Chars-a.Zancs and the New Act. 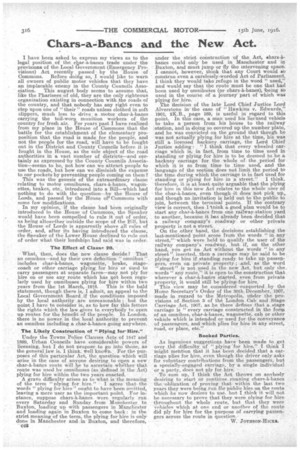 Page 12, 15th June 1916 — Chars-a.Zancs and the New Act.
Close
Noticed an error?
If you've noticed an error in this article please click here to report it so we can fix it.

I have been asked to express my views as to the legal position of the eller-a-banes trade under the provisions of the Local Government (Emergency Provisions) Act recently passed by the House of Commons. Before doing so, I would like to warn all owners of public motor vehicles that they have an implacable enemy in the County Councils Association. This august body seems to assume that, like the Pharisees of old, they are the only righteous organization existing in connection with.the roads of the country, and that nobody has any right even to step upon one of " their " roads unless clothed in soft slippers, much less to drive a motor char-a-hancs carrying the toil-worn munition workers of the country for fresh air. For years past I have realized from my place in the House of Commons that the battle for the establishment of the elementary proposition that the road is made for the people, and not the people for the road, will have to be fought out in the District and County Councils before it is fought in the House, as the sole object of the road authorities in a vast number of districts—and certainly as expressed by the County Countils Association—seems to be, not how can we attract people to use the roads, but how can we diminish the expense to our pockets by preventing people Coming on them?

This was the genesiF3 of the extraordinary clause relating to motor oritnibusee, chars-i-banes, wagonettes, brakes, etc, introduced into a Bill—which had -nothing to do with the question—by the House of Lords, and passed by the House of" Commons with some few modifications.

• In my opinion, if the clause had been originally introduced in the House 'of Commons, the Speaker would have been compelled to rule it out of order., as being altogether outside the scope of the. Bill, but the House of Lords is apparently above all rules of order, and, after its having introduced the clause, the Speaker of the Lower House declined to rule out of order what their lordships had said was in order.

The Effect of Clause 20.

What, then, does the new clause decide ? That an omnibus—and by their own definition" " omnibus " includes char-hebaries, wagonette, brake, stagecoach or other carriage plying for hire or used to carry passengers at separate fares—may not ply for hire on or use any route which has not been regularly used by omnibuses plying for hire within two years. from the let March, 1916. This is the bald statement, though there is,, I admit, a-n appeal to the Local Government Board if the conditions imposed by the local authority are unreasonable ; but the point I have to consider is, as to how far this fetters the rights which the law gives to everybody to open up routes for the .benefit of the people. In London, there is no power in the local authority, to prevent an omnibus including a char-h.-banes going anywhere.

The LAkely. Construction of "Prying for•Hire."

Under the Towns Police Clauses Acts of 1847 and 1899, Urban Councils have considerable powers of licensing, but I do not propose to go into those, as the general law; is. I think, well knonhi. For the purposes of this particular Act, the question which will arise in the case of anyene desiring, to open a new char-h-bancs route will be to ascertain whether that route was used by omnibuses (as defined in the Act) plying for hire within the two years enacted.

A grave difficulty arises as to what is the meaning of the term "plying for hire." I agree that the words "plying for hire" ought to have been omitted, leaving a mere user as the important point. For inz etance, suppose chars-à.banes were regularly icon every Saturday and Sunday . from Manchester to Buxton, loading up with passengers in Manchester and loading again in Buxton to come back : in the strict meaning of the term, the plying for hire is only done in Manchester and, in Buxton, and therefore, under the .strict construction of the Act, ishars-abailee could only be used in Manchester and ie Buxton, and must jump ar fly the intervening space. I cannot, however, think that any Court would no construe even a carelessly-worded Act of Parliament. I think they would take refuge in the word " used," and would say that the' route must be one that had been used by' omnibuses or chars-à-banes), 'being so used in the course of a journey part of which was plying for hire.

The 'decision of the late Lerd Chief Justice Lord Alverstone in the case of "Hawkins v. Edwards" 1901„ 2K.13., page 169, is useful in regard to this point. In this case, a man used his licensed vehicle to take a person from his house to the railway station, and in doing so covered up the number plate, and he was convicted on the ground that though he was not actually plying for hire at the time his was still a, licensed hackney carriage, the Lord Chief Justice adding "Ithink that every, wheeled carriage which is, in fact; from time to tithe used in standing or plying for hire is to be deemed to be a hackney carriage• for the whole of the period for which it is so from time to time used and the language of the section does not limit the period to the time during which the carriage is in fact Used for standing or plying for hire in a street." I think, therefore, it is at least quite arguable that the 'plying for hire in this new Act relates to the whole user of the cha.r-h-banes, even though it does not pick up,, and though no invitation is held out to the public to join, between the terminal points. If the contrary view is correct, then I think a good plan would be to start any char-inbanes from one railway-station yard to another, because it hats already been decided that a railway company's roadway or other private property is not a street. On the other hand, the decisions establishing the last-mentioned point arose from the words "in any street,' which were held to qualify the user of the railway company's roadway, but if, on the other hand, yciu get an Aotwithout the words "in any street" inserted, then a carriage may be said to be plying for hire if standing ready to take up passengers, even on private property ; and, as the word " street" is not lased in the new Act, but only the. words " any route," it is open to the construction that wherever a char-A-ba.ncs started, even from private property, it would still be plying'-for hire. This view may be considered supported by the Home Secretary's Order of the 20th December, 1907, made in regard to the Metropolis, under the provisions ofSection n of the London Cab and Stage Carriage Act, 1907, as he. there defines fhat a stage carriage is "every carriage constructed in the form of an omnibus, char-hebanes, wagonette, cab Or other vehicle which is intended or used for the conveyance of passengers, and which plies for hire in any Street, road, or place, etc."

As ingenious suggestions have been made to get over filo difficulty gf "plying 'for hire," I think I might mention that it has been decided that a carriage plies for hire, even though the driver only asks fbr voluntary contributions from the passengers. but a specially-engaged carriage, by a single individual or a party, does not ply for hire. To sum up, I think the Act throws on anybody desiring to start or continue running chars-h-bans the obligation of proving that within the last two years they were beingrun fbr public hire an the route which -he now 'desires to use, but I think it will not be, necessary to prove that they were plying for hire throughout the whole. route, but that they were Vehicles which at one end Or another of the route did ply for hire for the purpose of carrying passengers across the route in question. •