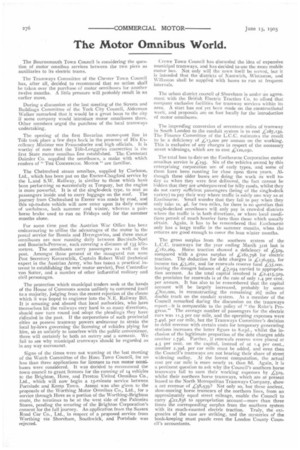 Page 6, 15th June 1905 — The Motor Omnibus World.
Close
Noticed an error?
If you've noticed an error in this article please click here to report it so we can fix it.
Keywords : Light Rail, Tram, Horsecar, Trams In London, Nottingham, Nottingham And District Tramways Company Limited, Transport In Brighton And Hove

The Bournemouth Town Council is considering the question of motor omnibus services between the two piers as auxiliaries to its electric trams.

The Tramways Committee of the Chester Town Council has, after all decided to recommend that no action shall be taken over the purchase of motor omnibuses for another twelve months, A little pressure will probably result in an earlier move.

During a discussion at the last meeting of the Streets and Buildings Committee of the York City Council, Alderman Walker remarked that it would be a great boon to the city if some company would introduce motor omnibuses there. Other members urged the purchase of the local tramways undertaking.

The opening of the first Bavarian motor-post line in TOlz took place a few days back in the presence of His Excellency Minister von Frauendorfer and, high officials. It is worthy of note that the Tolz-Leng-gries connection is the first State motor omnibus line established. The Cannstatt Daimler Co. supplied the omnibuses, a make with which readers of " THE COMMERCIAL MOTOR " are familiar.

The Chelmsford steam omnibus, supplied by Clarkson, Ltd., which has been put on the Exeter-Chagford service by the Land S.W. Railway, is similar to those which have been performing so successfully at Torquay, but the engine is more powerful. It is of the single-deck type, to scat 20 passengers inside and to carry luggage on the roof, The journey from Chelmsford to Exeter was made by road, and this up-to-date vehicle will now enter upon its daily round of usefulness, both summer and winter, whereas a pairhorse brake used to run on Fridays only for the summer months alone.

For some time past the Austrian War Office has beea endeavouring to utilise the advantages of the motor in the postal service for Bosnia and Herzegovina, and three motor omnibuses are now running daily between Bosnisch-Novi and Bosnisch-Petrovac, each covering a distance of 135 kilometres. The omnibuses carry passengers as well as the post. Amongst those present at the inaugural run were Post Secretary Kovarschik, Captain Robert Wolf (technical expert in the Austrian Army, who has taxen a practical interest in establishing the new motor service), Post Controller von Sotter, and a number of other influential military and civil personages.

The protection which municipal traders seek at the hands of the House of Commons seems unlikely to commend itself to a majority, judging from the recent rejection of the clause which it was hoped to engineer into the N.E. Railway Bill, It is amusing and absurd that local authorities, who have themselves hit the railways very hard in so many directions, should now turn round and adopt the pleadings they have ridiculed in the past. If the corporations of such provincial cities as possess tramway powers endeavour to strain the local by-laws governing the licensing of vehicles plying for hire, so as unfairly to interfere with the public convenience, there will certainly be both an outcry and a nemesis. We fail to see why municipal tramways should be regarded as in any way sacrosanct.

Signs of the times were not wanting at the last meeting of the Watch Committee of the Hove Town Council, for no less than three applications for licenses to run motor omnibuses were considered. It was decided to recommend the town council to grant licenses for the running of 14 vehicles to the Brighton, Hove, and Preston United Omnibus Co., Ltd„ which will now begin a 15-minute service between Portslade and Kemp Town. Assent was also given to the proposals of the Worthing Motor Omnibus Co., Ltd., for a service through Hove as a portion of the Worthing-Brighton route, the terminus to be at the west side of the Pahneira Stores, pending the securing of the Brighton Corporation's consent for the full journey_ An application from the Sussex Road Car Co., Ltd., in respect of a proposed service from Worthing via Shoreham, Southwick, and Portslade was rejected. Crewe Town Council has discarded the idea of expensive municipal tramways, and has decided to use the more mobile motor bus. Not only will the town itself be served, but it is intended that the districts of Nantwich, .Wistaston, and Willaston shall be supplied with buses to run at frequent intervals.

The urban district council of Shoreham is under an agreement with the British Electric Traction Co. to afford that company exclusive facilities for tramway services within its area. A start has not yet been made on the constructional work, and proposals are on foot locally for the introduction of motor omnibuses.

The impending conversion of seventeen miles of tramway in South London to the conduit system is to cost ;(287,150. The Finance Committee of the L.C.C. estimatts the result to be a deficiency of ..4;13,000 per annum on the working. This is exclusive of any charges in respect of the necessary street widenings, which are to cost .4.120,050.

The total loss to date on the Eastbourne Corporation motor omnibus service is ,'195. Six of the vehicles owned by this enterprising corporation are of early types, and some of them have been running for close upon three years. Although these older buses are doing the work as well today as when they were first delivered, the fact cannot be hidden that they are underpowered for hilly roads, whilst they do not carry sufficient passengers (being of the single-deck variety) to pay their way where traffic is solely one way as at Eastbourne. Small wonder that they fail to pay when they only take is. 4d. for two miles, for there is no question that single-decked omnibuses will only pay in crowded districts where the traflic is in both directions, or where local conditions permit of much heavier fares than those which usually obtain. Again, it has to be remembered that Eastbourne only has a large traffic in the summer months, when the returns are good enough to cover the lean winter months.

The gross surplus from the southern system of the L.C.C. tramways for the year ending March 31st last is .4;182,269. Horse traction showed a deficiency of .529, compared with a gross surplus of £i82,798 for electric traction. The deduction for debt charges is ,136,953, for income tax A.;3,261, and for renewals reserve fund L35,000, leaving the meagre balance of £7,054 carried to appropriation account. As the total capital involved is £2,415,329, the provision for renewals is at the rate of only 5.4 per cent. per annum. It has also to be remembered that the capital account will be largely increased, probably by some L,Soo,000, in reconstructing the remaining 26,. miles of double track on the conduit system. As a member of the Council remarked during the discussion on the tramways report—it is comparable to the policy of " the Rake's Progress." The average number of passengers for the electric car.; was 11.5 per car mile, and the operating expenses were 7.40. per ear mile, b:ut the Tramways Committee's decision to debit revenue with certain costs for temporary generating stations increases the latter figure to 8.03d., whilst the inclusion of the legitimate proportion of the debt charges adds another 1.75d. Further, if renewals reserve were placed at 4.5 per cent, on the capital, instead of at 1.4 per cent., another 2.39d. per car mile must be added, and even then the Council's tramways are not bearing their share of street widening outlay. At the lowest computation, the actual cost per car mile is more nearly is. than 8d. Again, it is a pertinent question to ask why the Council's southern horse tramways fail to earn their working expenses by .4-529, whilst their northern horse tramways, which are at present leased to the North Metropolitan Tramways Company, show a net revenue of .4:58,939? Not only so, but these ancient, slow-moving horse tramcars of the northern lines, from an approximately equal street mileage, enable the Council to carry ,*22,836 to appropriation account—more than three times the corresponding surplus from the southern system with its much-vaunted electric traction. Truly, the exigencies of the case are striking, and the mysteries of the book-keeping must puzzle even the London County Council's accountants.