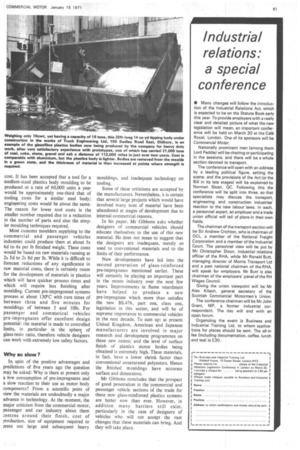 Page 63, 15th January 1971 — Industrial relations: a special conference
Close
Noticed an error?
If you've noticed an error in this article please click here to report it so we can fix it.
Keywords : Scottish Commercial Motormen's Union, Labor, Politics

• Many changes will follow the introduction of the Industrial Relations Act, which is expected to be on the Statute Book early this year. To provide employers with a really clear and detailed picture of what the new legislation will mean, an important conference will be held on March 30 at the Café Royal, London. One of its sponsors will be Commercial Motor.

Nationally prominent men (among them Lord Peddle) will be chairing or participating in the sessions, and there will be a whole section devoted to transport.

The conference will open with an address by a leading political figure, setting the scene, and the provisions of the Act (or the Bill in its late stages) will be explained by Norman Sloan, QC. Following this the conference will be split into three, so that specialists may discuss the transport, engineering and construction industries' reaction to the new labour laws. In each, a personnel expert, an employer and a trade union official will tell of plans in their own fields.

The conference chairman will be Mr John Grant, MP, a former industrial correspondent. The day will end with an open forum.

Organizing the event is Business and Industrial Training Ltd, to whom applications for places should be sent. The all-in fee (including documentation, coffee, lunch and tea) is £30.