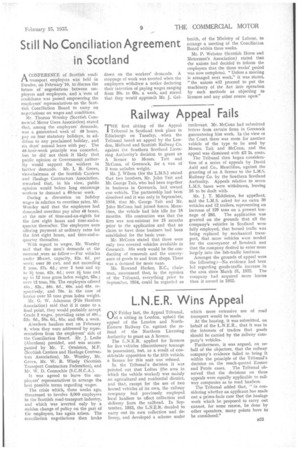 Page 39, 15th February 1935 — L.N.E.R. Wins Appeal
Close
Noticed an error?
If you've noticed an error in this article please click here to report it so we can fix it.

ON Friday last, the Appeal Tribunal, at a sitting in London, upheld the appeal of the London and NorthEastern Railway Co. against the refusal of the Northern Licensing Authority to grant an A licence.

The L.N.E.R, applied for licences for five vehicles (discretionary tonnage in possession), but, as a result of considerable opposition to the fifth vehicle, a licence for this unit was refused.

In the Tribunal's decision it was pointed out that Loftus (the area in which the vehicle worked) was mainly an agricultural and residential district, and that, except for the use of two horsed vehicles of its own, the railway company had previously employed local hauliers to effect collection and delivery from the railhead. In September, 1933, the L.N.E.R. decided to carry out its own collection and delivery, and developed a scheme under which more extensive use of road transport would be made.

At the hearing, it was submitted. on behalf of the L.N.E.R., that it was in the interests of traders that goods should be carried by the railway company's vehicles.

Furthermore, it was argued, on Dehalf of the objectors, that the railwat, company's evidence failed to bring it within the principle of the Tribunal's decision on the much-quoted Easton and Petrie cases. The Tribunal observed that the decisions on these appeals were equally applicable to railway companies as to road hauliers.

The Tribunal added that, in considering whether an applicant has made out a prima-facie case that the haulage work which he proposed to carry out cannot, for some reason, be done by other operators, many points have to be considered,"