TRANSPORT FOR A NEW TOWN. 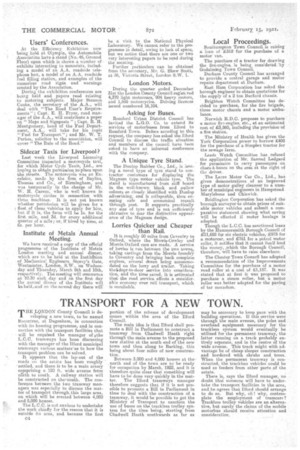 Page 8, 15th February 1921 — TRANSPORT FOR A NEW TOWN.
Close
Noticed an error?
If you've noticed an error in this article please click here to report it so we can fix it.

• well be required the manager of ethe L.C.C. tramways has been discussing with the manager of the Ilford municipal erarnways various matters'as to how the transport problem can be solved.

It appears that the lay-out of the roads on the estate has been roughly • settled, and there is to be a main artery comprising a 120 ft. wide avenue from rtgrth to south. A railway station will be constructed on theesbuth. The confereuce between the two tiamway managers was especially to discuss the matter of tran-spert through;this large area, on which will be erected between 4,000 and 5,000 houses.

The L.C.C. is not anxious to undertake the work chiefly for the reason that it is • outside its area, and because the first e4 portion of the scheme of development comes within the area of the Ilford Council.

The Main idea is that Ilford shall promote a Bill in Parliament to construct a tramway from Chadviell Heath right through the main avenue to the proposed new station at the south end of the new town and than along to Barking, this being about four miles of new construction.

Between 3,000 and 4,000 houses at thenorth end of the town are to be ready for occupation by Mara, 1922, and it is therefore quite clear that something will have to be done very quickly in the matter. The Ilford tramways manager therefore suggests that if it is not possible to promote a Bill in Parliament in time to deal with the construction of a tramway, it would be possible to get the Ministry of Transport to sanction the use of buses on the trackless trolley system for the time being, starting from ChedweIl Heath southwards as far as

may be necessary to keep pace with the. building operations. If this service were; through the main avenue, the poles and overhead equipment necessary for the trackless system would eventually be utilized for the permanent tramway, the latter running on a track probably entirely separate, and in the centre of the wide avenue, This track might with advantage be of cheap sleeper construction and bordered with shrubs and trees. When the permanent tramway is constructed, the trackless vehicles could be used as feeders from other parts of the estate.

There is, says the Ilford manager, no doubt that someone will have to undertake the transport facilities in the area, and lie agrees that Ilford should arrange to do so. But why, oh ! why, eenteire plate the employment of tramcars ? Trackless trolley vehicles are an alternative, but surely the claims of the mobile motorbus should receive attention and consideration.