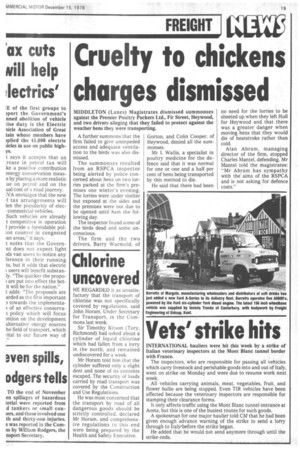 HE REGARDED it as unsatisfactory that the transport of chlorine was not specifically covered by regulations, said John Horam, Under Secretary for Transport, in the Commons last week.

Sir Timothy Kitson (Tory, Richmond) had asked about a cylinder of liquid chlorine which had fallen from a lorry in the north, and remained undiscovered for a week.

Mr Horam told him that the cylinder suffered only a slight dent and none of its contents escaped. The security of loads carried by road transport was covered by the Construction and Use Regulations, He was most concerned that the transport by road of all dangerous goods should be strictly controlled, declared Mr Horatn, and comprehensive regulations to this end were being prepared by the Health and Safety Executive.