Fuel for :the Mechanized Army 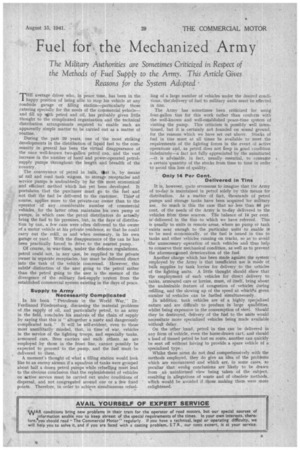 Page 27, 15th August 1941 — Fuel for :the Mechanized Army
Close
Noticed an error?
If you've noticed an error in this article please click here to report it so we can fix it.
Keywords :

THE average driver who, in peace time, has been in the happy position of being able to stop his vehicle at any

roadside garage or filling station—particularly those catering specially for the needs of the commercial yehicleand fill up vsith petrol and oil, has probably given little thought to the complicated organization and the technical distribution arrangements required to enable such an apparently simple matter to be carried out as a matter of routine. • During the past 20 years, one of the most striking developments in the distribution of liquid fuel to the community in general has been the virtual disappearance of the once well-known two-gallon petrol can, and the vast increase in the number of hand and power-operated petrolsupply pumps throughout the length ad breadth of the country.

The conveyance of petrol in bulk, at is, by means of rail and road tank wagons, to storage receptacles and service pumps is undoubtedly by far the most economical and efficient method which has yet been developed. It postulates that the purchaser must go to the fuel and not that the fuel be delivered to the customer. This.? of course, applies more to the private-car owner than to the operator of any considerable number of commercial vehicles, for the latter often maintains his own pump or pumps, in which case the petrol distributors do actually bring the fuel to his premises, but, in the days of distribution by can, a few cans were often delivered to the owner of a motor vehicle at his private residence, so that he could carry out the refill, as and when necessary, in his own garage or yard. With the disappearance of the can he has been practically forced to drive to the nearest pump..

Of course, in war-time, under the defence regulations, petrol could not, in any case, be supplied to the private owner in separate receptacles, but must be delivered direct into the tank of the vehicle concerned. However, this subtle distinction of the user going to the petrol rather than the petrol going to the user is the essence of the divergence of the military fuel-supply system from the established commercial system existing in the days of peace.

In his book " Petroleum in the World War," Dr. Ferdinand Friedensburg, discussing the material problems of the supply of oil, and particularly petrol, to an army in the field, concludes his analysis of the chain of supply by saying that this is "altogether a nasty and dangerously complicated task." It will be self-evident, even to those most unniilitarily minded, that, in time of war, vehicles in the service of the fighting troops, and especially tanks, armoured cars, Bren carriers and such others as are employed by those in the front line, cannot possibly be expected to proceed • to the pump, and the fuel must be delivered to them.

A moment's thought of what a filling station would look like to an enemy airman if a squadron of tanks were grouped about half a dozen petrol pumps while refuelli,ng must lead to the obvious conclusion that the replenishment of vehicles on active service must be carried out under conditions of dispersal, and not congregated around one or a few fixed points. Therefore, in order to achieve simultaneous refuel ling of a large number of vehicles under the desired conditions, the' delivery' of fuel to military units must be effected in tins.

The Army has sometimes, been criticized for using four-gallon tins for this work rather than conform with the well-known and well-established .peace-time system of visiting the pump. This criticism is possibly well intentioned, but it is certainly not founded on sound ground, for the reasons which we have set out above. Stocks of fuel in tins must at all times be available to meet the requirements of the fighting forces in the event of active operations and, as petrol does not leep in good condition indefinitely—a fact not fully appreciated by. the uninitiated —it is advisable, in fact, usually essential, to consume a certain quantityof the stocks from time to time in order to avoid this loss of quality.

It is, however, quite erroneous to imagine that the Army of to-day is maintained in petrol solely by this means for distribution. As a matter of fact, .thousands of petrol pumps and storage tanks have been acquired for military use. So much is this the case that no less than 86 per cent. of the needs of the Army is to-day delivered to the vehicles frbm. these sources. The balance of 14 per Tent. is delivered in the tins .to which we have referred. This is usually to units in remote areas, where no pump or tank exists near enough to the particular units' -to .enable it to be used economically, or the fuel is issued in tins to tanks and other vehicles running on tracks, so as to avoid ithe unnecessary 'operation of such vehicles and thus help to conserve their mechanical condition, as well as to prevent the aforementioned deterioration of the fuel.

Another charge which has been made against the system employed by the Army is that insufficient use is made of bulk supplies by tank lorries for delivery to the vehicles of the fighting units. A little thought should show that the employment of such vehicles for direct delivery to tanks, armoured cars or lorries, must, of itself, bring about the undesirable feature of congestion of vehicles during refilling, and the slowing up of the speed at which•a: given number of vehicles can be fuelled simultaneously.

In addition, tank vehicles are of a highly specialized nature and are difficult to produce in large quantities, whilst being expensive in the consumption of steel. Should they be destroyed, delivery of the fuel to the units would necessitate more specialized vehicles being made available without delay.

On the other hand, petrol in tins can be delivered in any form of vehicle, even the horse-drawn cart, and should a load of tinned petrol be lost en route, another can quickly be sent off without having to provide a spare vehicle of a specialized type. Whilst these notes do hot deal comprehensively with the methods employed, they do give an idea of the problems which are encountered and which are, in some cases, so peculiar that wrohg conclusions are likely to be drawn from an uninformed view being taken of the subject, resulting in allegations of waste and of obsolete methods, wIlich would be avoided if those making them were more enlightened.