A Plethora of Advisory Committees 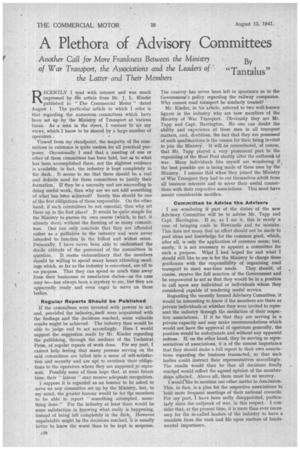 Page 22, 15th August 1941 — A Plethora of Advisory Committees
Close
Noticed an error?
If you've noticed an error in this article please click here to report it so we can fix it.
Keywords :

RECENTLY I read with interest and was much impressed by the article from Mr. J.. L. Kinder published in "The Commercial Motor" dated August I. The particular article to which I refer is that regarding the numerous • committees which have been set up by the Ministry of Transport at various times. As a man in the street. I venture to air my views, which I know to be shared by a large number of

Viewed from my standpoint, the majority of the committees in existence is quite useless for all practical purposes. Occasionally I read that a meeting of one or other of these committees has been held, but as to what has been accomplished there, not the slightest evidence is available; in fact, the industry is kept completely in the dark. It seems to me that there should be. a real and definite need for these committees to justify their formation. If they be a necessity and are succeeding in doing useful work, then why are we not told something of what has been achieved? Surely this should be one of the first obligations of those responsible. On the other hand, if such committees be not essential, then why set them up in the first place? It would be quite simple for the Ministry to pursue its own course (which, in fact, it s already does) without the forming of so many committees. One can only conclude that they are &tended rather as a palliative to the industry and were never intended to function in the fullest and widest sense. Personally. I have never been able to undersland the docile attitude of the personnel of the committees in question. It seems extraordinary that the members should be willing to spend many hours attending meetings which, so far as the industry is concerned, are all to no purpose. That they can spend so much time away from their businesses or association duties—as the case may be—has always been a.mystery to me, but they are apparently, ready and even eager to serve on these bodies.

. Regular Reports Should be Published If the committees were invested with powers to act, and, provided the industry...itself were acquainted with the findings and the decisions reached, some valuable results might be achieved. The industry then would be able to judge and to act accordingly. Here I would support the suggestion made by Mr. Kinder regarding the publishing, through the medium of the Technical Press, of regular reports of work done. For my part, I cannot help feeling that many persons serving on the said committees are lulled into a sense of self-satisfaction and security and are apt to overlook their obligations to the operators whom they are supposed...to represent. Possibly some of them hope that, at some future time, their " labour " may receive adequate recognition.

I suppose it is regarded as an honour to be asked to serve on any committee set up by the Ministry, but, to my mind, the greater honour would be for the members to be. able to report "something attempted, something done." For the industry at least there would be some satisfaction in knowing what really is happening, instead of being left Completely in the dark. However unpalatable might be the decisions reached, it is usually better to know the worst than to be kept in suspense. The country has never been left in ignorance as to the Government's policy regarding the railway companies. Why cannot road transport be similarly treated?

Mr. Kinder, in his article, referred to two well-known figures in the industry who are now members of the Ministry of War Transport. Obviously they are' Mr. Tapp and Capt. Barrington. No one ca,n doubt the ability and experience of these men in all transport matters, and, doubtless, the fact that they are possessed of such qualifications is the reason for their being invited to join the Ministry. It will be remembered, of course, that Mr. Tapp played a very prominent part in the organizing of the Meat Pool shortly after the outbreak of war. Many individuals like myself are wondering if, the best possible use is being made of these men by the Ministry. I assume that when they joined the Ministry of War Transport they had to cut themselves adrift from all business interests and to sever their useful connections with their respective associations. This must have meant considerable sacrifice.

Committee to Advise the Advisors

. I am wondering if part of the duties of the new Advisory Committee will be to advise Mr. Tapp and Capt. Barrington. If so, as I see it, this is surely a case of bringing coals to Newcastle and no mistake. This does not mean that an effort should not be made to pool ideas and knowledge for the common good, which, after all, is only the application of common sense; but, surely, it is not necessary to appoint a committee for such a purpose. What I had hoped for and what I should still like to see is for the Ministry to charge these gentlemen with the responsibility of organizing road transport to meet war-time needs. They should; of course, receive the full sanction of the Government and be empowered to act so that they would be in a position to call upon any individual or individuals whom they considered capable of rendering useful service.

Regarding the recently formed Advisory Committee, it would be interesting to know if the members are there as private individuals or whether they were invited to represent the industry through the mediation of their respective associations. If it be that they are serving in a private capacity and may make recommendations which would not have the approval of operators generally, the position would be unfortunate and without any apparent redress. If, on the other hand, they be serving as representatives of associations, it is of the utmost importance that they should make a full report to their own associations regarding the business transacted, so that such bodies could instruct their representatives accordingly. The results would then be that all decisions finally reachpd would reflect the agreed opinion of the memberships affected. Above all; there must be no secrecy.

I woulcrlike to mention one other matter in Conclusion. This, in fact, is a plea for the respective associations to hold more frequent meetings of their national councils. For my part, I have been sadly disappointed, particularly since the outbreak of war, in this respect. I consider that, at the present time, it is more than ever necessary for the so-called leaders of the industry to have a mandate from the rank and file upon matters of fundamental importance.