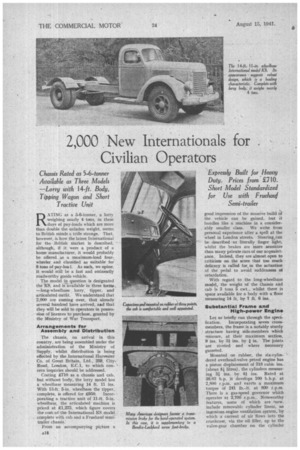 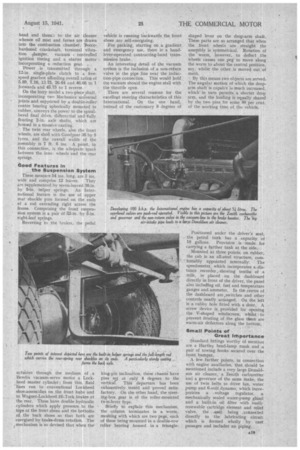 Page 20, 15th August 1941 — 2,000 New Internationals for .
Close
Noticed an error?
If you've noticed an error in this article please click here to report it so we can fix it.

RATING as a 5-6-tonner, a lorry weighing nearly 4 tons, in these days of pay-loads which are more than double the unladen weight, seems to British milkls a trifle strange. That, however, is how the latest International for the British Market is described, although. if it were a product of a home manufacturer, it would probably be offered as a maximum-load fourwheeler and classified as suitable for 8 tons of pay-load. As such, we opine, it would still be a fast and eminently roadworthy goods vehicle.

The model in question is designated the 1(8, and is availablein three forma , —long-wheelbase lorry, tipper, and articulated outfit. We understand that 2,000 are coming over, that already several hundred have arrived, aad that they will he sold to operators in possession of licences to purchase, granted by the Ministry of War Transport.

Arrangements for Assembly and Distribution

The chassis, on arrival in this country, are being assembled under the administration of the Ministry of Supply, whilst distribution is being effected by the International Harvester Co. of Great Britain, Ltd., 259, City. Road, London, E.C.1, to which concern inquiries should be addressed.

Costing £710 as a chassis and cab, but without body, the lorry model has a wheelbase measuring 14 ft. 11 ins. With I3-ft. 5-in, wheelbase the tipper, complete, is offered for £9511 Incorporating a tractive unit of 11-ft. 5-in. wheelbase, the articulated machine is priced at £1,275, which figure covers the coat of the International K8 model complete with cab and a Fruehauf semitrailer chassis.

From an accompanying picture a

good impression of the massive build of the vehicle can he gained, but it handles like a machine in a considerably smaller class. We write from personal experience after a spell at the wheel in London streets. Steering,ean be described as literally finger light; whilst the brakes are more sensitive than many private cars of our acquaintance. Indeed, they are almost open to criticism on the score that too much delicacy is called for, in the actuation of the pedal to avoid suddenness of retardation.

With regard to the long-wheelbase model, the weight of the chassis and cab Is 3 tons 5 cwt., whilst there is space available for a body with a-floor Measuring 14 ft. by 7 ft. 6 ins.

Let us briefly run through the speci

fication. Incorporating seven crossmembers, the frame is a notably sturdy structure havirg side-members which measure, at their maximum section, 9 ins, by 34 ins. by 1 in. The joints are riveted and where necessary gusseted.

Mounted on rubber, the six-cylindered overhead-valve petrol engine has a piston displacement of 318 cubic ins. (about 5f litres), the cylinders measuring n ins, by 4i ins, Rated at 36.03 h.p, it develops 100 b.h.p. at 2,800 r.p.m. and exerts a maximum torque of 241 lb.-ft. at 800 r.p.m. There is a gas-speed governor which operates at 2,700 r.p.m., Noteworthy features, some of which are enew, include removatA:: cylinder liners, an ingenious engine ventilation system, b3r which a current of air flows into the crankcase, via the oil filler, up to the valve-gear chamber on the cylinder

On the lorry model a two-piece shaft, incorporating two Mechanics universal joints and supported by a double-roller' centre bearing spherically mounted in rubber, conveys the power to the spiralbevel final drive, differertial and .fully floating 2-in, axle shafts, which are ,housed in a massive casting.

The twin rear wheels, also the front wheels, are shod with Goodyear 36 by 8 tyres, and the overall width of the assembly is 7 ft. 6 ins. A point, in this connection, is the adequate space between the inne: wheels and the rear springs.

Good Features in the Suspension System

These measure 54 ins, long, are 3 ins. wide and comprise 12 leaves. They are supplemented by seven-leaved 36-in. by 3.in. helper springs. An International feature is the use of upper rear shackle pins formed on the ends of a rod extending right across the frame. Comprising the front suspension system is a pair of 52-in. by 3-in. eight-leaf springs.

Reverting to the brakes, the pedal

acttiates through the medium of a Bendix vacuum-servo motor a Lockheed master cylinder ; from this, fluid `lines run to conventional Lockheed shoe-assemblies on the front hubs and to Wagner-Lockheed Hi-Tork brakes at the rear. These have double hydraulic cylinders which apply pressure to the tops of the front shoes and the bottoms of, the back shoes so that both are energized by brake-drum rotation. The /mechanism is so devised that when the

vehicle is running hackwards the front shoes are self-energizing.

For parking, starting on, a gradient and emergency use, there is a handlever-operated contracting-band transmission brake.

An interesting detail of the vacuum system is the inclusion of a non-re4urn valve in the pipe line near the induction-pipe connection. This would hold the vacuum should the engine stall with the throttle open. There are several reasons for the excellent steering characteristics of this International. On the one hand, instead of the customary 8 degrees of king-pin inclination, these chassis have pins se at only 4 degrees to the vertical. This departure has been exhaustivelytested and proved satisfactory. On the other hand, the steering-box gear is of the roller-mounted twin-lever type.

Briefly to explain this mechanism, the column terminates in a worm, meshing with which are two pegs, each of these being mounted in a double-row roller bearing housed. in a triangle shaped lever on the drop-arm shaft. These parts are so arranged that when the front wheels are straight the assembly is symmetrical. Rotation of the' worm, however, to deflect the wheels causes one peg to move along the worm to about the central position, say, whilst the other is moved out of mesh. • ' By this means two objects are served. The angular motion of which the droparm shaft is capab!e is much increased, which' in turn permits a shorter drop arm, and the loading is equally shared by the two pins for some 80 per cent. of the working time of the vehicle.

Positioned under the driver's seat, the petrol tank has a capacity of 18 gallons. Provision is • -made for carrying a further tank at the side.

Mounted at three points, on rubber, the cab is an all-steel structure, comfortably appointed internally. The speedometer, which incorporates a-distance recorder , showing tenths of a mile, is placed • on the dashboard directly in front of the driver, the panel also including oil. fuel and temperature gauges and ammeter. In the centre of the dashboard are ,switches and other controls neatly arranged. On the left is a cubby hole fitted with a door. A screw device is proVided for opening the V-shaped windscreen, whilst to prevent frosting of the glass there are warm-air deflectors along the bottom.

Standard fittings worthy of mention are a Hartley head-lamp mask and a pair of towing hooks secured over the front bumper.

A few further points, in connection with engine auxiliaries, that should be mentioned include a very large Donaldson air cleaner, • a Zenith carburetter and a governor of the same make, the use of twin belts to drive fan, water pump and 6-volt dynamo, which incorporates a voltage regulator, a mechanically sealed water-pump gland and a built-in oil filter with 'easily, , renewable cartridge element and relief valve, the unit being _connected directly to the lubricating circuit which is formed wholly by cast passages and includes no piping.