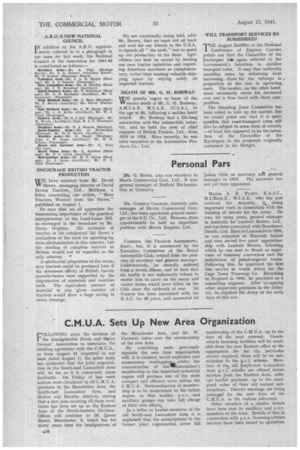 Page 18, 15th August 1941 — Personal Pars
Close
Noticed an error?
If you've noticed an error in this article please click here to report it so we can fix it.
Keywords : British Leyland, Leyland Motors, Morris Motor Company

lea. G. ROWE, who was secretary to Morris Commercial Cars, Ltd., i now general manager of Nuffield Mechanisation at Coventry.

MR. GORDON GRAHAM, formerly sales manager of Morris Commercial Cars, Ltd., has been appointed general manager of the S.U. Co., Ltd. Between these appointments he held an important position with Morris Engines, Ltd.

COMMDR. SIR FRANCIS ARMSTRONG, BART., has, it is announced by the Executive Committee of the Royal Automobile Club, retired from the position of secretary and general manager. Unfortunately, he recently suffered from a severe illness, and he feels that his health is not sufficiently robust to enable him to carry on the many and varied duties which have -fallen on the Club since the outbreak of war. Sir Francis has been associated with the R.A.C. for 40 years, and succeeded Sir

Julian Orde as secretary an general manager in 1923. His successor has not yet been appointed.

MAJOR A. E. PLANT, R.A.S.C., M.I.IVIech.E., M.I.A.E., who has just received his majority, is._ doing important work in connection with the training of drivers for the Army. He was, for many years, general manager in Australia for Leyland Motors, Ltd., and was later associated with Beardmore Diesels, Ltd. l'Iorn in Lancashire in 1886, he was educated at Warwick School and then served five years' apprenticeship with Leyland Motors, following which he was sent to Brazil as supervisor of tramway conversion and the installation of petrol-engined trams. Following this, he organized the first bus service in South Africa for the CapeTown Tramway Co. Returning to England in 1932, he practised as a consulting engineer. After occupying other important positions in the industry, he rejoined the -Army irt the early days of this war.