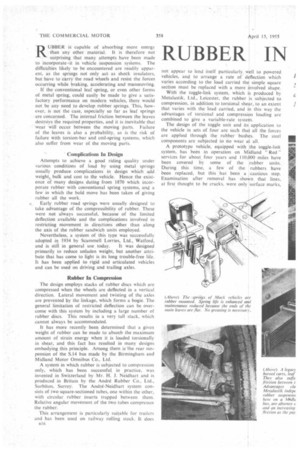 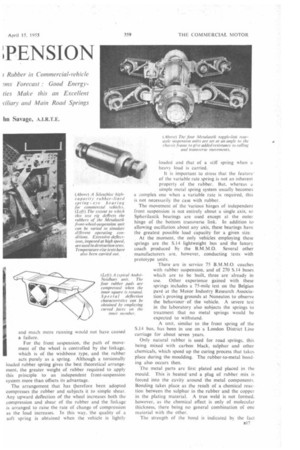 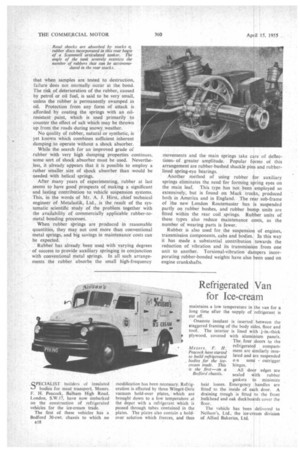 hn Savage, A.1.R.T.E. RUBBER is capable of absorbing more energy than any other material. It is therefore not surprising that many attempts have been made to incorporate 'it in vehicle suspension systems. The difficulties likely to be encountered are readily apparent, as the springs not only act as shock insulators, but have to carry the road wheels and resist the forces occurring while braking, accelerating and manceuvring.

If the conventional leaf spring, or even other forms of metal spring, could easily be made to give a satisfactory performance on modern vehicles, there would not be any need to develop rubber springs. This, however, is not the case, especially so far as leaf springs are concerned. The internal friction between the leaves destroys the required properties, and it is inevitable that wear will occur between the moving Parts. Failure of the leaves is also a probability, as is the risk of failure with torsion-bar and coil-spring systems, which also suffer from wear of the moving parts.

Attempts to achieve a good riding quality under various conditions of load by using metal springs usually produce complications in design which add weight, bulk and cost to the vehicle. Hence the existence of many designs dating from 1870 which incorporate rubber with conventional spring systems, and a few in which the bold move has been taken of giving rubber all the work. • Early rubber road springs were usually designed to take advantage of the compressibility of rubber. These were not always successful, because of the limited deflection available and the complications involved in restricting movement in directions other than along the axis of the rubber sandwich units employed.

Nevertheless, a system of this type was successfully adopted in 1934 by Scam mell Lorries, Ltd., Watford, and is still in general use today. It was designed primarily to reduce unladen weight, but another attribute that has come to light is its long trouble-free life. It has been applied to rigid and articulated vehicles and can be used on driving and trailing axles.

Rubber In Compression The design employs stacks of rubber discs which are compressed when the wheels are deflected in a vertical direction. Lateral movement and twisting of the axles are prevented by the linkage, which forms a bogie. The general limitation of restricted deflection can be overcome with this system by including a large number of rubber discs. This results in a very tall stack, which cannot always be accommodated.

It has more recently been determined that a given weight of rubber can be made to absorb the maximum amount of strain energy when it is loaded torsionally in shear, and this fact has resulted in many designs embodying this principle. Among them is the rear suspension of the S.14 bus made by the Birmingham and Midland Motor Omnibus Co., Ltd.

A systerri in which rubber is subjected to compression only, which has been successful in practice, was invented in Switzerland by Mr. H. J. Neidhart and is produced in Britain by the Andre Rubber Co., Ltd., Surbiton, Surrey. The Andre-Neidhart system consists of two square-sectioned tubes, one within the other, with circular rubber inserts trapped between them. Relative angular movement of the two tubes compresses the rubber.

This arrangement is particularly suitable for trailers and has been used on railway rolling stock. It does nI6 not appear to lend itself particularly well to powered vehicles, and to arrange a rate of deflection which varies according to the load carried the simple square section must be replaced with a more involved shape.

With the toggle-link system, which is produced by Metalastik, Ltd., Leicester, the rubber is subjected to compression, in addition to torsional shear, to an extent that varies with the load carried, and in this way the advantages of torsional and compression loading are combined to give a variable-rate systern.

The design of the toggle unit and its application to the vehicle in sets of four are such that all the forces are applied through the rubber bushes. The steel components are subjected to no wear at all.

A prototype vehicle, equipped with the toggle-link system, has been in operation on Midland "Red" services for about four years and 110.000 miles have been covered by some of the rubber units. During this time, a few of the rubbers have been replaced, but this has been a cautious step. Examination after removal has shown that lines, at first thought to be cracks, were only surface marks,

and much more running would not have caused a failure.

For the front suspension, the path of move ment of the wheel is controlled by the linkage.

which is of the wishbone type, and the rubber acts purely as a spring. Although a torsionally loaded rubber spring gives the best theoretical arrangement, the greater weight of rubber required to apply this principle to an independent front-suspension system more than offsets its advantage.

The arrangement that has therefore been adopted compresses the rubber and subjects it to simple shear. Any upward deflection of the wheel increases both the compression and shear of the rubber and the linkage is arranged to raise the rate of change of compression as the load increases. In this way. the quality of a soft spring is obtained when the vehicle is lightly loaded and that of a stiff spring when a heavy load is carried.

It is important to stress that the feature' of the variable rate spring is not an inherent property of the rubber. But, whereas a simple metal spring system usually becomes a complex one when a variable rate is required, this is not necessarily the case with rubber.

The movement of the Various hinges of independent front suspension is not entirely about a single axis, so Sphcrilastik bearings are used except at the outer hinge of the bottom transverse link. In addition to allowing oscillation about any axis, these bearings have the greatest possible load capacity for a given size.

At the moment, the only vehicles employing these springs are the S.l4 lightweight bus and the luxury coach produced by the 13.M.M.O. Several other manufacturers are, however, conducting tests with prototype units.

There are in service 75 B.M.M.O. coaches with rubber suspension, and of 270 S.I4 buses which are to be built, three are already in use. Other experience gained with these springs includes a 75-mile test on the Belgian pave at the Motor Industry Research Association's proving grounds at Nuneaton to observe the behaviourof the vehicle. A severe test in the laboratory also subjects the springs to treatment that no metal springs would be expected to withstand.

A unit, similar to the front spring of the S.I4 bus, has been in use on a London District Line carriage for about seven years.

Only natural rubber is used for road springs, this being mixed with carbon black, sulphur and other chemicals, which speed up the curing process that takes place during the moulding. The rubber-to-metal bonding also occurs then.

The metal parts are first plated and placed in the mould. This is heated'and a plug of rubber mix is forced into the cavity around the metal components. Bonding takes place as the result of a chemical reaction between the sulphur in the rubber and the copper in the plating material. A true weld is not formed, however, as the chemical effect is only of molecular thickness, there being no general combination of one material with the other.

The strength of the bond is indicated by the fact that when samples are tested to destruction, failure does not normally occur at the bond.

The risk of deterioration of the rubber, caused by petrol or oil fuel, is said to be very small, unless the rubber is permanently swamped in oil. Protection from any form of attack is afforded by coating the springs with an oilresistant paint, which is used primarily to counter the effect of salt which may be thrown up from the roads during snowy. weather.

No quality of rubber, natural or synthetic, is yet known which combines sufficient inherent damping to operate without a shock absorber.

While the search for an improved grade of rubber with very high damping properties continues, some sort of shock absorber must be used. Nevertheless, it already appears that it is possible to employ a rather smaller size of shock absorber than would be needed with helical springs. After many years of experimenting, rubber at last seems to have good prospects of making a significant and lasting contribution to vehicle suspension systems. This, in the words of Mr. A. J. Hirst, chief technical engineer of Metalastik, Ltd., ,is the result of the sys tematic scientific study of the problem together with the availability of commercially applicable rubber-to metal bonding processes.

When rubber springs are produced in reasonable quantities, they may not cost more than conventional metal springs, and big savings in maintenance costs can be expected.

Rubber has already been used with varying degrees of success to provide auxiliary springing in conjunction with conventional metal springs. In all such arrangemerits the rubber absorbs the small high-frequency movements and the main springs take care of deflections. of greater amplitude. Popular forms of this arrangement are rubber-bushed shackle pins and rubberlined spring-eye bearings.

Another method of using rubber for auxiliary springs eliminates the need for forming spring eyes on the main leaf. This type has not been employed so extensively, but is found on Mack trucks, produced both in America and in England. The rear sub-frame of The new London Routemaster bus is suspended partly on rubber bushes, and rubber bump units are fitted within the rear coil springs. Rubber units of these types also reduce maintenance costs, as the number of wearing parts is fewer.

Rubber is also used for the suspension of engines, transmission components, cabs and bodies. In this way it has made a substantial contribution towards the reduction of vibration and its transmission from one unit to another. Torsional-vibration dampers incor.porating rubber-bonded weights have also been used on engine crankshafts.