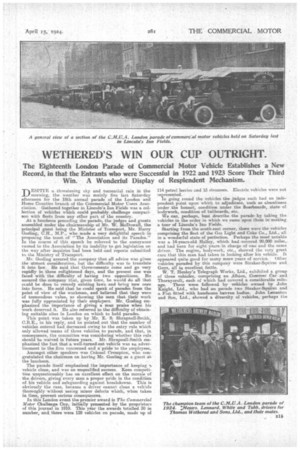 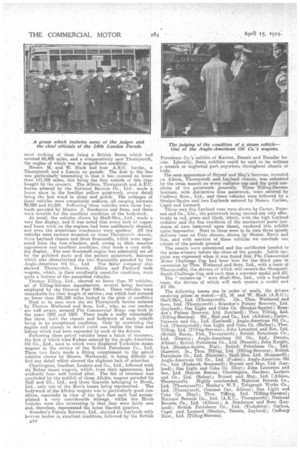 The Eighteenth London Parade of Commercial Motor Vehicle Establishes a New Record, in that the Entrants who were Successful in 1922 and 1923 Score Their Third Win. A Wonderful Display of Resplendent Mechanism.

irsiESPITE a threatening sky and 'torrential rain in the ..Ls/morning, the weather was mainly fine last Saturday afternoon for the 18th annual parade of the London and Home Counties branch of the Commercial Motor Users Association. Gathered together in Lincoln:el Inn Fields was a eelkction of vehicles which could probably challenge comparison with fleets from any other part of the country.

At a luncheon preceding the parade, the judges and guests assembled under the chairmanship of Mr. W. McDowell, the principal guest being the Minister of Transport, Mn Harry Gosling, C.H., M.P., who made a very delightful speech in proposing the toast. of "The Association and its Parades." In the course of this speech he referred to the annoyance caused to the Association by its inability to get legislation on the way after inquiries had been held and reports submitted trs the Ministry of Transport.

Mr. Gosling assured the company that all advice was given the utmost consideration, but the difficulty was to translate it into law. He said that Governments come and go very rapidly in these enlightened days, and the present one was faced with the difficulty of having two oppositions. He assured the company that, given time, he would do all that cculd be done to remedy existing laws and bring new ones into force. He said that he could speak of parades from the point of view of the workman, and believed that they were of tremendous value, as showing the men that their work was fully appreciated by their employers. Mr. Gosling emphasized the importance of giving a man praise when his work deserved it. Ile also referred to the difficulty of obtaining suitable sites in London on which to hold parades.

This point was taken up by Mr. E. S. Shrapnel-Smith, C.B.E., in his reply, and he pointed out that the number of vehicles entered had decreased owing to the entry rule which only allowed teams Of three vehicles to parade, and that, in consequence, the committee was considering whether this rale should be waived in future years. Mr. Shrapnell-Smith emphasized the fact that a. well-turned out. vehicle was an advertisement to the .firm concerned and a" pride to the employees.

Amongst other speakers was Colonel Crompton, who congratulated the chairman on having Mr. Gosling as a guest at the luncheon.

The parade itself emphasized the importance of keeping a vehicle clean, and was an unqualified suceess. Keen competitioe unquestionably has an excellent effect on the morale of the drivers, giving every man a proper pride in the condition of his vehicle and safeguarding against breakdowns. This is obviously the case, because a driver cannot clean a vehicle thorceighly without seeing minor defects which; when taken in tithe, prevent serious consequences.

In this London event the premier award is The Commercial Motor Challenge Cup, initially presented by the proprietors of this journal in 1910. This year the awards totalled 30 in number, and there were 129 vehicles on parade, made up of

114 petrol lorries and 15 steamers. Electric vehicles were not represented. In geing round the vehicles the judges each had an independent point upon which to adjudicate, such as cleanliness under the bonnet, condition under the floorboards, state of borly-wark, condition of tailboards, etc. We can, perhaps, best describe the parade by taking the velaieles in the order in which we came upon them in making a tour of Lincoln's inn Fields.

Starting from the south-east corner, there were the vehicles comprising the fleet of the flee Light and Coke Co., Ltd., all in a wonderful state of perfection. Perhaps the most elotabie was a 14-years-old Halley, Which had covered 90,000 miles,, and had been for eight years in charge of one and the same driver. The engine, bodywork, etc. showed the very great care that this man had taken in looking after his vehicle. ft. appeared quite good for many more years of service. Other vehicles paraded by this company were Straker-Squires and Gays, all in excellent fettle. W. T. Henley's Telegraph Works, Ltd., exhibited a group of three vehicles, comprising an Albion, Commer Car and Thornycroft, each of Which had covered a considerable mileage. These were followed by vehicles owned by John Knight, Ltd., who bad en parade two Straker-Sqmres and a Fiat. fitted with handsome bisxvan bodies. John Lenanton and Son, Ltd., showed a diversity of vehicles, perhaps the

most striking of them being a British Berna which had covered 68,400 miles, and a comparatively new 'Thornycroft, the engine of which Was in magnificent condition. Messrs. M. and W. Mack had four AEC. lorries, a Thornycroft and a Lancia on parade. The first in the line was particularly interesting in that it has covered no fewer than 111,500 miles, this being the first vehicle of this typo bought, by the concern. Th5 Albion, Thornycroft and A.E.C. lorries entered by the National Bei-17,01e Co., Ltd., made a brave show in the familiar yellow paintwork every detail being the last word in shine and polish. The mileages of these .vehicles were remarkably uniform, all ranging between 40,000 and 65,000. Following these vehicles were three Leylands paraded by Messrs. A. Sanderson and Sons, and these were notable for the excellent condition of the bodywork. As usual, the vehicles shown by Shell-tlex,.Ltd., made a very fine display, and it was noted that every inch of copper and brass work on the engines had been assiduously cleaned, and even the aluminium crankcases were spotless. All the vehicles were tankers mounted on three Thornycroft chassis, three Leyland chassis and three Scammells, which were segmented from the four-wheelers, and, owing to their massive appearance and excellent condition, they made A very striking display. The neat Searnmell engine was admirably set off by the polished parts and the perfect paintwork. features which also characterized the two Seaman°lls paraded by the

Anglo-American Oil Co. Ltd. The latter company also showed Thornyerhft, Dennis, Albion and Packard tank wagons, which, in their excellently cared-for condition, were quite a feature of the assembled 'vehicles.

Thomas Tilling.Ltd., showed no fewer than 12 vehicles, all of Tilling-Stevens manufacture, several being boxvans employed by the General Post Office. These vehicles were remarkable for their length of service; one which had covered no fewer than 286,500 miles looked in the pink of condition " Next to be seen were the six Thornycroft lorries entered by Thomas Wethered and Sons, Ltd., who, as our readers are well aware, secured The Commercial Motor cup both in the years 1922 and 1923. These made a really remarkably fine show, both the chassis and bodywork of each vehicle being in an exceptional condition. Only by examining the engine and chassis in detail could one realize the time and labour which had been expended by each of the drivers. Following these petrol vehicles came a batch of steamers, the first of which were Fodens entered by the Anglo-American Oil Co., Ltd., next to which were displayed Yorkshire steam wagons in the service of the British Petroleum Co., Ltd. These two fleets made a fitting complement to the petrol vehicles shown by Messrs. Wethereds, it being difficult to find any detail which showed the slightest lack of attention.

Charrington, Gardner, Lockett-and Co., Ltd., followed with six Robey steam wagons, which, from their appearance, had evidently been well looked after. The list of steamers was concluded by the exhibit of three Allchin wagons paraded by Hall and Co., Ltd., and three Garretts belonging to Bevis, Ltd., only one of the Hovis teams being represented. The bodywork of the Allehin wagons was in particularly good condition, especially in view of the fact that each had accomplished a very considerable mileage, whilst the Hovis vehicles were also interesting in that they were fairly new and, therefore, represented the 'latest Garrett practice.

Brandon's Putney Brewery, Ltd., showed six Leylands with boxvan bodies in excellent condition, followed by the British 1118 Petroleum Co.'s exhibit of Karrier, Dennis and Daimler lorries. Literally, these exhibits could be said to be without a scratch or neglected part anywhere throughout chassis or body.

The neat appearance of Bryant and May's boxyans, mounted on Albion, Thornycroft and Leyland chassis, was enhanced by the swan mascot on every radiator cap and the good condition of the paintwork generally. Three Tilling-Stevens boxyams, with distinctive blue paintwork, were entered by Cadbury Bros., Ltd„ and these vehicles were followed by a Straker-Squire and two Leylands entered by Messrs. Carless, Capel and Leonard.

Three very fine Leyland vans were shown by Carter, Paterson and Co., Ltd., the paintwork being carried-out very effectively-in red, green and black, which, with the high Leyland radiator and the fine -condition of the mechanical parts (evidence of care -bestowed upon them), reradered thie exhibit quite impressive. Next to these were to be seen three speedy delivery vans on Unic chassis, shown by Messrs. Davis and Son, and with mention of these vehicles we conclude our circuit of the parade ground.

The results were announced and the certificates handed to the prize-winners before the close of the parade. Little surprise was expressed when it was found that The Commercial Motor Challenge Cup had been won for the third year in succession by Thos. Wethered and Sons, Ltd., with a team of Thornycrofts, the drivers of which will receive the ShrapnellSmith Challenge Cup and each man a souvenir medal and £2. The " runners-up" were Shell-Max, Ltd., with a Leyland team the drivers of which will each receive a medal and £1 lbs.