CROSSING WATER Glasgow City Council has given the go-ahead for 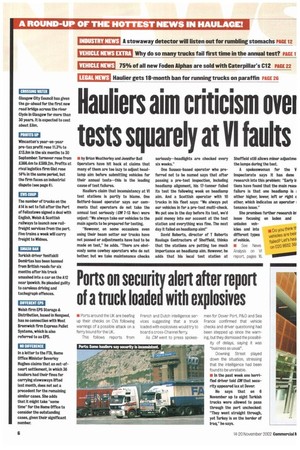 Page 6, 14th November 2002 — CROSSING WATER Glasgow City Council has given the go-ahead for
Close
Noticed an error?
If you've noticed an error in this article please click here to report it so we can fix it.
Keywords : Roads In England, Port Of Felixstowe, Felixstowe, Hengoed, A14 Road

the first new road bridge across the river Clyde in Glasgow for more than 30 years. It is expected to cost about £8m.

EIR NIP The number of trucks on the A14 is set to fall after the Port of Felixstowe signed a deal with English, Welsh & Scottish railways to launch new railfreight services from the port. Five trains a week will carry freight to Widnes.

SMASH WI Turkish driver Yen ifakili Demirtas has been banned from British roads for six months after his truck smashed into a car on the Al2 near Ipswich. He pleaded guilty to careless driving and tachograph offences.

Welsh firm EPS Storage & Distribution, based in Hengoed, has no connection with West Bromwich firm Express Pallet Systems, which is also referred to as EPS.

NO DIFFERENCE In a letter to the FTA, Home Office Minister Beverley Hughes claims that an out-ofcourt settlement, In which 36 hauliers had their fines for carrying stowaways lifted last month, does not set a precedent for the remaining similar cases. She adds that it might take some time" for the Home Office to consider the outstanding cases, given their significant number,