Time for a rate review 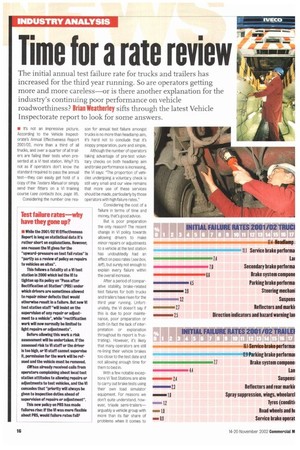 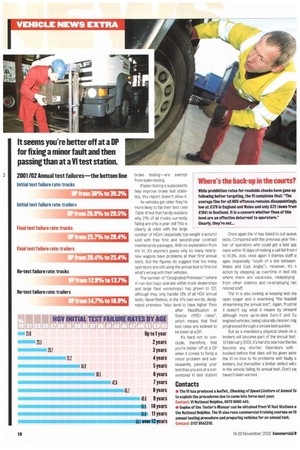 Page 16, 14th November 2002 — Time for a rate review
Close
Noticed an error?
If you've noticed an error in this article please click here to report it so we can fix it.
Keywords : Semi-trailer Truck, Truck, Car Safety, Road Transport, Mot Test

The initial annual test failure rate for trucks and trailers has increased for the third year running. So are operators getting more and more careless—or is there another explanation for the industry's continuing poor performance on vehicle roadworthiness? Brian Weatherley sifts through the latest Vehicle Inspectorate report to look for some answers.

• It's not an impressive picture. According to the Vehicle Inspectorate's Annual Effectiveness Report 2001/02, more than a third of all trucks, and over a quarter of all trailers are failing their tests when presented at a VI test station. Why? It's not as if operators don't know the standard required to pass the annual test—they can easily get hold of a copy of the Testers Manual or simply send their fitters on a VI training course (see contacts box, page 181.

Considering the number one rea

son for annual test failure amongst trucks is no more than headlamp aim, it's hard not to conclude that sloppy preparation, pure and simpL.

Although the number of operator:. taking advantage of pre-test voluntary checks on both headlamp aim and brake performance is increasing, the VI says: "The proportion of vehicles undergoing a voluntary check is still very small and our view remains that more use of these services should be made, particularly by those operators with high failure rates."

Considering the cost of a failure in terms of time and money, that's good advice.

But is poor preparation the only reason? The recent change in VI policy towards allowing drivers to make minor wars or adjustments to a vehicle at the test station has undoubtedly had an effect on pass rates ( see box, left), but surely not enough to explain every failure within the overall increase.

After a period of comparative stability, brake related test failures for both trucks and trailers have risen for the third year running. Unfortunately, the VI doesn't say if this is due to poor maintenance, poor preparation or both fin fact the lack of interpretation or explanation throughout its report is frustrating). However, it's likely that many operators are still re-lining their vehicle brakes too close to the test date and not allowing enough time for them to bed in.

With a few notable exceptions VI Test Stations are able to carry out brake tests using their own load simulator equipment, For reasons we don't quite understand, however, triaxle semi-trailersarguably a vehicle group with more than its fair share of problems when it comes to brake testing—are exempt from laden testing.

As vehicles get older they're more likely to fail their test (see Table 41 but that hardly explains why 21% of all trucks currently failing are only a year old! This is clearly at odds with the large number of HGVs (especially top-weight tractors) sold with free first and second-year contract maintenance packages. With no explanation from the VI, it's anyone's guess why so many nearlynew wagons have problems at their first annual tests. But the figures do suggest that too many operators are still using the annual test to find out what's wrong with their vehicles.

The number of "Designated Premises" (where VI-run test bays operate within truck dealerships and large fleet workshops) has grown to 127, although they only handle 13% of all HGV annual tests. Nevertheless, in the VI's own words, designated premises "also tend to have higher Pass after Rectification at Station (PRS) rates", which means that final test rates are inclined to be lower at a DP.

Ft's hard not to conclude, therefore, that you're better off at a DP when it comes to fixing a minor problem and subsequently passing your test than you are at a conventional VI test station! Once again the VI has failed to cut queue tests. Compared with the previous year the ber of operators who could get a test apr ment within 18 days of making a call fell from to 81.5%. And, once again it blames staff sl ages (especially "south of a line between Wales and East Anglia"). However, it's ti action by stepping up overtime in test sta where there are vacancies, redeploying from other stations and re-employing rec retired staff.

The VI is also looking at keeping test sta open longer and is examining "the feasibili streamlining the annual test". Again, frustrat it doesn't say what it means by streamli although more up-to-date Euro-2 and Eu engined vehicles, being naturally cleaner, mig progressed through a smoke test quicker.

But as a mandatory physical check on s limiters will become part of the annual test 13 February 2003, it's hard to see how the tes become any shorter. Operators with booked before that date will be given advic the VI on how to fix problems with faulty s limiters, but thereafter a limiter defect will r in the vehicle failing its annual test. Don't sa; haven't been warned.