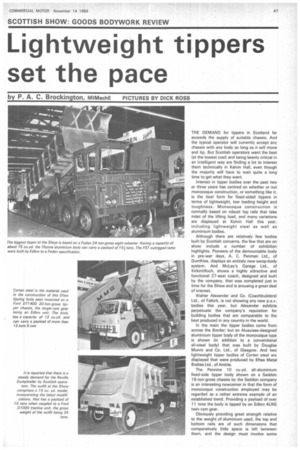 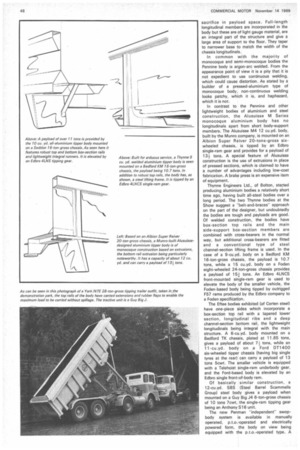 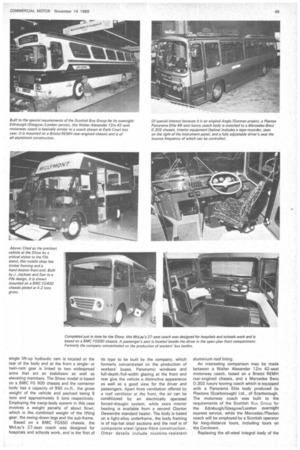 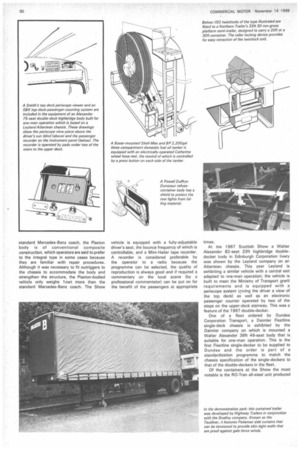 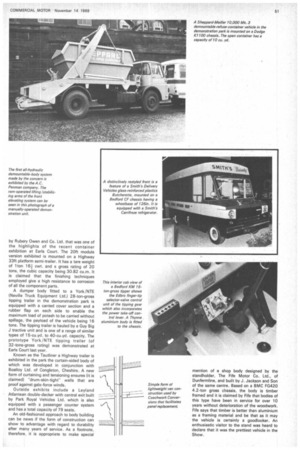 THE DEMAND for tippers in Scotland far exceeds the supply of suitable chassis. And the typical operator will currently accept any chassis with any body so long as it will move and tip. But Scottish operators want the best (at the lowest cost) and being keenly critical in an intelligent way are finding a lot to interest them technically in Kelvin Hall, even though the majority will have to wait quite a long time to get what they want.

Interest in tipper bodies over the past two or three years has centred on whether or not monocoque construction, or something like it, is the best form for fixed-sided tippers in terms of lightweight, low loading height and toughness. Monocoque construction is normally based on robust top rails that take most of the lifting load, and many variations are displayed at Kelvin Hall this year, including lightweight steel as well as aluminium bodies.

Although there are relatively few bodies built by Scottish concerns, the few that are on show include a number of exhibition highlights. Pioneers of the demountable body in pre-war days, A. C. Penman Ltd., of Dumfries, displays an entirely new swop-body system. And McLay's Garage Ltd., of Kirkintilloch, shows a highly attractive and functional 27-seat coach, designed and built by the company, that was completed just in time for the Show and is arousing a great deal of interest.

Walter Alexander and Co. (Coachbuilders) Ltd., of Falkirk, is not showing any new p.s.v. bodies this year, but Alexander exhibits perpetuate the company's reputation for building bodies that are comparable to the best produced in any country in the world.

In the main the tipper bodies come from across the Border; but an Alusuisse-designed aluminium tipper body of the monocoque type is shown (in addition to a conventional all-steel body) that was built by Douglas Munro and Co. Ltd., of Glasgow. And two lightweight tipper bodies of Corten steel are displayed that were produced by Eftee Metal Bodies Ltd., of Airdrie.

The Pennine 10 cu .yd. all-aluminium fixed-side tipper body shown on a Seddon 16-ton-gross chassis by the Seddon company is an interesting newcomer in that the form of monocoque construction employed may be regarded as a rather extreme example of an established trend. Providing a payload of over 11 tons the body is tipped by an Edbro 4LNS twin-ram gear.

Obviously providing great strength relative to the weight of aluminium used, the top and bottom rails are of such dimensions that comparatively little space is left between them, and the design must involve some sacrifice in payload space. Full-length longitudinal members are incorporated in the body but these are of light gauge material, are an integral part of the structure and give a large area of support to the floor. They taper to narrower base to match the width of the chassis longitudinals.

In common with the majority of monocoque and semi-monocoque bodies the Pennine body is argon-arc welded. From the appearance point of view it is a pity that it is not expedient to use continuous welding, which could cause distortion. As stated by a builder of a pressed-aluminium type of monocoque body, non-continuous welding looks patchy, which it is, and haphazard, which it is not.

In contrast to the Pennine and other lightweight bodies of aluminium and steel construction, the Alusuisse M Series monocoque aluminium body has no longitudinals apart from short body-support members. The Alusuisse M4 12 cu.yd. body, built by the Munro company, is mounted on an Albion Super Reiver 20-tons-gross six wheeled chassis, is tipped by an Edbro single-ram gear and provides for a payload of 13 tons. A special feature of Alusuisse construction is the use of extrusions in place of pressed sections, which is claimed to have a number of advantages including low-cost fabrication. A brake press is an expensive item of equipment.

Thynne Engineers Ltd., of Bolton, started producing aluminium bodies a relatively short time ago, having built all-steel bodies over a

long period. The two Thynne bodies at the Show suggest a "belt-and-bracesapproach

on the part of the designer, but undoubtedly the bodies are tough and payloads are good. Of welded construction, the bodies have box-section top rails and the main side-support box-section members are combined with cross-bearers in the normal way, but additional cross-bearers are fitted and a conventional type of steel channel-section lifting frame is used. In the case of a 9-cu.yd, body on a Bedford KM 16-ton-gross chassis, the payload is 10.7 tons, while a 15 cu.yd. body on a Foden eight-wheeled 24-ton-gross chassis provides a payload of 151 tons. An Edbro 4LNCS front-mounted single-ram gear is used to elevate the body of the smaller vehicle, the Foden-based body being tipped by outrigged F57 rams produced by the Edbro company to a Foden specification.

The Eftee bodies exhibited (of Corten steel) have one-piece sides which incorporate a box-section top rail with a tapered lower section, longitudinal ribs and a deep channel-section bottom rail, the lightweight longitudinals being integral with the main structure. A 6-cu.yd. body mounted on a Bedford TK chassis, plated at 11.65 tons, gives a payload of about 7; tons, while an 11-cu.yd. body on a Ford DT1400 six-wheeled tipper chassis (having big single tyres at the rear, can carry a payload of 13 tons 5cwt. The smaller vehicle is equipped with a Telehoist single-ram underbody gear, and the Ford-based body is elevated by an Edbro single front-of-body ram.

body system is available in manually operated, p.t.o.-operated and electrically powered form, the body on view being equipped with the p.t.o.-operated type. A single lift-up hydraulic ram is located at the rear of the body and at the front a singleor twin-ram gear is linked to two widespread arms that act as stabilizers as well as elevating members. The Show model is based on a BMC FG 900 chassis and the container body has a capacity of 950 cu.ft., the gross weight of the vehicle and payload being 9 tons and approximately 5 tons respectively. Employing the swop-body system in this case involves a weight penalty of about 6cwt, which is the, combined weight of the lifting gear, the swing-down legs and the sub-frame.

Based on a BMC FG550 chassis, the McLay's 27-seat coach was designed for hospitals and schools work, and is the first of

its type to be built by the company, which formerly concentrated on the production of workers' buses. Panoramic windows and full-depth /full-width glazing at the front and rear give the vehicle a distinctive appearance as well as a good view for the driver and passengers. Apart from ventilation offered by a roof ventilator at the front, the air can be conditioned by an electrically operated forced-draught system, while extra interior heating is available from a second Clayton Dewandre standard heater. The body is based on a light-alloy under-frame, the body framing is of top-hat steel sections and the roof is of composite steel /glass-fibre construction. Other details include nicotine-resistant

An interesting comparison may be made between a Walter Alexander 12m 42-seat motorway coach, based on a Bristol REMH rear engined chassis, and a Mercedes Benz 0.302 luxury touring coach which is equipped with a Panorama Elite body produced by Plaxtons (Scarborough) Ltd., of Scarborough. The motorway coach was built to the requirements of the Scottish Bus Group for the Edinburgh/Glasgow/London overnight express service, while the Mercedes/Plaxton coach will be employed by a Scottish operator for long-distance tours, including tours on the Continent.

Replacing the all-steel integral body of the standard Mercedes-Benz coach, the Plaxton body is of conventional composite construction, which operators are said to prefer to the integral type in some cases because they are familiar with repair procedures. Although it was necessary to fit outriggers to the chassis to accommodate the body and strengthen the structure, the Plaxton-bodied vehicle only weighs 1cwt more than the standard Mercedes-Benz coach. The Show vehicle is equipped with a fully-adjustable driver's seat, the bounce frequency of which is controllable, and a Mini-Hailer tape recorder. A recorder is considered preferable by the operator to a radio because the programme can be selected, the quality of reproduction is always good and if required a commentary on the local scene (by a professional commentator) can be put on for the benefit of the passengers at appropriate times.

At the 1967 Scottish Show a Walter Alexander 82-seat 33ft highbridge doubledecker body in Edinburgh Corporation livery was shown by the Leyland company on an Atlantean chassis. This year Leyland is exhibiting a similar vehicle with a central exit adapted to one-man operation; the vehicle is built to meet the Ministry of Transport grant requirements and is equipped with a periscope system lc,iving the driver a view of the top deck) as well as an electronic passenger counter operated by two of the steps on the upper-deck stairway. This was a feature of the 1967 double-decker.

One of a fleet ordered by Dundee Corporation Transport, a Daimler Fleetline single-deck chassis is exhibited by the Daimler company on which is mounted a Walter Alexander 36ft 46-seat body that is suitable for one-man operation. This is the first Fleetline single-decker to be supplied to Dundee and the order is part of a standardization programme to match the chassis specification of the single-deckers to that of the double-deckers in the fleet.

Of the containers at the Show the most notable is the RO-Tran all-steel unit produced by Rubery Owen and Co. Ltd. that was one of the highlights of the recent container exhibition at Earls Court. The 20ft module version exhibited is mounted on a Highway 33ft platform semi-trailer. It has a tare weight of 1ton 164 cwt. and a gross rating of 20 tons, the cubic capacity being 30.82 cu.m. It is claimed that the finishing techniques employed give a high resistance to corrosion of all the component parts.

A dumper body fitted to a York /NTE (Neville Truck Equipment Ltd.) 28-ton-gross tipping trailer in the demonstration park is equipped with a canted cover section and a rubber flap on each side to enable the maximum load of potash to be carried without spillage, the payload of the vehicle being 16 tons. The tipping trailer is hauled by a Guy Big J tractive unit and is one of a range of similar types of 15-cu.yd. to 40-cu.yd. capacity. The prototype York /NTE tipping trailer lof 32-tons-gross rating) was demonstrated at Earls Court last year.

Known as the Tautliner a Highway trailer is exhibited in the park the curtain-sided body of which was developed in conjunction with Boalloy Ltd. of Congleton, Cheshire. A new form of curtaining and tensioning ensures (it is claimed) -drum-skin-tight" walls that are proof against gale-force winds.

Outside exhibits include a Leyland Atlantean double-decker with central exit built by Park Royal Vehicles Ltd. which is also equipped with a passenger counter system and has a total capacity of 79 seats.

An old-fashioned approach to body building can be news if the form of construction can show to advantage with regard to durability after many years of service. As a footnote, therefore, it is appropriate to make special mention of a shop body designed by the standholder, The Fife Motor Co. Ltd., of Dunfermline, and built by J. Jackson and Son of the same centre. Based on a BMC FG420 4.2-ton gross chassis, the body is timber framed and it is claimed by Fife that bodies of this type have been in service for over 10 years without deterioration of the woodwork. Fife says that timber is better than aluminium as a framing material and he that as it may the vehicle is certainly a goodlooker. An enthusiastic visitor to the stand was heard to declare that it was the prettiest vehicle in the Show.