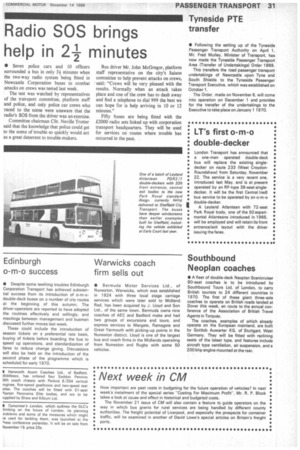 • London Transport has announced that • a one-man operated double-deck • bus will replace the existing single • decker on route 233 (West Croydon • Roundshaw) from Saturday. November • 22. The service is a very recent one, • • introduced last May, and is at present • operated by an RF-type 39-seat single • decker. It will be the first Central (red) • bus service to be operated by an o-m-o • double-decker.

A Leyland Atlantean with 72-seat • Park Royal body, one of the 50 experi• • mental Atlanteans introduced in 1965, • will be employed and will retain its front • entrance/exit layout with the driver • • issuing the fares.