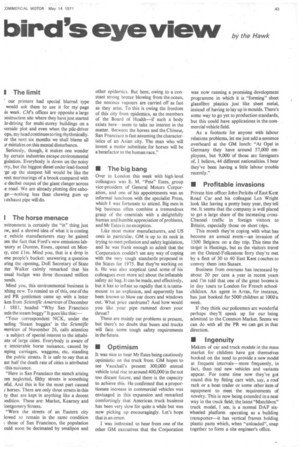 Page 45, 14th May 1971 — bird's eye view by the Hawk
Close
Noticed an error?
If you've noticed an error in this article please click here to report it so we can fix it.
Keywords : Car Manufacturers, General Motors, Opel, Ford Motor Company, San Francisco

our printers had special blurred type would ask them to use it for my page is week. CM's offices are opposite a large mstruction site where they have just started ile-driving for multi-storey buildings on a verside plot and even when the pile-driver ops, my head continues to ring rhythmically. or the next six months we shall blame all ir mistakes on this mental disturbance.

Seriously, though, it makes one wonder hy certain industries escape environmental gislation. Everybody is down on the noisy rry, but the biggest diesel under lead-footed .ge up the steepest hill would be like the veet murmurings of a brook compared with e decibel output of the giant danger across Le road. We are already plotting dire saboge—nothing less than chewing gum up 3 exhaust pipe will do.

I The horse menace

nvironment is certainly the "in" thing just )w, and a shrewd idea of what it is costing e vehicle manufacturers may be gained om the fact that Ford's new emissions lab-atory at Dunton, Essex, opened on Monty, cost £1m. Mind you, that is a drop in ime people's bucket: answering a question iring the opening, DoE Secretary of State ,Tter Walker calmly remarked that his mual budget was three thousand million Rinds.

Mind you, this environmental business is )thing new. To remind us of this, one of the ord PR gentlemen came up with a letter ken from Scientific American of December l 1881, headed "Why San Francisco mids the steam buggy" It goes like this:— "Your correspondent NCK, under the )ading 'Steam buggies' in the Scientific merican of November 26, calls attention a subject of special interest to the inhabints of large cities. Everybody is aware of e intolerable horse nuisance, caused by xping carriages, waggons, etc, standing the public streets. It is safe to say that at ast half the death rate of cities is attributed this nuisance.

"Here in San Francisco the stench arising om neglected, filthy streets is something w ful. And this is for the most part caused horses. There are only three streets in this ty that are kept in anything like a decent mdition. These are: Market, Kearney and (ontgomery Streets.

"Were the streets of an Eastern city lowed to remain in the same condition ; those of San Francisco, the population ould soon be decimated by smallpox and other epidemics. But here, owing to a constant strong breeze blowing from the ocean, the noxious vapours are carried off as fast as they arise. To this is owing the freedom of this city from epidemics, as the members of the Board of Health—if such a body exists here—seem to take no interest in the matter. Between the horses and the Chinese, San Francisco is fast assuming the characteristics of an Asian city. The man who will invent a motor substitute, for horses will be a benefactor to the human race."

Over in London this week with high-level colleagues was E. M. "Pete" Estes, group vice-president of General Motors Corporation, and one of his appointments was an informal luncheon with the specialist Press, which I was fortunate to attend. Big men in big business often combine a tremendous grasp of the essentials with a delightfully human and humble appreciation of problems, and Mr Estes is no exception.

Like most motor manufacturers, and US ones in particular, GM is up to its neck in trying to meet pollution and safety legislation, and he was frank enough to admit that the Corporation couldn't see any way of coping with the very tough standards proposed in the States for 1975, But they're working on it He was also sceptical (and some of his colleagues even more so) about the inflatable safety air bag. It can be made, and effectively, but it has to inflate so rapidly that it is tantamount to an explosion, and apparently has been known to blow car doors and windows out. What price eardrums? And how would you like your pipe rammed down your throat?

These are mainly car problems at present, but there's no doubt that buses and trucks will face some tough safety requirements in the future.

It was nice to hear Mr Estes being cautiously optimistic on the truck front. GM hopes to see Vauxhall's present 300,000 annual vehicle total rise to around 400,000 in the not too distant future, and there is the capacity to achieve this. He confirmed that a proportionate increase in commercial vehicles was envisaged in this expansion and remarked comfortingly that American truck business has been very slow for quite a while but was now picking up encouragingly. Let's hope that is an omen.

I was interested to hear from one of the other GM executives that the Corporation was now running a promising development programme in which it is "forming" sheet glassfibre plastics just like sheet metal, instead of having to lay up in moulds. There's some way to go yet to production standards, but this could have applications in the commercial vehicle field.

As a footnote for anyone with labour relations problems, let me just add a sentence overheard at the GM lunch: "At Opel in Germany they have around 57,000 employees, but 9,000 of those are foreigners of, I believe, 44 different nationalities. I hear they've been having a little labour trouble recently."

Private hire officer John Perkins of East Kent Road Car and his colleague Len Wright look like having a pretty busy year, they tell me. It seems that the company is well placed to get a large share of the increasing crossChannel traffic in foreign visitors to Britain, especially those on short trips.

This month they're coping with what has become an annual event—an invasion of 1500 Belgians on a day trip. This time the target is Hastings, but as the visitors travel on the Ostend-Folkestone ferry they're met by a fleet of 30 to 40 East Kent coaches to convey them into Sussex.

Business from overseas has increased by about 20 per cent a year in recent years and I'm told that one of the great booms is in day tours to London for French schoolchildren. An agent in Arras, for instance, has just booked for 5000 children at 1000 a week.

If they think our policemen are wonderful perhaps they'll speak up for our being admitted to the Common Market. Seems we can do with all the PR we can get in that direction.

Makers of car and truck models in the mass market for children have got themselves hooked on the need to provide a new model at frequent intervals—more frequently, in fact, than real new vehicles and variants appear. For some time now they've got round this by fitting cars with, say, a roof rack or a boat trailer or some other item of equipment to meet the requirements of novelty. This is now being extended in a neat way in the truck field; the latest "Matchbox" truck model, I see, is a normal DAF sixwheeled platform operating as a building transporter—it has vertical frames holding plastic parts which, when "unloaded", snap together to form a site engineer's office.