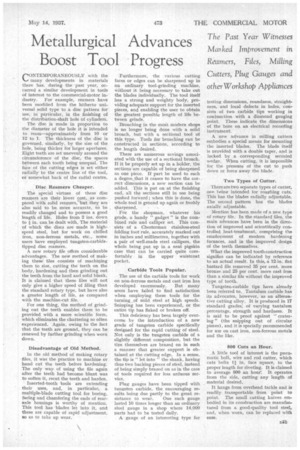 Page 41, 14th May 1937 — Metallurgical Advances Boost Tool Progress
Close
Noticed an error?
If you've noticed an error in this article please click here to report it so we can fix it.

many developments in materials there has, during the past year, occurred a similar development in tools of interest to the commercial-motor industry. For example, reamers have been modified from the hitherto universal solid type to a disc pattern for use, in particular, in the finishing of the distribution-shaft hole of cylinders.

The disc is made in proportion to the diameter of the hole it is intended to ream—approximately from 10 or 12 to 1. The thickness of the disc is governed, similarly, by the size of the hole, being thicker for larger apertures. Eight teeth are set unevenly around the circumference of the disc, the spaces between each tooth being unequal. The face of the cutting edges is set either radially to the centre line of the tool, or somewhat back of the radial centre.

The special virtues of these disc reamers are their lower cost,: as compared with solid reamers, but they are also said to be more accurate, to be readily changed and to possess a good length of life. Holes from 2 ins, down to / in. can be dealt with. The material of which the discs are made is highspeed steel, but for work on chilled iron, non-ferrous metals, etc., some users have employed tungsten-carbidztipped disc reamers.

A new rotary file offers considerable advantages. The new method of making these files consists of machining them to size, cutting the teeth on the body, hardening and then grinding out the teeth from the hard and solid blank. It is claimed that these files will not only give a higher speed of filing than the standard rotary type, but have also a greater length of life, as compared with the machine-cut file.

For one thing, the method of grinding out the teeth enables them to be provided with a more scientific form, which eliminates the chattering so often experienced. Again, owing to the fact that the teeth are ground, they can be renewed by further grinding when worn down.

In the old method of making rotary files, it was the practice to machine or hand cut the teeth before hardening. The only way of using the file again after the teeth had become blunt was to soften it, recut the teeth and harden.

Inserted-tooth fools are extending their uses, and, in particular, a multiple-blade cutting tool for boring, facing and chamfering the ends of rearrode housings is worthy of mention. This tool has blades let into it, and these are capable of rapid adjustment, so as to take up wear. Furthermore, the various cutting faces or edges can be sharpened up in an ordinary tool-grinding machine, Without it being necessary to take out the blades individually. The tool itself has a strong and weighty body, providing adequate support for the inserted pieces, and enabling the user to obtain the greatest possible length of life between grinds.

Broaching in the mo4 modern shops is no longer being done with a solid broach, but with a sectional tool of this type. Tools for broaching can be constructed in sections, according to the length desired.

There are numerous savings associated with the use of a sectional broach. If it be properly set up in a holder, the sections are capable of being sharpened as one piece. If part be used to such a degree...that it ceases to have the correct dimensions, a new section can be added. This is put on at the finishing end, all the sections still in use being pushed forward ; when this is done., the whole tool is ground up again or freshly sharpened.

. For the shopman, whatever his grade, a handy "gadget " is the combined rule and calliper set. This consists of a Chesterrnan stainless-steel folding foot rule, accurately marked out in inches and millimetres, together with a pair of welhtnade steel callipers, the whole being put up in a neat pigskin case that can be carried quite comfortably in the upper waistcoat pocket.

The use of the carbide tools for work on non-ferrous metals and cast iron has developed enormously. But many users have failed, to find satisfaction when employing these tools for the turning of mild steel at high speeds. Snipping has been experienced, or the entire tip has flaked or broken off.

This deficiency has been largely overcome by the introduction of a new grade of tungsten carbide specifically designed for the rapid cutting of steel. Not only is the tungsten carbide of a slightly different composition, but the tips themselves are brazed on in such a manner that greater support is obtained at the cutting edge. In a sense, the tip is " let into " the shank, having thus two backing pieces of steel, instead of being simply brazed on as in the case of tools required for less arduous service.

Plug gauges have been tipped with tungsten carbide, the encouraging results being due partly to the great re sistance to wear. One such gauge lasted 10 times longer than an ordinary steel gauge in a shop where 14,000 parts had to be tested daily.

A gauge of an interesting type for testing dimensions, roundness, straightness, and local defects in holes, consists of two carbide tips working in conjunction with a diamond gauging point. These indicate the dimensions of the bore on an electrical recording instrument.

A new advance in milling cutters embodies a special means for mounting the inserted blades. The blade itself is provided with a double taper, and is locked by a corresponding serrated wedge, When cutting, it is impossible for the pressure of the cut to push down or force away the blade.

Mention has been made of a new type of rotary file. In the standard files, the main advances have been in the direction of improved and scientifically controlled heat-treatment, comprising the employment of modern hardening furnaces, and in the improved design of the teeth themselves.

Tungsten-carbide tips have already been referred to. Tantalum carbide has its advocates, however, as an alternative cutting alloy. It is produced in 17 standard grades: of varying tantalum percentage, strength and hardness. It is said to be proof against " cratering " (the snipping out of circular pieces), and it is specially recommended for use on cast iron, non-ferrous metals and the like.

. A little tool of interest is the pneumatic bolt, wire and rod cutter, which cuts bolts lz in. face square, to the proper length for riveting. It is claimed to average SOO an hour' It operates from the side, cutting any length of material desired.

It hangs from overhead tackle and is readily transportable from point to point. The small cutting knives embodied in its construction are manufactured from a good-quality tool steel, and, when worn, can be replaced with ease.