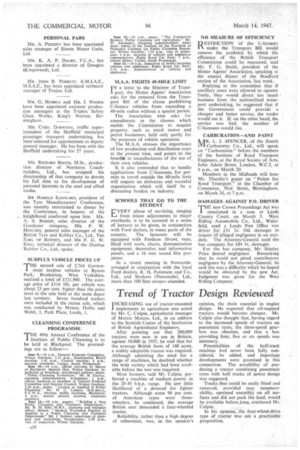 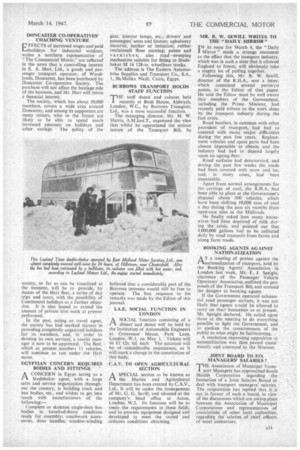 Page 32, 14th March 1947 — Trend of Tractor Dawn Revtewed
Close
Noticed an error?
If you've noticed an error in this article please click here to report it so we can fix it.
Keywords : Agricultural Machinery, Doncaster, Tractors

INCREASING use of tractor-mounted 1 implements in agriculture was noted by Mr. C. Culpin, agricultural manager of Morris Motors. Ltd., in an address to the Scottish Centre of the institution of British Agricultural Engineers.

After pointing out that 200,000 tractors were now in use in Britain, against 50,000 in 1935, he said that for the average British farm of 160 acres, a widely adaptable tractor was required. Although admitting the need for a range of machines, he doubted whether the wide variety which had been available before the war was required.

Most farmers. said Mr. Culpin, preferred a machine of medium power, in the 20-30 b.h.p. range. He saw little likelihood of a demand for lighter tractors. Although some 90 per cent. of American types were threewheelers, he continued, the average British user demanded a four-wheeled tractor.

Reliability, rather than a high degree of refinement, was, in the speaker's opinion, the main essential in engine design. He expected that oil-engined tractors would become cheaper. Mr. Culpin also thought that, having regard to the increased speeds of tractors on pneumatic tyres, the three-speed gearbox Was obsolete, and that a box providing four, five or six speeds was necessary.

Potentialities of the half-track machine had never been fully considered, he added, and important developments were promised in this connection. The possibility of producing a tractor combining pneumatic tyres with half tracks of newer design was suggested.

Tracks that could be easily fitted and removed, provided easy manoeuvrability, operated smoothly on all surfaces and did not pack the land, would be available before Jong, continued Mr. Culpin.

In his opinion, the four-wheel-drive type of tractor was not a practicable proposition. DONCASTER CO-OPERATIVES' COACHING VENTURE

EFFECTS of increased wages and paid holidays for industrial workers, writes a northern representative of " The Commercial Motor," are reflected' in the news that a controlling interest in E. A. Hart, Ltd., a goods and passenger transport operator, of Woodlands, Doncaster, has been-purchased by Doncaster Co-operative Society. The purchase will not affect the haulage side of the business, and Mr. Hart will retain a financial interest.

The society, which has about 50,000 members, covers a wide area around Doncaster, and among its supporters are many miners, who in the future are likely to be able to spend much increased amounts on holidays and other outings. The policy of the society, so far as can be visualized at the moment, will be to provide, by means of the Hart fleet, a series of day trips and tours, with the possibility of Continental holidays as a further objective. It is also hoped to extend the amount of private hire work at present performed.

In the past, acting AS travel agent, the society has had marked success in providing completely organized holidays for its members, and, in order to develop its own services; a tourist manager is now to be appointed. The fleet, which at present numbers 11 vehicles, will continue to run under the Hart name.

ACONCERN in Egypt acting as a Studebaker agent, with a large sales and service organization throughout the country, is building truck and bus bodies, etc., and wishes to get into touch with manufacturers of the following:—

The managing director, Mr. M. W. Harris, A.M.Inst.T., expressed the view that whilst he appreciated the serious nature of the Transport Bill, he believed that a considerable part of the Burrows interests would still be free to operate. The first response to his remarks was made by the Editor of this journal.

1-1 A SOCIAL function consisting of a dinner and dance will be held by the Institution of Automobile Engineers at. Grosvenor' House, Park Lane, London,W.1, on May 1. Tickets will be LI 12s1 6d. each:" The occasion will be of -considerable importance-, as it -will:mark a change in the constitution of this body.

r1A SPECIAL section to be known as the Marine and Agricultural Department has been created by C.A.V., Ltd., It will be under the management of Mr. G. G. Savill, and situated at the company's head office at Acton, London, W.3. Its function will be to study, the requirements in these fields, and to provide equipment designed and developed to meet the varied and arduous conditions obtaining.