MAN ON A CLEAN SH ET 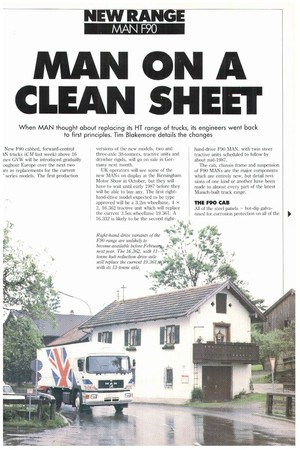 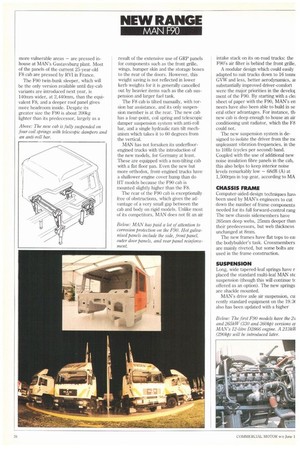 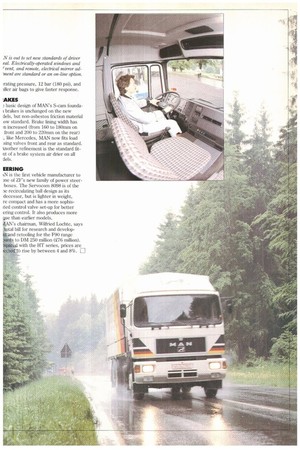 Page 33, 14th June 1986 — MAN ON A CLEAN SH ET
Close
Noticed an error?
If you've noticed an error in this article please click here to report it so we can fix it.
Keywords : Pickup Trucks, Truck, Suspension, Chevrolet C/k

When MAN thought about replacing its HT range of trucks, its engineers went back to first principles. Tim Blakemore details the changes

New F90 cabbed, forward-control kN trucks (CM last week) above 16 ines GVW will be introduced gradually oughout Europe over the next two irs as replacements for the current 'series models. The first production versions of the new models, two and three-axle 38-tonners, tractive units and drawbar rigids, will go on sale in Germany next month.

IJK operators will see some of the new MANs on display at the Birmingham Motor Show in October, but they will have to wait until early 1987 before they will be able to buy any. The first righthand-drive model expected to be type approved will be a 3.2m wheelbase, 4 x 2, 16.362 tractive unit which will replace the current 3.5m wheelbase 19.361. A 16.332 is likely to be the second right hand-drive F90 MAN. with twin steer tractive units scheduled to follow by about mid-1987.

The cab, chassis frame and suspension of F90 MANs are the major components which are entirely new, hut detail revisions of one kind or another have been made to almost every part of the latest Munich-built truck range.

THE F90 CAB All of the steel panels — hot-dip galvanised for corrosion protection on all of the more vulnerable areas — are pressed inhouse at MAN's Gustavsburg plant. Most of the panels of the current 25-year-old F8 cab are pressed by RVI in France.

The F90 twin-bunk sleeper, which will be the only version available until day-cab variants are introduced next year, is 140min wider, at 2,440mm, than the equivalent F8, and a deeper roof panel gives more headroom inside. Despite its greater size the F90 is about 200kg lighter than its predecessor, largely as a Above: The new cab is fully suspended on four coil springs with telescopic dampers and an anti-roll bar. result of the extensive use of GRP panels for components such as the front grille, wings, bumper skin and the storage boxes to the rear of the doors. However, this weight saving is not reflected in lower kerb weights for it is generally cancelled out by heavier items such as the cab suspension and larger fuel tank.

The F8 cab is tilted manually, with torsion bar assistance, and its only suspension member is at the rear. The new cab has a four-point, coil spring and telescopic damper suspension system with anti-roll bar, and a single hydraulic ram tilt mechanism which takes it to 60 degrees from the vertical.

MAN has not forsaken its underfloorengined trucks with the introduction of the new models, for Germany at least. These are equipped with a non-tilting cab with a flat floor pan. Even the new but more orthodox, front-enned trucks have a shallower engine cover hump than do HT models because the F90 cab is mounted slightly higher than the F8.

The rear of the F90 cab is exceptionally free of obstructions, which gives the advantage of a very small gap between the cab and body on rigid models. Unlike most of its competitors, MAN does not fit an air intake stack on its on-road trucks: the F90's air filter is behind the front grille.

A modular design which could easily adapted to suit trucks down to 16 tonru GVW and less, better aerodynamics, al substantially improved driver-comfort were the major priorities in the develo[ ment of the F90. By starting with a cle; sheet of paper with the F90, MAN's en neers have also been able to build in se eral other advantages. For instance, th new cab is deep enough to house an air conditioning unit radiator, which the F8 could not.

The new suspension system is designed to isolate the driver from the mt unpleasant vibration frequencies, in the to 10Hz (cycles per second) band. Coupled with the use of additional new noise insulation fibre panels in the cab, this also helps to keep interior noise levels remarkably low — 68dB (A) at 1,500rpm in top gear, according to MA CHASSIS FRAME Computer-aided-design techniques havi been used by MAN's engineers to cut down the number of frame components needed for its full forward-control rang The new chassis sidemembers have 265mm deep webs, 25mm deeper than their predecessors, but web thickness unchanged at 8mm.

The new frames have flat tops to ea: the bodybuilder's task. Crossmembers are mainly riveted, but some bolts are used in the frame construction.

SUSPENSION Long, wide tapered-leaf springs have r placed the standard multi-leaf MAN stE suspension (though this will continue tt offered as an option). The new springs are shackle mounted.

MAN's drive axle air suspension, cui rently standard equipment on the 19.3( also has been updated with a higher rating pressure, 12 bar (180 psi), and iller air bags to give faster response.

! basic design of MAN's S-cam foundabrakes is unchanged on the new dels, but non-asbestos friction material ow standard. Brake lining width has increased (from 160 to 180mm on front and 200 to 220nun on the rear) ., like Mercedes, MAN now fits load sing valves front and rear as standard. nother refinement is the standard fitnt of a brake system air drier on all EERING k.N is the first vehicle manufacturer to wie of ZF's new family of power steerboxes. The Servocom 8098 is of the le recirculating ball design as its (lecessor, but is lighter in weight, re compact and has a more sophisited control valve set-up for better ering control. It also produces more

's chairman, Wilfried Locke, says tal bill for research and developnd retooling for the F90 range to DM 250 million (E76 with the HT series, prices are )e rise by between 4 and 8%. 1:11