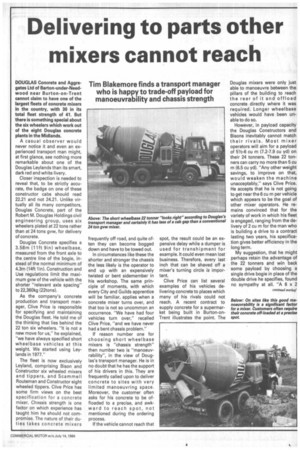 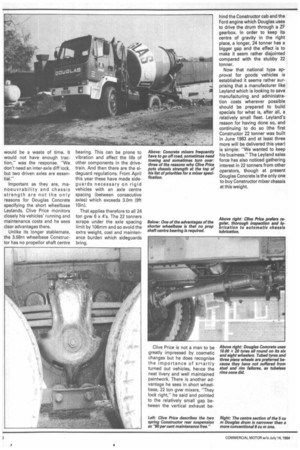 DOUGLAS Concrete and Aggregates Ltd of Barton-under-Needwood near Burton-on-Trent cannot claim to have one of the largest fleets of concrete mixers in the country, with 30 in its total fleet strength of 41. But there is something special about the six wheelers which work out of the eight Douglas concrete plants in the Midlands.

A casual observer would never notice it and even an experienced transport man might, at first glance, see nothing more remarkable about one of the Douglas Leylands than its smart, dark red and white livery.

Closer inspection is needed to reveal that, to be strictly accurate, the badge on one of these constructor cabs should read 22.21 and not 24.21. Unlike virtually all its many competitors, Douglas Concrete, part of the Robert M. Douglas Holdings civil engineering group, uses six wheelers plated at 22 tons rather than at 24 tons gvw, for delivery of concrete.

Douglas Concrete specifies a 3.58m (lift 9in) wheelbase, measured from the front axle to the centre line of the bogie, instead of the normal minimum of 4.3m (14ft 1n). Construction and Use regulations limit the maximum gvw of the vehicle with the shorter "relevant axle spacing" to 22,360kg (22tons).

As the company's concrete production and transport manager, Clive Price is responsible for specifying and maintaining the Douglas fleet. He told me of the thinking that lies behind the 22 ton six wheelers. "It is not a new move for us," he explained, "we have always specified short wheelbase vehicles at this weight. We started using Leylands in 1977," The fleet is now exclusively Leyland, comprising Bison and Constructor six wheeled mixers and tippers, and Scammell Routeman and Constructor eight wheeled tippers. Clive Price has some firm views on the best specification for a concrete mixer. Chassis strength is one factor on which experience has taught him he should not compromise. The nature of their duties takes concrete mixers frequently off road, and quite often they can become bogged down and have to be towed out.

In circumstances like these the shorter and stronger the chassis the less likely is the operator to end up with an expensively twisted or bent sidemember in his workshop. The same principle of moments, with which every City and Guilds apprentice will be familiar, applies when a concrete mixer turns over, and that too is not so uncommon an occurrence. "We have had four vehicles turn over," recalled Clive Price, "and we have never had a bent chassis problem."

If reason number one for choosing short wheelbase mixers is "chassis strength" then number two is "manoeuvrability", in the view of Douglas's transport manager. He is in no doubt that he has the support of his drivers in this. They are frequently called upon to deliver concrete to sites with very limited manoeuvring space. Moreover, the customer often asks for his concrete to be offloaded to a precise, and awkward to reach spot, not mentioned during the ordering process.

If the vehicle cannot reach that

spot, the result could be an expensive delay while a dumper is used for transhipment for example. It could even mean lost business. Therefore, every last inch that can be shaved off a mixer's turning circle is important.

Clive Price can list several examples of his vehicles delivering concrete to places which many of his rivals could not reach. A recent contract to supply concrete for a supermarket being built in Burton-onTrent illustrates the point. The Douglas mixers were only just able to manoeuvre between the pillars of the building to reach the rear of it and offload concrete directly where it was required. Longer wheelbase vehicles would have been unable to do so.

However, in payload capacity the Douglas Constructors and Bisons inevitably cannot match their rivals. Most mixer operators will aim for a payload of 51/2-6 cu m (7.2-7.9 cu yd) on their 24 tonners. These 22 tonners can carry no more than 5 cu m (6.5 cu yd). "Any other weight savings, to improve on that, would weaken the machine unacceptably," says Clive Price. He accepts that he is not going to get near the 6 cu m per vehicle which appears to be the goal of other mixer operators. He remains convinced that for the variety of work in which his fleet is engaged, ranging from the delivery of 2 cu m for the man who is building a drive to a contract lasting two years, his specification gives better efficiency in the long term.

My suggestion, that he might perhaps retain the advantage of the 22 tanners and win back some payload by choosing a single drive bogie in place of the double drive he specifies, found no sympathy at all. "A 6 x 2 would be a waste of time. It would not have enough traction," was the response. "We don't need an inter-axle diff lock, but two driven axles are essential."

Important as they are, manoeuvrability and chassis strength are not the only reasons for Douglas Concrete specifying the short wheelbase Leylands. Clive Price monitors closely his vehicles' running and maintenance costs and he sees clear advantages there.

Unlike its longer stablemate, the 3.58m wheelbase Constructor has no propellor shaft centre bearing. This can be prone to vibration and affect the life of other components in the drivetrain. And then there are the sideguard regulations. From April this year these have made sideguards necessary on rigid vehicles with an axle centre spacing (between consecutive axles) which exceeds 3.0m f9ft 10in).

That applies therefore to all 24 ton gvw 6 x 4's. The 22 tonners scrape under the axle spacing limit by 106mm and so avoid the extra weight, cost and maintenance burden which sideguards bring. Clive Price is not a roan to be greatly impressed by cosmetic changes but he does recognise the importance of smartly turned out vehicles, hence the neat livery and well maintained paintwork. There is another advantage he sees in short wheelbase, 22 ton gvw mixers. "They look right," he said and pointed to the relatively small gap between the vertical exhaust be hind the Constructor cab and the Ford engine which Douglas uses to drive the drum through a ZF gearbox. In order to keep its centre of gravity in the right place, a longer, 24 tanner has a bigger gap and the effect is to make it seem rather disjointed compared with the stubby 22 tanner.

Now that national type approval for goods vehicles is established it seems rather surprising that a manufacturer like Leyland which is looking to save manufacturing and administration costs wherever possible should be prepared to build specials for what is, after all, a relatively small fleet. Leyland's reason for having done so, and continuing to do so (the first Constructor 22 tonner was built in June 1983 and at least three more will be delivered this year) is simple: "We wanted to keep his business." The Leyland sales force has also noticed gathering interest in 22 tonners from other operators, though at present Douglas Concrete is the only one to buy Constructor mixer chassis at this weight.