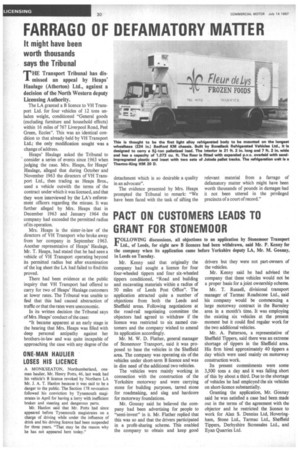 Page 32, 14th July 1967 — FARRAGO OF DEFAMATORY MATTER
Close
Noticed an error?
If you've noticed an error in this article please click here to report it so we can fix it.

It might have been worth thousands says the Tribunal

THE Transport Tribunal has dismissed an appeal by Heaps' Haulage (Atherton) Ltd., against a decision of the North Western deputy Licensing Authority.

The LA granted a B licence to VH Transport Ltd. for four vehicles of 12 tons unladen weight, conditioned "General goods (excluding furniture and household effects) within 16 miles of 767 Liverpool Road, Peel Green, Eccles". This was an identical condition to that already held by VH Transport Ltd.; the only modification sought was a change of address.

Heaps' Haulage asked the Tribunal to consider a series of events since 1963 when judging the case. Mrs. Heaps, for Heaps' Haulage, alleged that during October and November 1963 the directors of VH Transport Ltd., then trading as Heaps Bros., used a vehicle outwith the terms of the contract under which it was licensed, and that they were interviewed by the LA's enforcement officers regarding the misuse. It was further alleged by Mrs. Heaps that in December 1963 and January 1964 the company had exceeded the permitted radius of its operation.

Mrs. Heaps is the sister-in-law of the directors of VH Transport who broke away from her company in September 1963. Another representative of Heaps' Haulage, Mr. T. Heaps, had stated that he had seen a vehicle of VH Transport operating beyond its permitted radius but after examination of the log sheet the LA had failed to find this proved.

There had been evidence at the public inquiry that VH Transport had offered to carry for two of Heaps' Haulage customers at lower rates. The Tribunal was unable to find that this had caused abstraction of traffic or that the rates were uneconomic.

In its written decision the Tribunal says of Mrs. Heaps' conduct of the case: "It became apparent at an early stage in the hearing that Mrs. Heaps was filled with deep personal antipathy against her brothers-in-law and was quite incapable of approaching the case with any degree of the