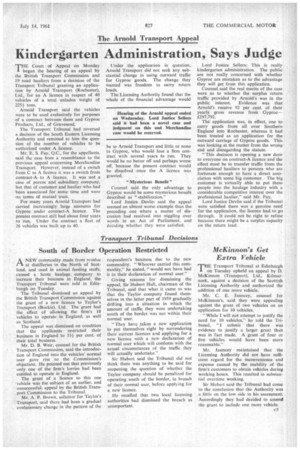 Page 45, 14th July 1961 — McKinnon's Get Extra Vehicle
Close
Noticed an error?
If you've noticed an error in this article please click here to report it so we can fix it.
Keywords : Transport, Vehicle, Law / Crime, Business / Finance

rinETransport Tribunal at Edinburgh n Tuesday upheld an appeal by D. McKinnon (Transport), Ltd., Kilmarnodc, against a decision of the Scottish Licensing Authority and authorized the addition of one more vehicle.

Mr. C. E. Jauncey, counsel for McKinnon's, •said they were appealing against the grant of two vehicles on an application for 10 vehicles.

"While I will not attempt to justify the need for 10 vehicles," he told the Tribunal, "I submit that there was evidence to justify a larger grant than was in fact made. A grant of four or five vehicles would have been more reasonable."

Mr. Jauncey maintained that the Licensing Authority did not have sufficient regard for the inconvenience and expense caused by the inability of the firm's customers to obtain vehicles during working hours. This resulted in substantial overtime working.

Sir Hubert said the Tribunal had come to the conclusion that the Authority was a little on the low side in his assessment. Accordingly they had decided to amend the grant to include one more vehicle.