The dark horse that could gee-up Seddon 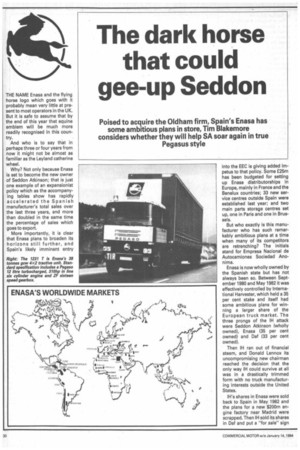 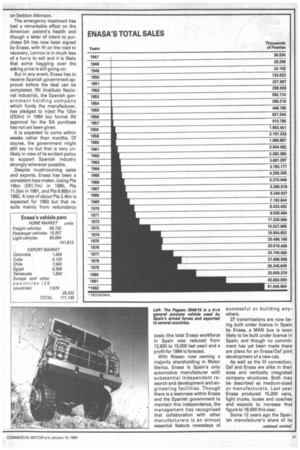 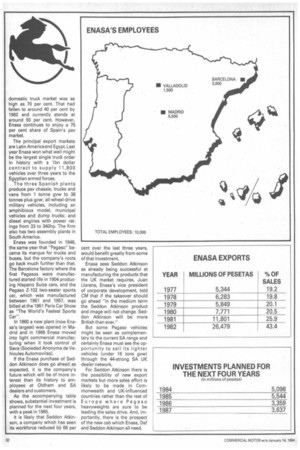 Poised to acquire the Oldham firm, Spain's Enasa has some ambitious plans in store, Tim Blakemore considers whether they will help SA soar again in true Pegasus style

THE NAME Enasa and the flying horse logo which goes with it probably mean very little at present to most operators in the UK. But it is safe to assume that by the end of this year that equine emblem will be much more readily recognised in this country.

And who is to say that in perhaps three or four years from now it might not be almost as familiar as the Leyland catherine wheel.

Why? Not only because Enasa is set to become the new owner of Seddon Atkinson; that is just one example of an expansionist policy which as the accompanying tables show has rapidly accelerated the Spanish manufacturer's total sales over the last three years, and more than doubled in the same time the percentage of sales which goes to export.

More importantly, it is clear that Enasa plans to broaden its horizons still further, and Spain's likely imminent entry into the EEC is giving added impetus to that policy. Some £25m has been budgeted for setting up Enasa distributorships in Europe, mainly in France and the Benelux countries; 33 new service centres outside Spain were established last year; and two main parts storage centres set up, one in Paris and one in Brussels.

But who exactly is this manufacturer who has such remarkably ambitious plans at a time when many of its competitors are retrenching? The initials stand for Empresa Nacional de Autocamiones Sociedad Anonima.

Enasa is now wholly owned by the Spanish state but has not always been so. Between September 1980 and May 1982 it was effectively controlled by International Harvester, which held a 35 per cent stake and itself had some ambitious plans for winning a larger share of the European truck market. The three prongs of the IH attack were Seddon Atkinson (wholly owned), Enasa (35 per cent owned) and Daf (33 per cent owned).

Then IH ran out of financial steam, and Donald Lennox its uncompromising new chairman reached the decision that the only way IH could survive at all was in a drastically trimmed form with no truck manufacturing interests outside the United States.

IH's shares in Enasa were sold back to Spain in May 1982 and the plans for a new $200m engine factory near Madrid were scrapped. Then IH sold its shares in Oaf and put a "for sale" sign on Seddon Atkinson.

The emergency treatment has had a remarkable effect on the American patient's health and though a letter of intent to purchase SA has now been signed by Enasa, with HA on the road to recovery. Lennox is in much less of a hurry to sell and it is likely that some haggling over the asking price is still going on.

But in any event, Enasa has to receive Spanish government approval before the deal can be completed. NI (Institut° Nacional Industrie), the Spanish government holding company which funds the manufacturer, has pledged to inject Pta 12bn (£53m) in 1984 but formal INI approval for the SA purchase has not yet been given.

It is expected to come within weeks rather than months. Of course, the government might still say no but that is very unlikely in view of its evident policy to support Spanish industry strongly wherever possible.

With Nissan now owning a majority shareholding in Motor lberica, Enasa is Spain's only automotive manufacturer with substantial independent research and development and eng ineering facilities. Though there is a keenness within Enasa and the Spanish government to maintain this independence, the management has recognised that collaboration with other manufacturers is an almost essential feature nowadays of successful cv building anywhere.

As well as the IH connection, Dal and Enasa are alike in their sizes and vertically integrated company structures. Both may be described as medium-sized cv manufacturers. Last year Enasa produced 15,000 vans, light trucks, buses and coaches and expects to increase that figure to 18,000 this year.

Some 12 years ago the Spanish manufacturer's share of its domestic truck market was as high as 70 per cent. That had fallen to around 40 per cent by 1982 and currently stands at around 55 per cent. However, Enasa continues to enjoy a 75 per cent share of Spain's psv market.

The principal export markets are Latin America and Egypt. Last year Enasa won what well might be the largest single truck order in history with a 1bn dollar contract to supply 11,800 vehicles over three years to the Egyptian armed forces.

The three Spanish plants produce psv chassis; trucks and vans from 1 tonne gvw to 38 tonnes plus gcw; all-wheel-drive military vehicles, including an amphibious model, municipal vehicles and dump trucks; and diesel engines with power ratings from 33 to 340hp. The firm also has two assembly plants in South America.

Enasa was founded in 1946, the same year that "Pegaso" became its marque for trucks and buses, but the company's roots go back much further than that. The Barcelona factory where the first Pegasos were manufactured started life in 1904 producing Hispano Suiza cars, and the Pegaso Z-102 two-seater sports car, which was manufactured between 1951 and 1957, was billed at the 1951 Paris Car Show as "The World's Fastest Sports Car".

In 1960 a new plant (now Enasa's largest) was opened in Madrid and in 1966 Enasa moved into light commercial manufacturing when it took control of Sava (Sociedad Anonyma de Vehicules Automovilas).

If the Enasa purchase of Seddon Atkinson does go ahead as expected, it is the company's future which will be of more interest than its history to employees at Oldham and SA dealers and customers.

As the accompanying table shows, substantial investment is planned for the next four years, with a peak in 1985.

It is likely that Seddon Atkinson, a company which has seen its workforce reduced 13‘',/ 66 per cent over the last three years, would benefit greatly from some of that investment.

Enasa sees Seddon Atkinson as already being successful at manufacturing the products that the UK market requires, Juan Llorens, Enasa's vice president of corporate development, told CM that if the takeover should go ahead "in the medium term the Seddon Atkinson product and image will not change. Seddon Atkinson will be more British than ever."

But some Pegaso vehicles might be seen as complementary to the current SA range and certainly Enasa must see the opportunity to sell its lighter vehicles (under 16 tons gvw) through the 44-strong SA UK dealer network.

For Seddon Atkinson there is the possibility of new export markets but more sales effort is likely to be made in Commonwealth and UK-influenced countries rather than the rest of Europe where Pegaso heavyweights are sure to be leading the sales drive. And, importantly, there is the prospect of the new cab which Enasa, Daf and Seddon Atkinson all need.