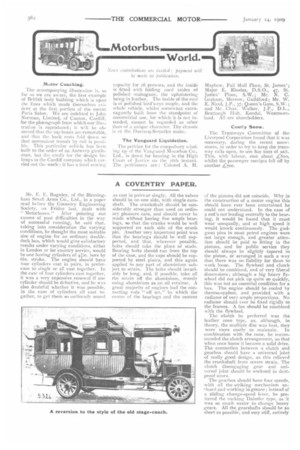 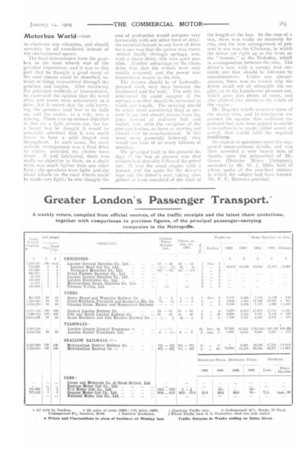 Page 6, 14th January 1909 — A COVENTRY PAPER.
Close
Noticed an error?
If you've noticed an error in this article please click here to report it so we can fix it.
Keywords : Daimler Motoren Gesellschaft, Mercedes 35 Hp, Clutch Control

Mr. E. E. Baguley, of the Birmingham Small Arms Co., Ltd., in a paper read before the Coventry Engineering Society, on Friday last, dealt with " Motorbuses." After pointing out causes of past difficulties in the way of successful running, he said that, taking into consideration the varying conditions, he thought the most suitable size of engine for an ordinary doubledeck bus, which would give satisfactory results under varying conditions, either in London or for country service, would be one having cylinders of 4.11n. bore by 6in. stroke. The engine should have four cylinders cast in pairs, in preference to single or all cast together. In the case of four cylinders cast together, it was a very expensive renewal if one cylinder should be defective, and he was also doubtful whether it was possible, in the case of cylinders all cast together, to get them so uniformly sound as cast in pairs or singly. All the valves should be on one side, with single camshaft. The crankshaft should be considerably stronger than used on ordinary pleasure cars, and should never be made without having five ample bearings, so that the cranks would be well supported on each side of the crank pin. Another very important point was that the bearings should be well supported, and that, wherever possible, bolts should take the place of studs. Bearing bolts should run from the top of the case, and the caps should be supported by steel plates, and this again applied to any part of aluminium subject to strain. The bolts should invariably be long, and, if possible, take all the strain off the aluminium, merely using aluminium as an oil retainer. A great majority of engines had the connecting rods "off set," by which the centre of the bearings and the centres

of the pistons did not coincide. Why it, the construction of a motor engine this should have ever been entertained he could not understand. In the case of a rod's not leading centrally to the bearing, it would be found that it must wear unequally, and at high speed it would knock continuously. The gudgeon pins in most petrol engines were not large enough, and greater attention should be paid to fitting in the pistons, and for public service they should always be slightly tapered in the piston, or arranged in such a way that there was no liability for them to work loose. The flywheel and clutch should be combined, and of very liberal dimensions ; although a big heavy flywheel did not pick up quite so quickly, this was not an essential condition for a bus. The engine should be cooled by therrno-syphon, and provided with a radiator of very ample proportions. No radiator should ever be fixed rigidly to the frames. A fan should be combined with the flywheel.

The clutch he preferred was the leather cone type, as, , although, in theory, the multiple disc was best, they were more costly to maintain. In combination with the cone, he recommended the clutch arrangement, so that when once home it became a solid drive. The connection between a clutch and gearbox should have a universal joint of really good design, as this relieved the crankshaft from severe strain. The clutch disengaging gear and universal joint should be enclosed in dustproof cases.

The gearbox should have four speeds, with all the 'striking mechanism enelosed and working in grease instead of a sliding change-speed lever, he preferred the racking Daimler type, as it was so much easier to change heavy gears, kll the gearshafts should be as short as possible, and very stiff, entirely

to eliminate any vibration, and should certainly be all castellated instead of the old-fashioned square.

The linal transmission from the gearbox to the road wheels was of the greatest importance, and it was in this part that he thought a good many of the road shocks could be absorbed, instead of being transmitted through the gearbox and engine. After reviewing the principal methods of transmission, he expressed the opinion that the bevel drive and worm were satisfactory as a drive, bat it meant that the axle carrying the greatest load had to be built up, and the centre, as a rule, was a casting. There was no serious objection to this for a light private car, but for a heavy bus he thought it would be generally admitted that it was much butOr to have a solid forged axle throughout. In such cases, the inest suitable. arrangement was a final drive by chains, provided the chains were eased. If well lubricated, there was really no objection to them, as a chain drive was much lighter than any other form; the sprockets were light, and the chain wheels on the road wheels could be made very light ; he also thought the

cost of production would compare very favourably with any other form of drive. An essential feature in any form of drive for a bus was that the power was transmitted finally through springs, and, with a chain drive, this was quite possible. Another advantage of the chain drive iv ms that the wheels were very readily removed, and the power was transmitted nearer to the rim.

The frames should be of hydraulicpressed steel, very deep between the dashboard and the body. The only improvement he could suggest in the springs was they should be increased in width nod length. The steering should he much more substantial than at present in use and should always have big jaws iasiend of ordinary hall and socket, and, with the exception of the pins and bushes, no lever or steoring rod should t,ver be case-hardened. If this were more generally followed, they would not hear of so many failures of steering.

The principal fault in the general design of the bus at present was that makers had slavishly followed the petrol car. It was the usual engine with a bonnet, and the space for the driver's legs and the driver's seat, taking altogether at least one-third of the total of

the length of the bus. In the case of a bus, there was really no necessity for this, and the best arrangement at present in use was the Clarkson, in which the driver sat right up to the front on the bonnet," or the Wolseley, which is a compromise between the two. The driver's seat with a canopy was certainly one that should be followed by manufacturers. Coder any circumstances, there was no reason why the driver could not sit alongside his engine IS in the Lanchester pleasure car, which gave him plenty ot room, and also allowed free access to the whole of the engine.

Mr. Baguley briefly reviewed some of the steam cars, and in conclusion expressed the opinion that sailicient experience had now been gained to enable motorbus Io be made, either steam or petrol, that would fullil the required conditions.

l le replied to questions upon his suggested constructional details, and was then accorded a very hearty vote of thanks upon the proposition of Mr. Green (Daimler Motor Company), seconded by Mr. W. J. Mills, both of whom spoke of the excellent manner in which the subject had been treated. N1r. F. E, Barrows presided.