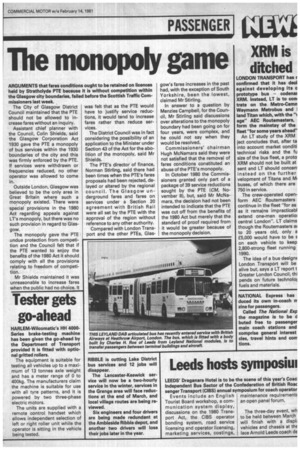 Page 25, 14th February 1981 — XRM is ditched
Close
Noticed an error?
If you've noticed an error in this article please click here to report it so we can fix it.

LONDON TRANSPORT has r confirmed that it has deci against developing its o prototype bus — codenar XRM. Instead, LT is to coni trate on the Metro-Camn Weymann Metrobus and I land Titan which, with the "r age" AEC Routemasters, form the mainstay of the fleet "for some years ahead" An LT study of the XRM ject concludes that, after ta into account market conditi technical risks and the fu size of the bus fleet, a proto XRM should not be built at sent and LT should conceni instead on the further velopment of Titans and MI buses, of which there are 750 in service.

The crew-operated openform AEC Routemasters continue in the fleet "for as as it remains impracticabl extend one-man operatior central London". LT claims though the Routemasters at to 20 years old, only a £5,000 would have to be s on each vehicle to keep 2,800-strong fleet running 1990.

The idea of a bus designs London Transport will be alive but, says a LT report t Greater London Council, thi pends on future technolcq fuels and materials.