OFF-THE-PEG OR TO ORDER? 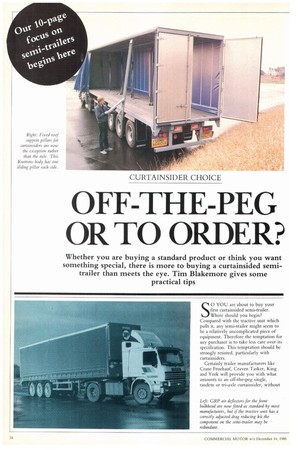 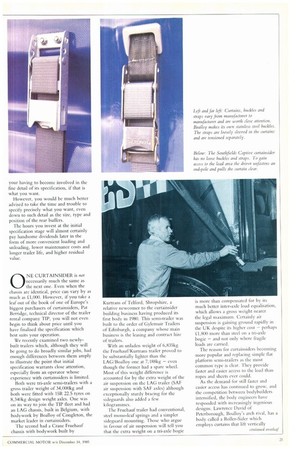 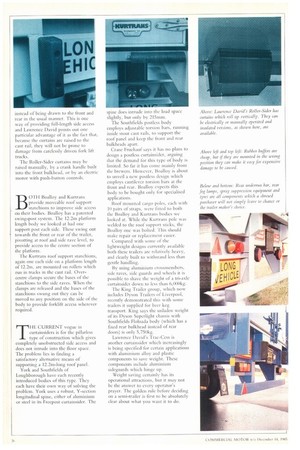 Page 26, 14th December 1985 — OFF-THE-PEG OR TO ORDER?
Close
Noticed an error?
If you've noticed an error in this article please click here to report it so we can fix it.
Keywords : Articulated Vehicles, Semi-trailer, Trailer, Fruehauf Corporation, Axle, Truck

Whether you are buying a standard product or think you want something special, there is more to buying a curtainsided semitrailer than meets the eye. Tim Blakemore gives some practical tips S0 YOU are about to buy your first curtainsided semi-trailer. Where should you begin? Compared with the tractive unit which pulls it, any semi-trailer might seem to be a relatively uncomplicated piece of equipment. Therefore the temptation for any purchaser is to take less care over its specification. This temptation should be strongly resisted, particularly with curtainsiders.

Certainly trailer manufacturers like Crane Fruehauf, Craven Tasker, King and York will provide you with what amounts to an off-the-peg single, tandem or tri-axle curtainsider, without your having to become involved in the fine detail of its specification, if that is what you want.

However, you would be much better advised to take the time and trouble to specify precisely what you want, even down to such detail as the size, type and position of the rear buffers.

The hours you invest at the initial specification stage will almost certainly pay handsome dividends later in the form of more convenient loading and unloading, lower maintenance costs and longer trailer life, and higher residual value.

0 NE CURTAINSIDER is not necessarily much the same as the next one. Even when the chassis are identical, price can vary by as much as £1,000. However, if you take a leaf out of the book of one of Europe's biggest purchasers of curtainsiders, Pat Berridge, technical director of the trailer rental company TIP, you will not even begin to think about price until you have finalised the specification which best suits your operation.

We recently examined two newlybuilt trailers which, although they will be going to do broadly similar jobs, had enough differences between them amply to illustrate the point that initial specification warrants close attention, especially from an operator whose experience with curtainsiders is limited.

Both were tri-axle semi-trailers with a gross trailer weight of 34,000kg and both were fitted with 15R 22.5 tyres on 8,340kg design weight axles. One was on its way to join the TIP fleet and had an LAG chassis, built in Belgium, with bodywork by Boalloy of Congleton, the market leader in curtainsiders.

The second had a Crane Fruehauf chassis with bodywork built by Kurtrans of Telford, Shropshire, a relative newcomer to the curtainsider building business having produced its first body in 1980. This semi-trailer was built to the order of Gylemuir Trailers of Edinburgh, a company whose main business is the leasing and contract hire of trailers.

With an unladen weight of 6,835kg the Fruehauf/Kurtrans trailer proved to be substantially lighter than the LAG/Boalloy one at 7,188kg — even though the former had a spare wheel. Most of this weight difference is accounted for by the extra weight of the air suspension on the LAG trailer (SAF air suspension with SAF axles) although exceptionally sturdy bracing for the sideguards also added a few kilogrammes.

The Fruehauf trailer had conventional, steel mono-leaf springs and a simpler sideguard mounting. Those who argue in favour of air suspension will tell you that the extra weight on a tri-axle bogie

is more than compensated for by its much better inter-axle load equalisation, which allows a gross weight nearer the legal maximum. Certainly air suspension is gaining ground rapidly in the UK despite its higher cost — perhaps C1,800 more than steel on a tri-axle bogie — and not only where fragile loads are carried.

The reason for curtainsiders becoming more popular and replacing simple flat platform semi-trailers as the most common type is clear. They provide faster and easier access to the load than ropes and sheets ever could.

As the demand for still faster and easier access has continued to grow, and the competition between bodybuilders intensified, the body engineers have responded with increasingly ingenious designs. Lawrence David of Peterborough, Boalloy's arch rival, has a body called a Roller-Sider which employs curtains that lift vertically instead of being drawn to the front and rear in the usual manner. This is one way of providing full-length side access and Lawrence David points out one particular advantage of it as the fact that, because the curtains are raised to the cant rail, they will not be prone to damage from carelessly driven fork lift trucks.

The Roller-Sider curtains may be raised manually, by a crank handle built into the front bulkhead, or by an electric motor with push-button controls.

B0111 Boalloy and Kurtrans provide moveable roof support stanchions to improve side access on their bodies. Boalloy has a patented swing-post system. The 12.2m platform length body we looked at had one support post each side. These swing out towards the front or rear of the trailer, pivotting at roof and side rave level, to provide access to the centre section of the platform.

TI1B CURRENT vogue in curtainsiders is for the pillarless type of construction which gives completely unobstructed side access and does not intrude into the floor space. The problem lies in finding a satisfactory alternative means of supporting a 12.2m-long roof panel.

York and Southfields of Loughborough have each recently introduced bodies of this type. They each have their own way of solving the problem. York uses a robust, Y-section longitudinal spine, either of aluminium or steel in its Freepost curtainsider. The spine does intrude into the load space slightly, but only by 215mm.

Crane Fruehauf says it has no plans to design a postless curtainsider, arguing that the demand for this type of body is limited. So far it has come mainly from the brewers. However, Boalloy is about to unveil a new postless design which employs cantilever torsion bars at the front and rear. Boalloy expects this body to be bought only for specialised applications.

Roof mounted cargo poles, each with In pairs of straps, were fitted to both the Boalloy and Kurtrans bodies we looked at. While the Kurtrans pole was welded to the roof support sticks, the Boalloy one was bolted. This should make repair or replacement easier.

Compared with some of the lightweight designs currently available both these trailers are relatively heavy, and clearly built to withstand less than gentle handling.

By using aluminium crossmembers, side raves, side guards and wheels it is possible to shave the weight of a tri-axle curtainsider down to less than 6,000kg.

The King Trailer group, which now includes Dyson Trailers of Liverpool, recently demonstrated this with some trailers it supplied for beer keg transport. King says the unladen weight of its Dyson Superlight chassis with South fields Fioloada body (which has a fixed rear bulkhead instead of rear doors) is only 5,750kg.

Lawrence David's Trac-Cess is another curtainsider which increasingly is being specified for certain applications with aluminium alloy and plastic components to save weight. These components include aluminium sideguards which hinge up.

Weight saving certainly has its . operational attractions, but it may not be the answer to every operator's prayer. The golden rule before deciding on a semi-trailer is first to be absolutely clear about what you want it to do.