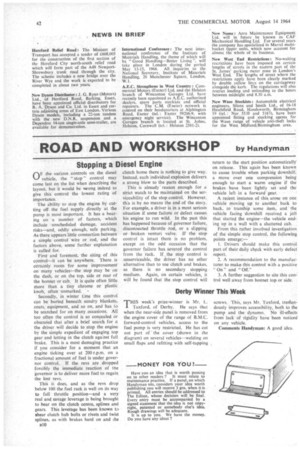 Page 44, 14th August 1964 — Derby Winne r This Week
Close
Noticed an error?
If you've noticed an error in this article please click here to report it so we can fix it.
Keywords : Geography Of England, Counties Of England, Local Government In England, Bassetlaw, Tuxford, Pump, Screw, Derby

THIS week's prize-winner is Mr. L 1 Tuxford. of Derby. He says that when the near-side panel is removed from the engine cover of the range of B.M.C. forward-control vehicles, access to the fuel pump is very restricted. He has cut out part of the cover (shown in the diagram) on several vehicles—welding on small flaps and refitting with self-tapping screws. This, says Mr. Tuxford, trernendously improves accessibility, both to the pump and the dynamo. No ill-effects from lack of rigidity have been noticed on any vehicle.