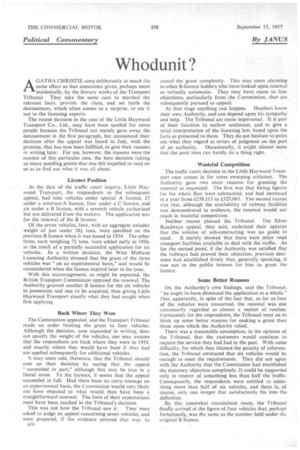 Page 50, 13th September 1957 — Whodunit?
Close
Noticed an error?
If you've noticed an error in this article please click here to report it so we can fix it.

AGATHA CHRISTIE aims deliberately at much the same effect as that sometimes given, perhaps more incidentally, by the literary works of the Transport Tribunal. They take the same care to marshal the relevant facts, provide the clues, and set forth the denouement, which often comes as a surprise, to me if not to the licensing experts.

The recent decision in the case of the Little Haywood Transport Co., Ltd., may have been spoiled for some people because the Tribunal not merely gave away the denouement in the first paragraph, but announced their decision after the appeal was heard in July, with the promise, that has now been fulfilled, to give their reasons in writing later. For me, however, the reasons were the essence of this particular case, the bare decision raising so many puzzling points that one felt impelled to read on so as to find out what it was all about.

Licence Position • At the date of the traffic court inquiry, Little Haywood Transport, the respondents to the subsequent appeal, had nine vehicles under special A licence, 27 under a contract-A licence, four under a C licence, and six under a B licence, with a seventh vehicle authorized but not delivered from the makers. The application was for the renewal of the B licence:

Of the seven vehicles, four, with an aggregate unladen weight of just under 28,1 tons, were specified on the previous B licence when it was issued in 1954. The other three, each weighing 71 tons, were added early in 1956, as the result of a partially successful application for six vehicles. In a written decision, the West Midland Licensing Authority stressed that the grant of the three vehicles was "on an experimental basis," and would be reconsidered when the licence expired later in the year.

With this encouragement, as might be expected, the British Transport Commission opposed the renewal. The Authority granted another B licence for the six vehicles in possession and one to be acquired, thus giving Little Haywood Transport exactly what they had sought when first applying.

Back Where They Were The Commission appealed, and the Transport Tribunal made an order limiting the grant to four vehicles. Although the decision, now •expanded in writing, does not specify the weight of the vehicles, one may assume that the respondents are back where they were in 1954, and exactly where they would have been if they had not applied subsequently for additional vehicles.

It may seem odd, therefore, that the Tribunal should sum up their decision by saying that the appeal " succeeded in part," although this may be true in a literal sense. To the layman, it seems that the appeal succeeded in full. Had there been no extra tonnage on an experimental basis, the Commission would very likely not have objected to what would then have been a straightforward renewal. The limit of their expectations must have been reached in the Tribunal's decision.

This was not how the Tribunal saw it. They were asked to judge an appeal concerning seven vehicles, and were prepared, if the evidence pointed that way, to n16 cancel the grant completely. This may seem alarming to other B-licence holders who have looked upon renewal as virtually automatic. They may have cause to fear objections, particularly from the Commission, that are subsequently pursued to appeal.

At that stage anything can happen. Hauliers know their own Authority, and can depend upon his sympathy and help. The Tribunal are more impersonal. It is part a their function to eschew sentiment, and to give a strict interpretation of the licensing law, based upon the facts as presented to them. They do not hesitate to point out what they regard as errors of judgment on the part

of an authority. Occasionally, it might almost seem that the poor man can hardly do a thing right.

The traffic court decision in the Little Haywood Transport case comes in for some sweeping criticism. The Authority gave two main reasons for granting the renewal as requested. The first was that hiring figures for the whole fleet were substantial, and had increased in a year from £238,113 to £325,083. The second reason was that, although the availability of railway facilities was demonstrated in evidence, the renewal would not result in wasteful competition.

Neither reason pleased the Tribunal. The Silver Roadways appeal, they said, enshrined their opinion that the volume of sub-contracting was no guide to need. It merely showed that there were other road transport facilities available to deal with the traffic. As for the second point, if the Authority was satisfied that the railways had proved their objection, previous decisions had established firmly that, generally speaking, it was not in the public interest for him to grant the licence.

Some Better Reasons On the Authority's own findings, said the Tribunal, " he ought to have dismissed the application as a whole." This, apparently, in spite of the fact that, as far as four of the vehicles were concerned, the renewal was one customarily regarded as almost a matter of routine. Fortunately for the respondents, the Tribunal went on to think up some better reasons for making a grant than those upon which the Authority relied.

There was a reasonable assumption, in the opinion of the Tribunal, that the customers would continue to require the service they had had in the past. With some difficulty, for which they blamed the paucity of information, the Tribunal estimated that six vehicles would be enough to meet the requirements. They did not agree with the Authority that the Commission had established the statutory objection completely. It could be supported only in respect of something less than half the traffic. Consequently, the respondents were entitled to something more than half of six vehicles, and there is, of course, only one integer that satisfactorily fits into the definition.

By this somewhat roundabout route, the Tribunal finally arrived at the figure of four vehicles that, perhaps fortuitously, was the same as the number held under the original B licence.