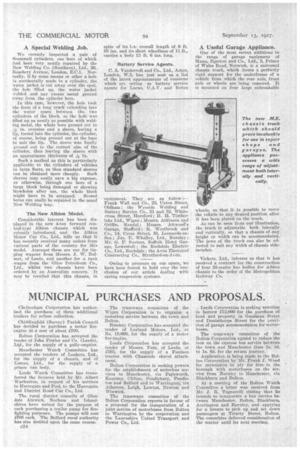 Page 46, 13th September 1927 — MUNICIPAL PURCHASES AND PROPOSALS.
Close
Noticed an error?
If you've noticed an error in this article please click here to report it so we can fix it.
Keywords : Bolton, Lancashire United, Leigh, Greater Manchester, Business / Finance

Cheltenham Corporation has authorized the purchase of three additional trailers for refuse collection.

ChiddingfoId (Surrey) Parish Council has decided to purchase a motor fireengine at a cost of about £700.

Bolton Corporation has. accepted the tender of John Fowler kind Co. (Leeds), L41., for the supply of a gully-emptier.

Leeds Watch Committee has transferred the lieencee held by Mr. Albert Warburton, in respect of his services to Harrogate and Pool, to the Harrogate and District Road Car Co., Ltd.

The rural district council.% of Glendale Alnwick, Norham and Islandshires have united for the purpose of each purchasing a trailer pump for firefighting purposes. The pumps will cost 1705 each. The Belford rural_ authority has also decided upon the same course.

The tramways committee of the Wigan Corporation is to organize a motorbus service between the town and Bolton.

Bombay Corporation has accepted the tender of Leylaud Motors, Ltd., at Rs. 18,660, for the supply of a motor fire-engine.

Leeds Corporation has accepted the tender of Messrs. Tate, of Leeds, at £393, for the supplY of a Fardson tractor with Chaseside -shovel attachment, Bolton Corporation is seeking powers for the establishment of motorbus services to Manchester, via Earnworth, Kearsley, Clifton, Pendlebury, Pendleton and Salford and to Warrington ; via Atherton, Leigh, Lowton, Newton and Winwick.

The tramways committee of the Bolton Corporation reports in favour of a proposal for the inauguration of a joint service of motorbuses from Bolton to Warrington by the corporation and the Lancashire United Transport and Power Co., Ltd.

Leeds Corporation is seeking sanction to borrow 112,000 for the purchase of land and property in Goodman Street and Doniethorpe Street for the provision of garage accommodation for motorbuses.

The tramways committee of the Bolton Corporation Agreed to reduee the fare on the express but: service between the town and Manchester from le. 8d. to Is. 6d. for the return journey.

Application is being made to the Bolton Corporation by Mr. Frank J. Wood for p.ermiesion to ply for hiee in the borough with motorbuses on the service from Burnley. to Manchester, via Blackburn and Bolton.

At a meeting of the Bolton Watch Committee a letter was received from Mr. J. R. Tog,narelli stating that he intends to ieaugurate a bus service between Manchester, Bolton, Blackburn,. Accrington and Burnley, and applying for a licence to pick up and set down passengers at Trinity Street, Bolton. The committee deferred consideration of the matter until its next meeting.