One Hears Of many Scots being highly elated at the comprehensive and national character of their fine Motor Show. 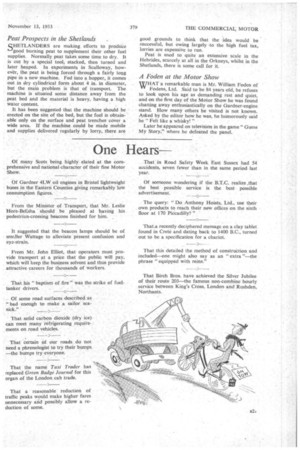 Page 61, 13th November 1953 — One Hears Of many Scots being highly elated at the comprehensive and national character of their fine Motor Show.
Close
Noticed an error?
If you've noticed an error in this article please click here to report it so we can fix it.
Keywords : Counties Of England, Leslie Hore-belisha, 1st Baron Hore-belisha, British People, Road Safety, Road Transport, Road Traffic Safety, Bumps Race, Northamptonshire, Rushden, Local Government In England

From the Minister of Transport, that Mr. Leslie Hore-Belisha should be pleased at having his pedestrian-crossing beacons finished for him.

It suggested that the beacon lamps should be of smaller Wattage to alleviate present confusion and eye-strain.

From Mr. John Elliot, that operators must provide transport at a price that the public will pay, which will keep the business solvent and thus provide attractive carters for thousands of workers.

That his "baptism of fire" was the strike of fueltanker drivers.

Of some road surfaces• described as "bad enough to make a sailor seasick."

That certain of our roads do not need a phrenologist to try their bumps —the bumps try everyone.

That the name Taxi Trader has replaced Green Badge Journal for this organ of the London cab trade.

That a reasonable reduction of traffic peaks would make higher fares unnecessary and possibly allow a reduction of some. That in Road Safety Week East Sussex had 54 accidents, seven fewer than in the same period last year.

The query: Do Anthony Hoists, Ltd., use their own products to reach their new offices on the sixth floor at 170 Piccadilly?"

That.a recently deciphered message on a clay tablet found in Crete and dating back to 1400 B.C., turned out to be a specification for a chariot.

That this detailed the method of construction and included—one might also say as an "extra "—the phrase "equipped with reins."

That Birch Bros. have achieved the Silver Jubilee of their route 203—the famous non-combine hourly service between King's Cross, London and Rushden, Northants.