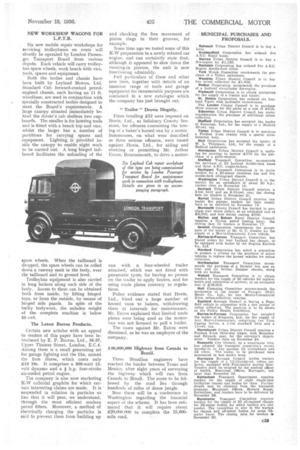 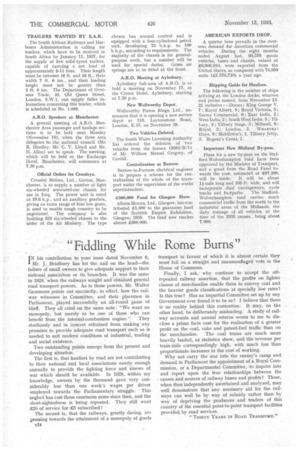 Page 77, 13th November 1936 — NEW WORKSHOP WAGONS FOR L.P.T.B.
Close
Noticed an error?
If you've noticed an error in this article please click here to report it so we can fix it.
Keywords : Leyland Motors, Crossley Motors, Trolleybus, Albion Motors

. Both the bodies and chassis have been built by Leyland Motors, Ltd. Standard Cub forward-control petrolengined chassis, each having an 11 ft. wheelbase, are used in conjunction with specially constructed bodiesdesigned to meet the Board's requirements. A large canopy situated immediately behind the driver's cab shelters two cupboards. The smaller is for housing tools and is fitted with a bench top and vice, whilst the larger has a number of partitions for carrying spares and equipment. Lighting. is provided inside the canopy to enable night work to be carried out A long hinged tailboard facilitates the unloading of the spare wheels. When the tailboard is dropped, the spare wheels can be rolled down a runway sunk in the body, over the tailboard and to ground level.

Trolleybus equipment is also carried in long lockers along each side of the body. Access to these can be obtained both from inside, by lifting hinged tops, or from the outside, by means of hinged side panels. In spite of the bulky bodywork, the unladen weight of thecomplete machine is below 50 cwt.

Certain new articles with an appeal to readers of this paper have been introduced by E. P. Barrus, Ltd., 35-37, Upper Thames Street, London, E.C.4. Among them is a small generating set for garage lighting and the like, named the Iron Horse, which costs only £19 10s. It comprises a 300-watt 12volt dynamo and a I h.p. four-stroke air-cooled petrol engine.

The company is also now marketing K-W colloidal graphite for which certain interesting claims are made. It is suspended in solution in particles so fine that it will pass, we understand, through the most efficient modern petrol filters. Moreover, a method of electrically charging the particles is said to prevent them from building up

and checking the free movement of piston rings in their grooves, for example.

Some time ago we tested some of this K-W preparation in a newly rebored car engine, and can certaintly state that, although it appeared to slow down the running-in process, the unit is now functioning. admirably.

particulars of these and other new lines, together with details of an immense range of tools and garage equipment for innumerable purposes are contained in a new catalogue which the company has just brought out

Fines totalling £12 were imposed on Hovis, Ltd,, at Salisbury County Sessions, for offences concerning the towing of a baker's horsed van by a motor. Summonses, on what were described as three serious offences, were issued against Hovis, Ltd., for aiding and nbettiug or permitting Mr. Arthur Eaton, Bournemouth, to drive a motor van with a four-wheeled trailer attached, which was not fitted with pneumatic tyres, for having no person on the trailer to apply brakes, and for using trade plates contrary to regulations.

Police evidence stated that .Hovis. Ltd., hired out a large number of horsed vans to bakers, .withdrawing them at intervals for maintenance. Mr. Eaton explained that limited trade plates were being used as the motorvan was not licensed to pull a trailer.

The cases against Mr. Eaton were dismissed, as he was an employee of the company.

Three Brazilian engineers have reached the border between Texas and Mexico, after eight years of surveying the highway which will run from Canada to Brazil. The route to be followed by the road lies through hundreds of miles of dense jungle.

Now there will be a conference in Washington regarding the financial aspect of the scheme. It has been estimated that it will require about £20,000,000 to complete the 15,000mile road.

The South African Railways and Harbours Administration is calling for tenders, which have to be received in South Africa by January 11, 1937, for the supply of five solid-tyred trailers, capable of carrying a net load of approximately 9-11 tons. Their length must be between 16 ft. and 20 ft., their width 7 ft. 6 ins., and their loading height must not be greater than 2 ft. 6 ins. The Department of Overseas Trade, 35, Old Queen Street, London, S.W.1, can supply fuller information concerning this tender, which is scheduled as No. 1,099.

A general meeting of A.R.O. Manchester Area passenger and haulage sections is to be held next Monday (November 16), when the three area delegates to the national council (Mr. R. Hindley, Mr. C. Y. Lloyd and Mr. II. Allen) are to speak. The meeting, which will be held at the Exchange Hotel, Manchester, will commence at 7.80 p.m.

Crossley Motors, Ltd., Gorton, Manchester, is to supply a ntimber of light six-wheeled armoured-car chassis for use in Iraq. The power unit is rated at 19.6 h.p., and an auxiliary gearbox, giving an extra range of four low gears, is used to enable rough country to be ,negotiated, The company is also building 528 six-wheeled chassis to the "order of the Air Ministry. The type chosen has normal control and is equipped with a four-cylindered petrol unit, developing 75 b.h.p. to 100 b.h.p., according to requirements. The majority of the chassis is for generalpurpose work, but a number will be used for special duties. Gruss air springs are to be fitted at the front.

Aylesbury Sub-area of A.R.O. is to hold a meeting on November 17, at the Crown Hotel, Aylesbury, starting at 7.30 p.m.

Wellworthy Piston Rings, Ltd., announces that it is opening a new service depot at 110, Leytonstone Road, London, E.15, on November 19.

Two Vehicles Deleted, The South Wales Licensing Authority has ordered the deletion of two vehicles from the licence (2083/B/1) of Mr. William Mansel Gregory, of Cardiff.

Barrow-in-Furness electrical engineer is to prepare a scheme for the centralization of the whole of the transport under the supervision of the works superintendent.

A quieter tone prevails in the overseas demand for American commercial vehicles, During the eight months ended August last, 66,576 goods vehicles, buses and chassis, valued at £6,900,810, were exported from the United States, as compared with 74,800 units (£7,578,710) a year ago.

Plans for a new by-pass on the Stafford-Wolverhampton road have been approved by the Minister of Transport, and a grant from the Road Fund towards the cost, estimated at £97,500, will be made. It will be about li-mile long and 105 ft. wide, and will incorporate dual carriageways, cycle

tracks and footpaths. The StaffordWolverhampton road carries much commercial traffic from the north to the industrial areas of the Midlands, the daily tonnage of all vehicles, at the time of the 1935 census, being about 7,000.