Alliance & Leicester has built itself up from a bit 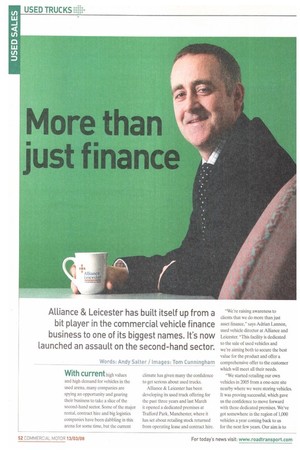 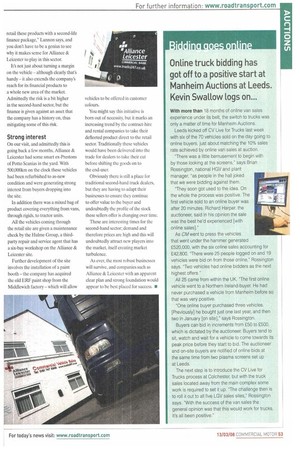 player in the commercial vehicle finance business to one of its biggest names. It's now Launched an assault on the second-hand sector.

With current high values and high demand for vehicles in the used arena, many companies are spying an opportunity and gearing their business to take a slice of the second-hand sector. Some of the major rental, contract hire and big logistics companies have been dabbling in this arena for some time, but the current climate has given many the confidence to get serious about used trucks.

Alliance & Leicester has been developing its used truck offering for the past three years and last March it opened a dedicated premises at Trafford Park, Manchester, where it has set about retailing stock returned from operating lease and contract hire. "We're raising awareness to clients that we do more than just asset finance," says Adrian Lannon, used vehicle director at Alliance and Leicester. "This facility is dedicated to the sale of used vehicles and we're aiming both to secure the best value for the product and offer a comprehensive offer to the customer which will meet all their needs.

"We started retailing our own vehicles in 2005 from a one-acre site nearby where we were storing vehicles. It was proving successful, which gave us the confidence to move forward with these dedicated premises. We've got somewhere in the region of 1,000 vehicles a year coming back to us for the next few years. Our aim is to retail these products with a second-life finance package," Lannon says, and you don't have to be a genius to see why it makes sense for Affiance & Leicester to play in this sector.

It's not just about turning a margin on the vehicle although clearly that's handy it also extends the company's reach for its financial products to a whole new area of the market. Admittedly the risk is a bit higher in the second-hand sector, but the finance is given against an asset that the company has a history on, thus mitigating some of this risk.

On our visit, and admittedly this is going back a few months. Alliance & Leicester had some smart ex-Prestons of Potto Scanias in the yard. With 500,000km on the clock these vehicles had been refurbished to as-new condition and were generating strong interest from buyers dropping into the site.

In addition there was a mixed bag of product covering everything from vans, through rigids, to tractor units.

All the vehicles coming through the retail site are given a maintenance check by the Hulme Group, a thirdparty repair and service agent that has a six-bay workshop on the Alliance & Leicester site.

Further development of the site involves the installation of a paint booth the company has acquired the old ERF paint shop from the Middlewich factory which will allow vehicles to be offered in customer colours.

You might say this initiative is born out of necessity, but it marks an increasing trend by the contract-hire and rental companies to take their defleeted product direct to the retail sector. Traditionally these vehicles would have been delivered into the trade for dealers to take their cut before shifting the goods on to the end-user.

Obviously there is still a place for traditional second-hand truck dealers, but they are having to adapt their businesses to ensure they continue to offer value to the buyer and undoubtedly the profile of the stock these sellers offer is changing over time.

These are interesting times for the second-hand sector; demand and therefore prices are high and this will undoubtedly attract new players into the market, itself creating market turbulence.

As ever, the most robust businesses will survive, and companies such as Alliance & Leicester with an apparent clear plan and strong foundation would appear to be best placed for success. •