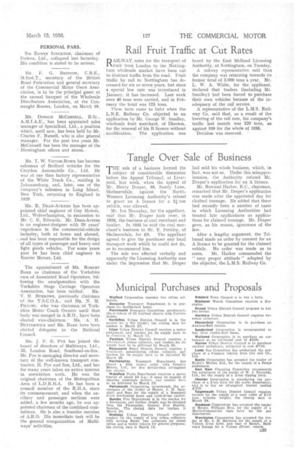 Page 75, 13th March 1936 — PERSONAL PARS.
Close
Noticed an error?
If you've noticed an error in this article please click here to report it so we can fix it.
Keywords : Business / Finance

Mn, DONALD MCCONNELL, B.Sc., A.M.I.A.E., has been appointed sales manager of Specialloid, Ltd., a position Which, until now, has been held by Mr. Charles F. Russell, who is also general manager, For the past two years Mr. McConnell has been the manager of the Birmingham offices and stores.

MR. T. W. Vic-roit-RowE has become salesman of Bedford vehicles for the Croydon Automobile Co., Ltd. He was at one time factory representative of the White Truck Co., residing in Johannesburg, and, later, one of the company's salesmen in Long Island, New York, returning to England in _1929.

MR. R. DEAN-AVERNS has been appointed chief engineer of Guy Motors, . Ltd., Wolverhampton, in succession to Mr. C. K. Edwards. Mr. Dean-Averns is an engineer-designer with 28 years' experience in the commercial-vehicle industry, both • at home and abroad, and has been responsible for the design of all types of passenger and heavy and light goods vehicles. For some years past he has been chief engineer to Karrier Motors, Ltd.

The appointment of Mit. ROERRT "BARR as chairman of the Yorkshire area of Associated Road Operators, following the • amalgamation with the Yorkshire Stage • Carriage Operators

Ms.. J. F. E. PYR has joined the .board of directors of Multiways, Ltd., 35, London Road, Southend-on-Sea. Mr. Pye is maria.ging director and secre..tary of the well-known transport contractor, H. Pye and Son, Ltd., and has for many years taken an active interest

• in. association work. He was, the original chairman of the Metropolitan Area of L.D.R.H.A. He has been a council member of the R.H.A. since its commencement, and when the ancillary and passenger sections were .added, a few months ago,. he was appointed chairman of the combined committees.. He is also .a founder member

A.R.O. His immediate task will be the general reorganization ,of. Multiways' activities.