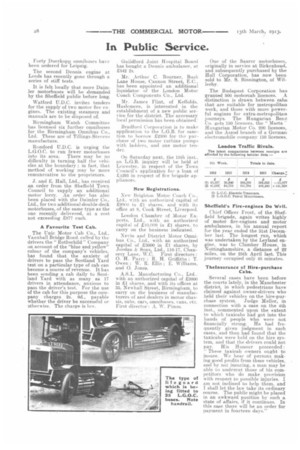 Page 8, 13th March 1913 — In Public Service.
Close
Noticed an error?
If you've noticed an error in this article please click here to report it so we can fix it.
Keywords : Taxicab, Truck

Forty Duerkopp omnibuses have been ordered for Leipzig.

The second Dennis engine at Leeds has recently gone through a series of stiff tests.

It is felt locally that more Daimler motorbuses will be demanded by the Sheffield public before long.

Watford U.D.C. invites tenders for the supply of two motor fire engines_ The existing steamers and manuals are to be disposed of.

Birmingham Watch Committee has licensed six further omnibuses for the Birmingham Omnibus Co.. Ltd. These are of Tillings-Stevens manufacture.

Rumford U.D.C. is urging the L.G.O.C. to run fewer motorbuses into its area. There may be no difficulty in turning half the vehicles at the boundary ; in fact, that method of working may be more remunerative to the proprietors.

J. and E. Hall, Ltd., has received an order from the Sheffield Town Council to supply an additional motor lorry. An order has also been placed with the Daimler Co.. Ltd., for two additional double-deck motorbuses, of the same type as the one recently delivered, at a cost not exceeding 2877 each.

The Unic Motor Cab Co., Ltd.. Vauxhall Bridge Road. called by the drivers the "Rothschild" Company on account of the "blue and yellow" colour of the company's vehicles, has found that the anxiety of drivers to pass the Scotland Yard test on a particular type of cab can become a source of revenue, It has been sending a cab daily to Scotland Yard with as many as 17 drivers in attendance, anxious to pass the driver's test. For the use of the cab for this purpose the company charges 2s. 6c1., payable whether the driver be successful or stherwise. The charge is low. Guildford Joint Hospital Board has bought a Dennis ambulance, at £542 9s.

Mr. James Flint, of Keffolds, Ha,sletuere, is interested in the establishment of a new public service for the district. The necessary local permission has been obtained.'

Bradford C'orporation is to make application to the L.G.B. for sanction to borrow £2300 for the purchase of two motor turbine pumps with ladders, and one motor tender.

On Saturday next, the 16th inst., an L.G.B. inquiry will be held at Leicester, in respect of the Town Council's application for a. loan of 1-1)95 in respect of fire brigade appliances.

A.S.L. Manufacturing Co., Ltd.. with an authorized capital of 13000 in 11 shares, and with its offices at 35, Newhall -Street, Birmingham, to carry on the business of manufacturers of and dealers in motor chassis, cabs. cars, omnibuses, vans, etc. First director : A. W. Pimm. One of the Saurer motorbuses, originally in service at Birkenhead, and subsequently purchased by the Hull Corporation, has DOW been sold to Mr. S. Binnington, of Willerby.

The Budapest Corporation has granted 500 motoreab licences. A distinction is drawn between cabs that are suitable for metropolitan work, and those with more powerful engines for extra-metropolitan journeys. The Hungarian Benz Co. gets 150 licences. the " Marta Hungarian Motor Co. 200 licences, and the Aszod branch of a German electromobile company 150 licences_ Sheffield's Fire-engines Do Well.

Chief Officer Frost, of the Sheffield brigade, again writes highly of motor fire-engines and motor ambulances, in his annual report for the year ended the 31st December last. The longest run, which was undertaken by the Leyland engine, was to Clurnber House, in Nottinghamshire, a distance of 22 miles, on the 25th April last. This journey occupied only 45 minutes.

Several eases have been before the courts lately, in the Manchester district, in which pedestrians have claimed against owner-drivers who held their vehicles on the hire-purchase system. Judge Mellor, in connection with a, ease on the 4th inst., commented upon the extent to which taxicabs had got into the hands of people who were not financially strong. He had frequently given judgment. in such cases, and then had found that the taxicabs were held on the hire system, and that the drivers could not pay. His Honour proceeded : " These taxicab owners ought to insure. We hear of persons making good profits from these vehicles, and by not insuring, a man may be able to undercut those of his competitors who do make provision with respect to possible injuries. I am not inclined to help them. and I shall let the law take its ordinary course. The public might be placed in an awkward position by such a state of affairs, if it continues. In this case there will be an order for payment in fourteen days."