" Heavy Motor Vehicles." A Notable Paper Presented to the I.A.E.• 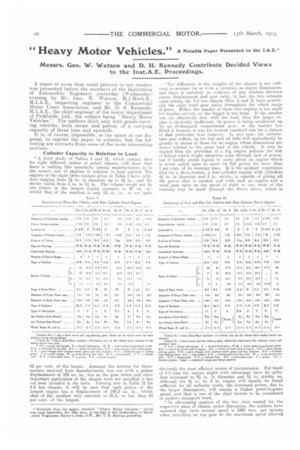 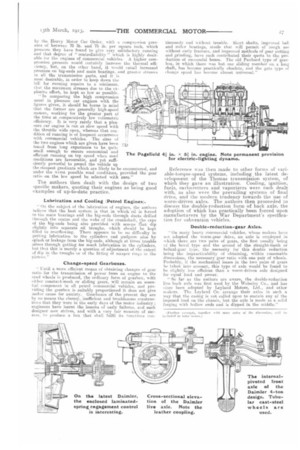 Page 6, 13th March 1913 — " Heavy Motor Vehicles." A Notable Paper Presented to the I.A.E.•
Close
Noticed an error?
If you've noticed an error in this article please click here to report it so we can fix it.
Keywords : Gears, Internal Combustion Engine, Transmission, Diesel Engine, Tatra T813

A paper of more than usual interest to our readers was presented before the members of the Institution of Automobile Engineers yesterday (Wednesday) evening by Mr. Cleo. W. Watson, M.I.Mech.E.. M.I.A.E., inspecting engineer to the Commercial Motor Users Association, and Mr. D. 8. Kennedy, M.I.A.E., the chief engineer of the motor department of Pickfords, Ltd., the subject being "Heavy Motor Vehicles." The authors dealt only with goods-carrying vehicles, both steam and petrol, of a carrying capacity of three tons and upwards.

It is, of course, impossible, in the space at our disposal, to reprint the paper in extenso, but the following are extracts from some of the more interesting sections.

Cylinder Capacity in Relation to Load.

" A brief study of Tables I and II, which contain data for eight different makes of petrol chassis, will show that there is nothing like unanimity among manufacturers as to the correct size of engines in relation to load carried. The engines of the eight three-tonners given in Table I have cylinders ranging from 3i in. in diameter up to 41 in., and the stroke varies from 5 in. to 5; in. The volume swept out by one piston in the largest. engine amounts to 91 cu. in., whilst that of the smallest is only 65 eit. in., or not quite 62 per cent. of the larger. Amongst the returns for threetonners received from manufacturers was one with a piston displacement of 108 cu. in., but as the gear ratios and other important particulars of the chassis were not specified it has not been included in the table. Turning now to Table II for 4-5 ton chassis, it will be seen that each piston of the largest engine has a displacement of 149.3 Cu. in.. whilst that of the smallest only amounts to 81.6, or less than 65 per cent, of the largest. " The difference in the weights of the chassis is not sufficient to account for so wide a variation in engine dimensions, and there is certainly no evidence of any relation between piston displacement and gear ratio, in fact the two extreme eases among the 4-5 ton chassis (Nos. 1 and 2) have practically the same total gear ratios throughout the whole range of gears. Either the smaller of these two engines is too small for regular service, or the bigger is too large. If the smaller one can effectively deal with the load, then the larger engine is obviously inefficient, its power is being swallowed up by an ill-designed transmission gear, or the builder has fitted it because it was his nearest .standard size for a chassia of that particular load capacity. In any case, the unfortunate user suffers, as his fuel and oil bills will undoubtedly he greatly in excess of those for an engine whose dimensions are better related to the gross load of the vehicle. It may be argued that the provision of a big engine reduces the risk of delays which might otherwise arise through lack of power, but it hardly seems logical to carry about an engine which is never called upon to exert its full power for more than 1 per cent, of its running time. It is the authors' experience that for a three-tanner, a four-cylinder engine with cylinders

in. in diameter and 5 in. stroke, is capable of giving all the power that is needed, and with such an engine and a total gear ratio on top speed of eight to one, most of the running may be made through the direct drive, which is

obviously the most efficient means of transmission. For loads of 4-5 tons the engine might with advantage have its cylinders increased to 41 in. in diameter and 5i in. stroke, as, although the 44 in. by 6 in. engine will usually be found sufficient for all ordinary needs, the increased power, due to the larger dimensions, will ensure a higher point-to-point speed, and that is one of the chief factors to be considered in modern transport work.

"In advocating engines of the two sizes named for the respective sizes of chassis under discussion, the authors have assumed that. their normal speed is 1000 revs, per minute when travelling on top gear at the maximum speed allowed

by the Heavy Motor Car Order, with a compression pressure of between 70 lb. and 75 lb. per square inch, which pressure they have found to give very satisfactory running and that degree of " controllability " which is highly desirable for the engines of commercial vehicles. A higher compression pressure would certainly increase the thermal efficiency, but, on the other hand, it would entail increased pressure on big-ends and main bearings, and greater stresses in all the transmission parts, and it is most desirable, in order to keep down the bill for running repairs to a minimum. that. the maximum stresses due to the explosive effort, be kept as low as possible. "In comparing the high compression usual in pleasure car engines with the figures given, it should be borne in mind that the former are generally high-speed motors, working for the greater part of the time at comparatively low volumetric efficiency. It is very rarely that a pleasure ear engine is run at slow speed with tho throttle wide open, whereas that condition of running is of frequent occurrence with commercial vehicles. The sizes of the two engines which are given have been found from long experience to be quite small enough to ensure economical and efficient running on top speed when road conditions are favourable, and yet sufficiently powerful to propel the vehicle up the steepest gradients which are likely to be encountered, and under the wcrst possible road conditions, provided the gear ratio on the low speed be selected with care."

The authors then dealt with the design of two specific makers, quoting their engines as being good examples of up-to-date practice.

" On the subject of the lubrication of engines, the authors believe that the best system is that in which oil is forced to the main bearings and the big-ends through ducts drilled through the centre and the webs of the crankshaft, the caps of the big-ends being also provided with scoops that dip slightly into separate oil troughs, which should be kept, filled to overflowing. There appears to be no difficulty in getting lubrication to the cylinders and gudgeon pins by splash or leakage from the big-ends, although at times trouble arises through getting too much lubrication in the cylinders, but that this is merely a question of adjustment of the extent of dip in the troughs or of the fitting of scraper rings in the pistons."

7' Until a more efficient means of obtaining changes of gear ratio for the transmission of power from an engine to the road wheels is produced, the ordinary form of gearbox, with either constant-mesh or sliding gears, will remain an essential component in all petrol commercial vehicles, and providing the gearbox is suitably proportioned it does not give undue cause for anxiety. Gearboxes of the present day are by no means the clumsy, inefficient and troublesome constructions that they were in the early days of the motor industry ; engineers have learnt the lessons of early failures, and each designer now strives, and with a very fair measure of success, to produce a box that shall fulfil its flinctiens eon

tinuously and without trouble. Short shafts, improved ball and roller bearings, steels that will permit of rough use without early fracture, and improved methods of gear cutting and grinding, have each contributed their quota to the pro. duction of successful boxes. The old Panhard type of gearbox, in which there was but one sliding member oil a long shaft, has become practically obsolete, and the gate type of change speed has become almost universal."

Reference was then made to other forms of variable-torque-speed systems, including the latest development of the Thomas transmission system, of which they gave an illustration. Cooling, ignition, fuels, carburetters and vaporizers were each dealt with, as also were the prevailing systems of final drive, and the modern tendency towards the use of worm-driven axles. The authors then proceeded to discuss the double-reduction form of back axle, the adoption of which has practically been forced upon manufacturers by the -War Department's specification for subvention vehicles.

`‘ On many heavy commercial vehicles, whose makers have not adopted the worm-gear drive, an axle is employed in which there are two pairs of gears, the first usually being it the bevel type and the second of the straight-tooth or helical-gear type, the necessity for this double reduction being the impracticability of obtaining, within reasonable dimensions, the necessary gear ratio with one pair of wheels. Probably, ii the mechanical losses in the two pairs of gears he taken into account, this type of axle would be found to be slightly less efficient than a worm-driven axle designed for equal load and power.

" So far as the authors are aware, the double-reduction live back axle was first used by the Wolseley Co., and has since been adopted by Leyland Motors, Ltd., and other makers. The Leyland Co. arrange their axles in such a way that the casing is not called upon to sustain any of the imposed load on the chassis, but the axle is made as a solid forging with hollow ends and is dipped in the middle."