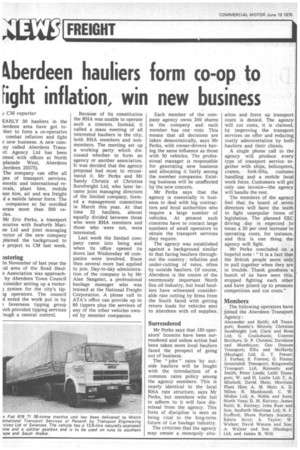 EARLY 50 hauliers in the berdeen area have got tother to form a co-operative combat inflation and fight r new business. A new com.ny called Aberdeen Transirt Agency Ltd has been rrned with offices at North ;planade West, Aberdeen .berdeen 25575).

In November of last year the al area of the Road Haule Association was approachby Aberdeen Town Council consider setting up a roster; system for the city's tipig operators. The council d noted the work put in by Inverness tipping group Lich provided tipping services .ough a central control. Because of its constitution the RHA was unable to operate such a concern. Instead, it called a mass meeting of all interested hauliers in the city, both RHA members and nonmembers. The meeting set up a working party which discussed whether to form an agency or another association. It was decided that the agency proposal had most to recommend it. Mr Perks and Mr Sandy Christie of Christies Surefreight Ltd, who later became joint managing directors of the limited company, formed a management committee in March this year. At that time 32 hauliers, almost equally divided between those who were RHA members and those who were not, were interested.

Last week the limited company came into being and when its office opened its doors last Wednesday 46 companies were involved. Since then several more had applied to join. Day-to-day administration of the company is by Mr Alan Sangster, a professional haulage manager who was trained at the National Freight Corporation. A phone call to ATA's office can provide up to 80 tippers plus the services of any of the other vehicles owned by member companies. Each member of the company agency owns. 200 shares in the company . and each member has one vote. This means that all decisions are taken democratically, says Mr Perks, with owner-drivers having the same influence as those with 50 vehicles. The professional manager is responsible for generating new business and allocating it fairly among the member companies. Existing business will be unaffected by the new concern.

Mr Perks says that the agency is essentially in business to deal with big contractors and local authorities who require a large number of vehicles. At present such concerns have to contact large numbers of small operators to obtain the transport services they require.

The agency was established against a background similar to that facing hauliers throughout the country : inflation and under-cutting of rates, often by outside hauliers. Of course, Aberdeen is the centre of the enormously important North Sea oil industry, but local hauliers have witnessed considerable rate cutting by firms from the South faced with getting return loads for vehicles sent to Aberdeen with oil supplies.

Mr Perks says that 150 operators' licences have been surrendered and unless action had been taken more local hauliers faced the prospect of going out of business.

The " joke " rates by outside hauliers will be fought with the introduction of a common rates policy among the agency members. This is nearly identical to the local RHA rate structure, says Mr Perks, but members who fail to adhere to it will face dismissal from the agency. This form of discipline is seen as being vital to the long-term future of Lie haulage industry.

The criticism that the agency may create a monopoly situ ation and force up transport costs is denied. The agency will cut costs, it is claimed, by improving the transport services on offer and reducing costly administration by both hauliers and their clients.

A single phone call to the agency will produce every type of transport service together with ships, helicopters. cranes, fork-lifts, customs handling and a mobile local work force. Customers will get only one invoice—the agency will handle the rest.

The members of the agency feel that its board of seven directors will have the teeth to fight unpopular items of legislation. The planned EEC driving day is expected to mean a 20 per cent increase in operating costs, for instance, and this is one thing the agency will fight.

Mr Perks concluded on a hopeful note : "It is a fact that the British people seem only to pull together when they are in trouble. Thank goodness a bunch of us have seen this, stopped fighting each other . and have joined up to promote competition and cut costs."

The following operators have joined the Aberdeen Transport Agency :