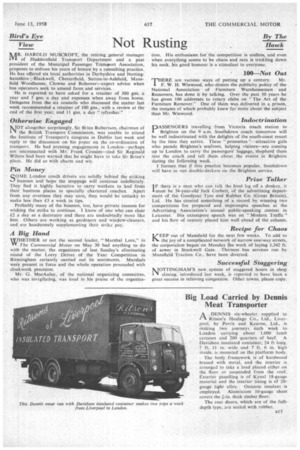 Page 49, 13th June 1958 — Not Rusting
Close
Noticed an error?
If you've noticed an error in this article please click here to report it so we can fix it.
Keywords : Traffic Albums, Brighton, Brighton And Hove, Monarch's Way, Mansfield, Ohio, Traffic, Local Government In England, Ohio, Geography Of England

MR. HAROLD MUSCROFT, the retiring general manager of Huddersfield Transport Department and a past president of the Municipal Passenger Transport Association, proposes to enliven his years of leisure by a consulting practice. He has offered six local authorities in Derbyshire and NottinghamshireBlackwell, Chesterfield, Sutton-in-Ashfield, Mansfield Woodhouse, Clowne and Bolsover—expert advice when bus operators seek to amend fares and services.

He is reported to have asked for a retainer of 300 gns, a year and 5 gns. a day and expenses when away from home. Delegates from the six councils who discussed the matter last week recommended a retainer of 100 gns., with a review at the end of the first year, and 11 gns, a day "refresher."

the British Transport Commission, was unable to attend the Institute of Transport's congress in Dublin last week and reply to the .discussion on his paper on the co-ordination of transport. He had pressing engagements in London—perhaps not unconnected with Mr. Frank Cousini—and Sir Reginald Wilson had been warned that he might have to take Sir Brian's place. He did so with charm and wit.

QOME London coach drivers are solidly behind the striking busmen and hope the stoppage will continue indefinitely. They find it highly lucrative to . carry workers to 'and from their business places in specially chartered coaches. Apart from any overtime they May earn, they would be unlucky to make less than £3 a week in tips.

Probably many of the busmen, too, have private reasons for wishing the strike to continue. I know of one who can clear £2 a day as a decorator and there are undoubtedly more like him Others are working as gardeners and window-cleaners, and are handsomely supplementing their strike pay,

'WHETHER or not the second leader, " Marshal Lore," in vv The Commercial Motor on May 30 had anything to do with the matter, the organizers of last Sunday's eliminating round of the Lorry 'Driver of the Year Competition in Birmingham certainly carried out its sentiments. Marshals were present in force and the whole operation proceeded with clockwork precision.

Mr. G. MacAulay, of the national organizing committee, who was invigilating, was loud in his praise of the organiza

tion. His enthusiasm for the competition is endless, and even when everything seems to be chaos and rain is trickling down his neck, his good humour is a stimulant to everyone.

100—Not Out THERE are various ways of putting up a century. Mr.

F. W. H. Winwood, who directs the publicity policy of the National Association of Furniture Warehousemen and Removers, has done it by talking. Over the past 30 years he has given 100 addresses to rotary clubs on "The Art of the Furniture Remover," One of them was delivered in a prison, the inmates of which probably knew far more about the subject than Mr. Winwood.

PASSENGERS travelling from Victoria coach station to Brighton on the 9 a.m. Southdown coach tomorrow will be well indoctrinated with the delights of the south-coast resort by the time they arrive. Three " promettes "—attractive girls who parade Brighton's seafront, helping visitors—are coming up to London to carry the passengers' luggage, shepherd them into the coach and tell them about the events in Brighton during the following week.

I foresee that if this practice becomes popular, Southdown will have to run double-deckers on the Brighton service.

I F there is a man who can talk the hind leg off a donkey, it

must be 34-year-old Jack Corbett, of the advertising department of the Goodyear Tyre and Rubber Co, (Great Britain), Ltd. He. has created something of a record by winning two competitions for prepared and impromptu speeches at the Advertising Association's annual public-speaking contest. in Leicester. His extempore speech was on" Modern Traffic" and his flow of oratory placed him well ahead of the column.

KEEP out of Mansfield for the next few weeks. To add to the joy of a complicated network of narrow one-way streets,. the corporation began on Monday fhe work of laying 1,342 ft. of sewer in Stockwell Gate. Thirteen bus services run by Mansfield Traction Co.; have been diverted.

MOTTINGHAM'S new, system of staggered hours in shop I 11 closing, introduced last week, is reported to have been a great success in relieving congestion. Other towns, please copy.