Last Chance for Unit Buyers • H ALILlERS have only until Wednesday 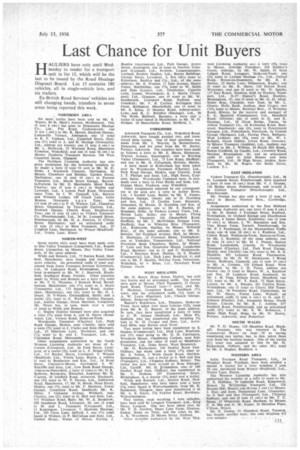 Page 69, 13th July 1956 — Last Chance for Unit Buyers • H ALILlERS have only until Wednesday
Close
Noticed an error?
If you've noticed an error in this article please click here to report it so we can fix it.
Keywords : Trucks

to tender for a transport unit in list IS, which will be the last to be issued by the Road Haulage Disposal Board. List 15 contains 180 vehicles, all in single-vehicle lots, and six trailers.

YORKSHIRE Ackworth Transport Co., Ltd., Wakefield Road, Ackworth, have bought another two, and trans. fared three lorries, One of their purchases was made from Mr. J. Warren, 2a Bennetthorpe, Doncaster, and the other from Mr. W. Storey. Pot-tare, Ackworth. The transfers have been made as follows; a lorry to Mr. E. Maeer, Shenstone, Warren Avenue, Knoningley; one to Riveling valley (Transport), Ltd., 75 Low Road, Sheffield; and one to Mr. H. Fillineham. liellaby, Maltby.

A lorry based at Rotherham has been taken over by Woodcocks Transport (Charley), Ltd.; Park Road Garage. Ruskin, near Chorley. from J. la Phillips and Sons', Ltd., High Street, Coalport, Salop. Woodcocks Transport have. in turn, made over a lorry to Fred Hardy and Sons, Ltd. Grange Moor, Flockton, near Wakefield.

Mr, F. a Hoppe. 158 Mumbles Road. Blackpill, Swansea, who was reported in The Commercial Motor on June 29 at having transferrW, two lorries. has, in tam taken these over from 'the hauliers named. One of the lorries Ole tons) was assigned to him by Mr. G. Richardson, Ordbune and the other (6% tons) by Mr. S. Hughes, Bradford. 4.