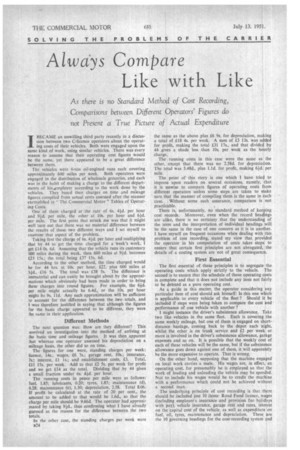 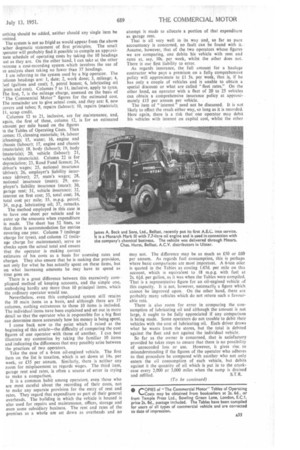 Page 58, 13th July 1951 — Always Compare Like with Like
Close
Noticed an error?
If you've noticed an error in this article please click here to report it so we can fix it.

As there is no Standard Method of Cost Recording, Comparisons between Different Operators' Figures do not Present a True Picture of Actual Expenditure /BECAME an unwilling third party recently in a discussion between two C-licence operators about the operating costs of their vehicles. Both were engaged upon the same kind of work, using similar vehicles. There was every reason to assume that their operating cost figures would be the same, yet there appeared to be a great difference

The vehicles were 6-ton oil-engined vans each covering approximately 600 miles per week. Both operators were engaged in the distribution of wholesale groceries, and each was in the habit of making a charge to the different departments of his,gmployer according to the work done by the vehicles. They based their charges on time and mileage figures compiled from actual costs assessed after the manner exemplified in " The Commercial Motor" Tables of Operating Costs.

One of them charged at the rate of 6s. 41d. per hour and 91d. per mile, the other at 10s. per hour and 61d. per mile. The first point that struck me was that it might well turn out that there was no material difference between the results of these two different ways and I set myself to examine that aspect of the problem.

According to the other method, the time charged would be for 44 hrs. at 10s. per hour, £22, plus 600 miles at Sid., £16 5s. The total was £38 5s. The difference is immaterial and can easily be brought about by the approximations which obviously had been made in order to bring these charges into round figures. For example, the 64d. per mile might actually be 6.4d., or the 10s. per hour might be 9s. lid. Any such approximation will be sufficient to account for the difference between the two totals, and I was therefore justified in saying that although the figures For the basic charge appeared to be different, they were the same in their application.

The next question was: How are they different? This ,nvolved an investigation into the method of arriving at the basic time and mileage figures. It was then apparent that whereas one operator assessed his depreciation on a mileage basis, the other did so on time.

The point of this story is one which I have tried to impress upon readers on several occasions, namely, that it is unwise to compare figures of operating costs from different operators unless some steps are taken to make sure that the manner of compiling them is the same in each case. Without some such assurance, comparison is not practicable.

There is, unfortunately, no standard method of keeping cost records. Moreover, even when the record headings are alike, there is no certainty that the understanding of the term and the interpretation of individual headings will be the same in the case of one concern as it is in another. I have myself on frequent occasions when dealing with this problem of cost recording, stated my view that provided the operator in his computation of costs takes steps to ensure that certain first principles are . not abrogated, the details of a costing system are not of great consequence.

The first essential of these principles is to segregate the operating costs which apply strictly to the vehicle. The second is to ensure that the schedule of those operating costs is complete and that it does not include any item not fairly to be debited as a pure operating cost.

As a guide in this matter, the operator considering any particular item of cost should ask himself: Is this one which is applicable to every vehicle of the fleet ? Should it be included if steps were being taken to compare the cost and performance of one vehicle with another ?

On the other hand, supposing that the machine engaged on local work carries a mate. His wages are, in effect, an operating cost, for presumably he is employed so that the work of loading and unloading the vehicle may be speeded. Not to include his wages would be to credit the machine with a performance which could not be achieved without a second man.

The underlying principle of cost recording is that there should be included just 10 itemsRoad Fund licence, wages (including employer's insurance and provision for holidays with pay), vehicle insurance, garage rent and rates, interest on the capital cost of the vehicle, as well as expenditure on fuel, oil, tyres, maintenance and depreciation. These are the 10 governing headings for the cost-recording system and

iothing should be added, neither should any single item he imitted.

The system is not so frigid as would appear from the above either dogmatic statement of first principles. The small nserator will probably find it possible to compile an approxis nate schedule of operating costs by taking the 10 headings ust as they are. On the other hand, 1 can take at the other :xtreme a cost-recording system which involves the use of in analysis sheet taking no fewer than 37 headings. 1 am referring to the system used by a big operator. The asiumn headings are: 1, date; 2, work done; 3, mileage; 4, fuel (gallons and cost); 5, petrol bonus; 6, lubricating oil :pints and cost). Columns 7 to 11, inclusive, apply to tyres. The first, 7, is the mileage charge, assessed on the basis of 'The Commercial Motor" figures for the estimated cost. The remainder are to give actual costs, and they are: 8, new :overs and tubes; 9, repairs (labour); 10, repairs (material); 11, scrap credit.

The method employed in this case is to have one sheet per vehicle and to enter up the amounts when expenditure is made. The sheet has 52 lines, so that there is accommodation for entries covering one year. Column 7 (mileage James A. Beck and Sons, Ltd., Belfast, recently put its first A.E.C. into service. charge for tyres), and column 12 (milelt Is a Monarch Mark ill with 7.7-litre oil engine and is used in connection with age charge for maintenance), serve as the company's chemical business. The vehicle was delivered through Messrs. checks upon the actual total and ensure Chas. Hurst, Belfast, A.C.V. distributors in Ulster.

that the operator is making correct estimates of his costs as a basis for assessing rates and charges. They also ensure that he is making due provision, not only for what he has actually spent on these items, but on what increasing amounts he may have to spend as time goes on.

There is a great difference between this excessively complicated method of keeping accounts, and the simple one, embodying hardly any more than 10 principal items, which the ordinary operator would use.

Nevertheless, even this complicated system still retains the 10 main items as a basis, and although there are 37 columns, nothing extraneous to those 10 items is included. The individual items nave been explained and set out in more detail so that the operator who is responsible for a big fleet can determine more accurately how his money is being spent.

1 come back now to the point which 1 raised at the beginning of this article-the difficulty of comparing the cost figures of one operator with those of another. 1 can best illustrate my contention by taking the familiar 10 items and indicating the differences that may possibly arise between the practices of two operators. Take the case of a 6-ton oil-engined vehicle. The first item on the list is taxation, which is set down at 14s. per week, or £35 per annum. Similarly, there is neither any room for misplacement as regards wages. The third item, garage rent and rates, is often a source of error in trying to make a comparison.

It is a common habit among operators, even those who are most careful about the recording of their costs, not to make any separate provision for the entry of rent and rates. They regard that expenditure as part of their general overheads. The building in which the vehicle is housed is also used for repairs and maintenance, offices, storage and even some subsidiary business. The rent and rates of the premises as a whole are set down as overheads and no attempt is made to allocate a portion of that expenditure as garage rent.

That is all very well in its way and, so far as pure accountancy is concerned, no fault can be found with it.. Assume, however, that of the two operators whose figures we are comparing, one debits his vehicle with rent and rates at, say, 10s. per week, whilst the other does not. There is our first liability to error.

As regards insurance, the full amount for a haulage contractor who pays a premium on a fully comprehensive policy will approximate to £1 5s. per week, that is, if he has only a couple of vehicles and is unable to obtain a special discount or what are called "fleet rates." On the other hand, an operator with a fleet of 20 to 25 vehicles can obtain a comprehensive insurance policy at approximately £15 per annum per vehicle.

The item of "interest" need not be discussed. It is not likely to affect the result either way, so long as it is recorded. Here again, there is a risk that one operator may debit his vehicles with interest on capital cost, whilst the other may not. The difference may be as much as £50 or £60 per annum. As regards fuel consumption, this is perhaps where basic comparisons are most important. A 6-ton oiler is quoted in the Tables as costing 1.67d. per mile on this account, which is equivalent to 18 m.p.g. with fuel at 2s. Rd. per gallon, as it was when the Tables were compiled. That is a representative figure for an oil-engined vehicle of this capacity. It is not, however, necessarily a figure which cannot be improved upon. On the other hand, there are probably many vehicles which do not return such a favourable rate.

There is also room for error in comparing the consumption of lubricating oil and although the amount is not large, it ought to be fully appreciated if any comparison is being made. Some operators do not trouble to debit their vehicles with the cost of lubricating oil. Each driver draws what he wants from the stores, but the total is debited against the fleet and not against the individual vehicle.

So far as the owner is concerned, that is satisfactory provided he takes steps to ensure that there is no possibility of unrecorded loss or use. However, it gives rise, to misunderstanding if the figures of the operator who adheres to that procedure be compared with another who not only enters the oil consumption of each vehicle, but debits against it the quantity of oil which is put in to the crankcase every 2,000 or 3,000 miles when the sump is drained and refilled.