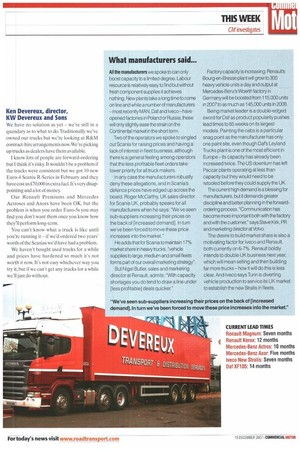 All the manufacturers we spoke to can only boost capacity to a limited degree. Labour resource is relatively easy to find but without fresh component supplies it achieves nothing. New plants take a long time to come on line and while a number of manufacturers -most recently MAN, Daf and lvecohave opened factories in Poland or Russia, these will only slightly ease the strain on the Continental market in the short term.

Two of the operators we spoke to singled out Scania for raising prices and having a lack of interest in fleet business, although there is a general feeling among operators that the less profitable fleet orders take lower priority for all truck makers.

In any case the manufacturers robustly deny these allegations, and in Scania's defence prices have edged up across the board. Roger McCarthy, UK safes director for Scania UK, probably speaks for all manufacturers when he says: "We've seen sub-suppliers increasing their prices on the back of [increased demand]. In turn we've been forced to move these price increases into the market."

He adds that for Scania to maintain 17% market share in heavy trucks, "vehicle supplies to large, medium and small fleets forms part of our overall marketing strategy".

But Nigel Butler, sales and marketing director at Renault, admits: "With capacity shortages you do tend to draw a line under [less profitable] deals quicker." Factory capacity is increasing: Renault's Bourg-en-Bresse plant will grow to 300 heavy vehicle units a day and output at Mercedes-Benz's Woerth factory in Germany will be boosted from 115,000 units in 2007 to as much as 145,000 units in 2008.

Being market leader is a double-edged sword for Oaf as product popularity pushes lead times to 65 weeks on its largest models. Painting the cabs is a particular snag point as the manufacturer has only one paint site, even though Daf's Leyland Trucks plant is one of the most efficient in Europe its capacity has already been increased twice. The US downturn has left Paccar plants operating at less than capacity but they would need to be retooled before they could supply the UK.

The current high demand is a blessing for manufacturers, but it demands greater discipline and better planning in the forwardordering process. "Communication has become more important both with the factory and with the customer," says Steve Kirk, PR and marketing director at Volvo.

The desire to build market share is also a motivating factor for Iveco and Renault, both currently on 6-7%. Renault boldly intends to double UK business next year, which will mean selling and then building far more truckshow it will do this is less . clear. And Iveco says Turin is diverting vehicle production to service its UK market to establish the new Stralis in fleets.