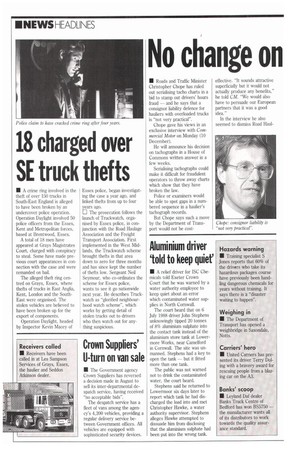 • Roads and Traffic Minister Christopher Chope has ruled out serialising tacho charts in a bid to stamp out drivers' hours fraud — and he says that a consignor liability defence for hauliers with overloaded trucks is "not very practical".

Chope gave his views in an exclusive interview with Commercial Motor on Monday (10 December).

He will announce his decision on tachographs in a House of Commons written answer in a few weeks.

Serialising tachographs could make it difficult for fraudulent operators to throw away charts which show that they have broken the law.

Police or examiners would be able to spot gaps in a numbered sequence in a haulier's tachograph records.

effective. "It sounds attractive superficially but it would not actually produce any benefits," he told CM. "We would also have to persuade our European partners that it was a good idea."

In the interview he also seemed to dismiss Road Haul