THE economic crisis could not be used as an excuse 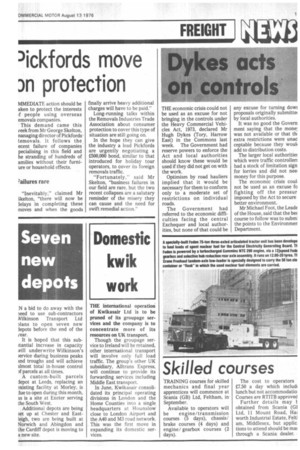 Page 21, 13th August 1976 — THE economic crisis could not be used as an excuse
Close
Noticed an error?
If you've noticed an error in this article please click here to report it so we can fix it.
Keywords : Unac, Politics

for not bringing in the controls under the Heavy Commercial Vehicles Act, 1973, declared Mr Hugh Dykes (Tory, Harrow East) in the Commons last week. The Government had reserve powers to enforce the Act and local authorities should know these would be used if they did not get on with the work.

Optimism by road hauliers implied that it would be necessary for them to conform only to a moderate set of restrictions on individual roads.

The Government had referred to the economic difficulties facing the central Exchequer and local authorities, but none of that could be any excuse for turning dowi proposals originally submitte( by local authorities.

It was no good the Govern ment saying that the mone: was not available or that th, extra restrictions were unac ceptable because they woull add to distribution costs.

The larger local authoritie5 which were traffic controllen had a stock of limitation sign for lorries and did not nee money for this purpose.

The economic crisis coul not be used as an excuse fa fighting off the pressur imposed by the Act to secure better environment.

Mr Michael Foot, the Leade of the House, said that the be, course to follow was to submi the points to the Environmen Department.