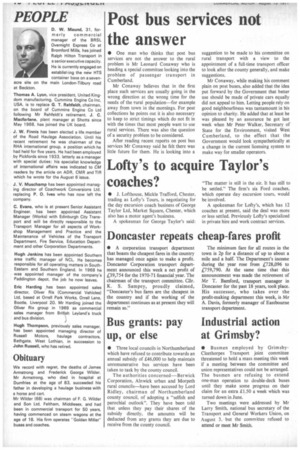 Page 18, 13th August 1971 — Doncaster repeats cheap-fares profit
Close
Noticed an error?
If you've noticed an error in this article please click here to report it so we can fix it.
Keywords : Doncaster, Fare, Business / Finance

• A corporation transport department that boasts the cheapest fares in the country has managed once again to make a profit. Doncaster Corporation transport department announced this week a net profit of £39,754 for the 1970-71 financial year. The chairman of the transport committee. Gift. K. S. Sampey, proudly claimed, "Doncaster's bus fares are the cheapest in the country and if the working of the department continues as at present they will remain so." The minimum fare for all routes in the town is 2p for a distance of up to about a mile and a half. The Department's income during the year rose from £728,096 to £759,790. At the same time that this announcement was made the retirement of Mr T. Bamford, transport manager in Doncaster for the past 18 years, took place. His successor, who takes over the profit-making department this week, is Mr A. Davis, formerly manager of Eastbourne transport department.