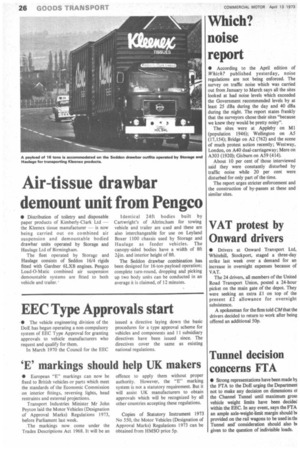 Page 28, 13th April 1973 — 'E' markings should help UK makers
Close
Noticed an error?
If you've noticed an error in this article please click here to report it so we can fix it.
Keywords : Administrative Law, Law In The United Kingdom, Statutory Instrument

• European "E" markings can now be fixed to British vehicles or parts which meet the standards of the Economic Commission on interior fittings, reversing lights, head restraints and external projections.

The markings now come under the Trades Descriptions Act 1968. It will be an offence to apply them without proper authority. However, the "E" marking system is not a statutory requirement. But it will assist UK manufacturers to obtain approvals which will be recognized by all other countries accepting these regulations.

Copies of Statutory Instrument 1973 No 550, the Motor Vehicles (Designation of Approval Marks) Regulations 1973 can be obtained from HMSO price 5p.