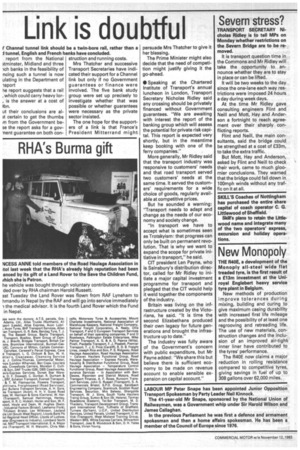 Page 6, 12th November 1983 — Severn stress?
Close
Noticed an error?
If you've noticed an error in this article please click here to report it so we can fix it.
Keywords : Mott, Hay And Anderson, Rail Transport In Great Britain, Severn Bridge, River Severn, Flint

TRANSPORT SECRETARY Nicholas Ridley is to tell MPs on Monday whether restrictions on the Severn Bridge are to be removed.

It is transport question time in the Commons and Mr Ridley will take the opportunity to announce whether they are to stay in place or can be lifted.

It will be two weeks to the day since the one-lane each way restrictions were imposed 24 hours a day during week days.

At the time Mr Ridley gave consulting engineers Flint and Neill and Mott, Hay and Anderson a fortnight to reach agreement over their sharply conflicting reports.

Flint and Neill, the main consultants, said the bridge could be strengthed at a cost of £33m, to take the extra traffic.

But Mott, Hay and Anderson, asked by Flint and Neill to check their work, came to much gloomier conclusions. They warned that the bridge could fall down in 100mph winds without any traffic on it at all.