What is Future of Clearing Houses? 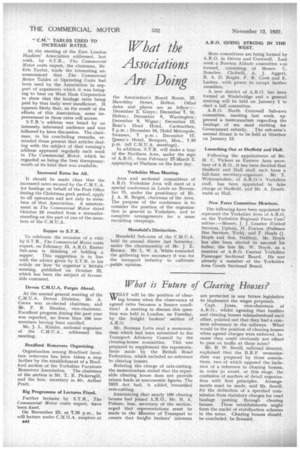 Page 28, 12th November 1937 — What is Future of Clearing Houses?
Close
Noticed an error?
If you've noticed an error in this article please click here to report it so we can fix it.
Keywords : Derivatives, Act, Nasdaq, Futures Contract, Haulage

VUIIAT will be the position of clear ing houses when the observance of agreed rates becomes a licence condition? A meeting to discuss this question was held in London, on Tuesday, by the freight brokers' section of A.R.O.

Mr. Norman Letts read a memorandum which had been submitted to the Transport Advisory Council by the clearing-house committee. This was prepared to supplement the representations made by the British Road Federation, which included no reference to clearing houses.

Refuting the charge of rate-cutting, the memorandum stated that the reputable clearing house does not provide return loads at uneconomic figures. The 1933 Act had, it added, intensified rate-cutting.

Announcing that nearly 100 clearing houses had joined A.R.O., Mr. H. A. Palmer, hon. secretary of the section, urged that representations must be made to the Minister of Transport to ensure that freight brokers' interests are protected in any future legislation to implement the wages proposals.

Capt. Jones, vice-chairman of A.R.O., whilst agreeing that hauliers and clearing houses misunderstood each other, pointed out that they had a common adversary in the railways. What would be the position of clearing houses when agreed charges were enforced, because they could obviously not afford to pass on traffic at those rates? Mr. R. W. Sewill, nalional director, explained that the B.R.F. memorandum was prepared by three associations, two of which opposed the inclusion of a reference to clearing houses, in order to avoid, at this stage, the confusion ofmatters of detail organization with first principles. Arrangements must be made, said Mr. Sewill, for the deduction of a specified commission from statutory charges for road haulage passing through clearing houses. These establishments might form the nuclei of stabilization schemes in the areas. Cleating houses should, he concluded, be licensed.