Can you specify part of your premises only? 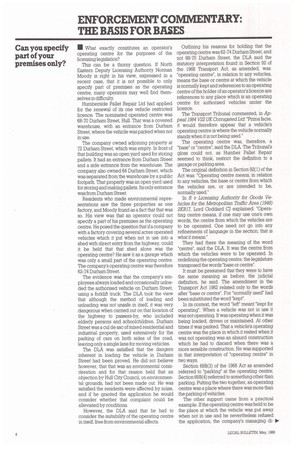 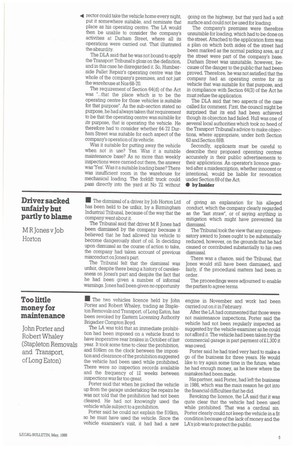 Page 6, 12th May 1988 — Can you specify part of your premises only?
Close
Noticed an error?
If you've noticed an error in this article please click here to report it so we can fix it.
Keywords : Parking, Pallet, Durham

II What exactly constitutes an operator's operating centre for the purposes of the licensing legislation?

This can be a thorny question. If North Eastern Deputy Licensing Authority Norman Moody is right in his view, expressed in a recent case, that it is not possible to only specify part of premises as the operating centre, many operators may well find themselves in difficulty.

Humberside Pallet Repair Ltd had applied for the renewal of its one vehicle restricted licence. The nominated operated centre was 68-70 Durham Street, Hull. That was a covered warehouse, with an entrance from Durham Street, where the vehicle was parked when not in use.

Residents who made environmental representations saw the three properties as one factory, and Moody found as a fact that that was so. His view was that an operator could not specify a part of his premises as the operating centre. He posed the question that if a company with a factory covering several acres operated vehicles which it put when not in use into a shed with direct entry from the highway, could it be held that that shed alone was the operating centre? He saw it as a garage which was only a small part of the operating centre. The company's operating centre was therefore 62-74 Durham Street.

The evidence was that the company's employees always loaded and occasionally unloaded the authorised vehicle on Durham Street, using a forklift truck. The DLA took the view that although the method of loading and unloading was not unsafe in itself, it was very dangerous when carried out on that location of the highway to passers-by, who included elderly persons and schoolchildren. Durham Street was a cul de sac of mixed residential and industrial property, used extensively for the parking of cars on both sides of the road, leaving only a single lane for moving vehicles.

The DLA was satisfied that the dangers inherent in loading the vehicle in Durham Street had been proved. He did not believe however, that that was an enviromental consideration and for that reason held that an objection by Hull City Council, on environmental grounds, had not been made out. He was satisfied the residents were affected by noise, and if he granted the application he would consider whether that complaint could be alleviated by conditions.

However, the DLA said that he had to consider the suitability of the operating centre in itself, free from environmental affects.

The Transport Tribunal commented, in Appeal 1984 V22 UK Corrugated Ltd: "Prima facie, it would therefore appear that a vehicle's operating centre is where the vehicle normally stands when it is not being used.'

The operating centre was, therefore, a "base" or "centre", said the DLA. The Tribunal's gloss could not, as Humber Pallet Repair seemed to think, restrict the definition to a garage or parking area.

The original definition in Section 92(1) of the Act was: "Operating centre means, in relation to any vehicles, the base or centre from which the vehicles are, or are intended to be, normally used."

In R v Licensing Authority for Goods Vehicles for the Metropolitan Traffic Area (1949) 2 KB 17, Lord Goddard CJ explained: 'Operating centre means, if one may use one's own words, the centre from which the vehicles are to be operated. One need not go into any refinements of language in the section; that is what it means."

They had there the meaning of the word "centre", said the DLA. It was the centre from which the vehicles were to be operated. In redefining the operating centre, the legislature transposed the words "base or centre".

It must be presumed that they were to have the same meaning as before; the judicial definition, he said. The amendment in the Transport Act 1982 related only to the words after "base or centre". For 'normally used" had been substituted the word "kept".

In its context, the word "left' meant "kept for operating". When a vehicle was not in use it was not operating. It was operating when it was being loaded, driven or maintained. At other times it was parked. That a vehicle's operating centre was the place in which it rested when it was not operating was an absurd construction which he had to discard when there was a more sensible construction. He was supported in that interpretation of "operating centre" in two ways.

The other support came from a practical example. lithe operating centre was held to be the place at which the vehicle was put away when not in use and he nevertheless refused the application, the company's managing di• • rector could take the vehicle home every night, put it somewhere suitable, and nominate that place as his operating centre. The LA would then be unable to consider the company's activities at Durham Street, where all its operations were carried out. That illustrated the absurdity.

The DLA said that he was not bound to apply the Transport Tribunals gloss on the definition, and in this case he disregarded it. So, Humberside Pallet Repair's operating centre was the whole of the company's premises, and not just the warehouse at Nos 68-70.

Was it suitable for putting away the vehicle when not in use? Yes. Was it a suitable maintenance base? As no more than weekly inspections were carried out there, the answer was 'Yes'. Was it a suitable loading base? There was insufficient room in the warehouse for mechanical loading. The forklift truck could pass directly into the yard at No 72 without going on the highway, but that yard had a soft surface and could not be used for loading.

The company's premises were therefore unsuitable for loading, which had to be done on the street. Attached to the application form was a plan on which both sides of the street had been marked as the normal parking area, as if the street were part of the company's base. Durham Street was unsuitable, however, because of the danger to the public that had been proved. Therefore, he was not satisfied that the company had an operating centre for its vehicle that was suitable for that purpose, and in compliance with Section 64(3) of the Act he must refuse the application.

The DLA said that two aspects of the case called for comment. First, the council might be surprised that its end had been achieved though its objection had failed Hull was one of several local authorities which took no heed of the Transport Tribunal's advice to make objections, where appropriate, under both Section 63 and Section 69B.

Secondly, applicants must be careful to describe their proposed operating centres accurately in their public advertisements to their applications. .An operator's licence granted after a misdescription, whether innocent or intentional, would be liable for revocation under Section 69 of the Act.