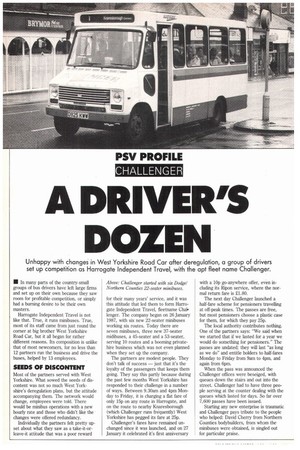 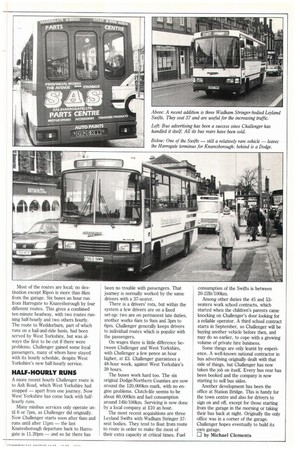 Page 50, 12th May 1988 — A DRIVER'S DOZEN
Close
Noticed an error?
If you've noticed an error in this article please click here to report it so we can fix it.
Keywords : Harrogate, Challenger, Knaresborough

Unhappy with changes in West Yorkshire Road Car after deregulation, a group of drivers set up competition as Harrogate Independent Travel, with the apt fleet name Challenger.

• In many parts of the country, small groups of bus drivers have left large firms and set up on their own because they saw room for profitable competition, or simply had a burning desire to be their own masters.

Harrogate Independent Travel is not like that. True, it runs minibuses. True, most of its staff came from just round the corner at big brother West Yorkshire Road Car, but it all began for rather different reasons_ Its composition is unlike that of most newcomers, for no less than 12 partners run the business and drive the buses, helped by 13 employees.

Most of the partners served with West Yorkshire. What sowed the seeds of discontent was not so much West Yorkshire's deregulation plans, but the attitude accompanying them. The network would change, employees were told. There would be minibus operations with a new hourly rate and those who didn't like the changes were offered redundancy.

Individually the partners felt pretty upset about what they saw as a take-it-orleave-it attitude that was a poor reward for their many years' service, and it was this attitude that led them to form Harrogate Independent Travel, fleetname Chal. lenger. The company began on 26 January 1987, with six new 22-seater minibuses working six routes. Today there are seven minibuses, three new 37-seater midibuses, a 45-seater and a 53-seater, serving 10 routes and a booming privatehire business which was not even planned when they set up the company.

The partners are modest people. They don't talk of success — just that it's the loyalty of the passengers that keeps them going. They say this partly because during the past few months West Yorkshire has responded to their challenge in a number of ways. Between 9.30am and 4pm Monday to Friday, it is charging a flat fare of only 15p on any route in Harrogate, and on the route to nearby Knaresborough (which Challenger runs frequently) West Yorkshire has pegged its fare at 25p.

Challenger's fares have remained unchanged since it was launched, and on 27 January it celebrated it's first anniversary with a lop go-anywhere offer, even including its Ripon service, where the normal return fare is £1.80.

The next day Challenger launched a half-fare scheme for pensioners travelling at off-peak times. The passes are free, but most pensioners choose a plastic case for them, for which they pay 25p.

The local authority contributes nothing. One of the partners says: "We said when we started that if we lasted for a year we would do something for pensioners." The passes are undated; they will last "as long as we do" and entitle holders to half-fares Monday to Friday from 9am to 4pm, and again from 6pm.

When the pass was announced the Challenger offices were beseiged, with queues down the stairs and out into the street. Challenger had to have three people serving at the counter dealing with the queues which lasted for days. So far over 7,600 passes have been issued.

Starting any new enterprise is traumatic and Challenger pays tribute to the people who helped: David Cherry from Northern Counties bodybuilders, from whom the minibuses were obtained, is singled out for particular praise. Most of the routes are local; no destination except Ripon is more than 81un from the garage. Six buses an hour run from Harrogate to Knaresborough by four different routes. This gives a combined ten-minute headway, with two routes running half-hourly and two others hourly. The route to Wedderburn, part of which runs on a hail-and-ride basis, had been served by West Yorkshire, but was always the first to be cut if there were problems. Challenger gained some loyal passengers, many of whom have stayed with its hourly schedule, despite West Yorkshire's new half-hourly service.

Many minibus services only operate until 6 or 7pm, as Challenger did originally. Now Challenger starts soon after 6am and runs until after llpm — the last Knaresborough departure back to Harrogate is 11.20pm — and so far there has been no trouble with passengers. That journey is normally worked by the same drivers with a 37-seater.

There is a drivers' rota, but within the system a few drivers are on a fixed set-up: two are on permanent late duties, another works flam to 9am and 3pm to 6pm. Challenger generally keeps drivers to individual routes which is popular with the passengers.

The buses work hard too. The six original Dodge/Northern Counties are now around the 120,000km mark, with no engine problems. Clutch-life seems to be about 80,000km and fuel consumption around 141W100Iun. Servicing is now done by a local company at £10 an hour.

The most recent acquisitions are three Leyland Swifts with Wadham Stringer 37seat bodies. They tend to float from route to route in order to make the most of their extra capacity at critical times. Fuel consumption of the Swifts is between 20-2211t/1001un.

Among other duties the 45 and 53seaters work school contracts, which started when the children's parents came knocking on Challenger's door looking for a reliable operator. A third school contract starts in September, so Challenger will be buying another vehicle before then, and may do so earlier, to cope with a growing volume of private hire business.

Some things are only learnt by experience. A well-known national contractor in bus advertising originally dealt with that side of things, but Challenger has now taken the job on itself. Every bus rear has been booked and the company is now starting to sell bus sides.

Another development has been the office at Station Bridge. This is handy for the town centre and also for drivers to sign on and off, except for those starting from the garage in the morning or taking their bus back at night. Originally the only office was in a corner of the garage. Challenger hopes eventually to build its own garage.