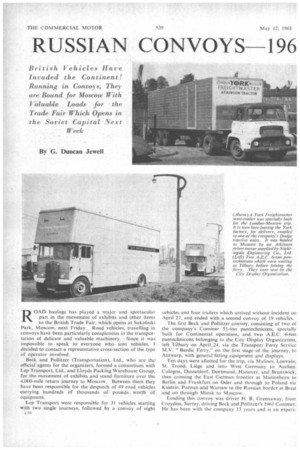 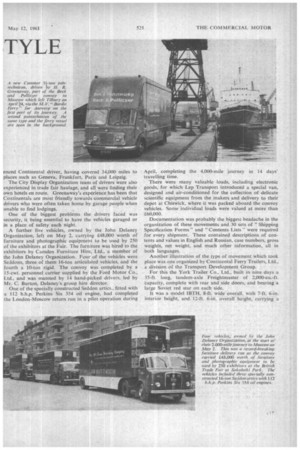 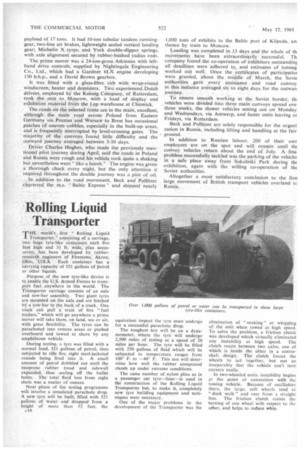 British Vehicles Have Invaded the Continent! Running in Convoys, They are Bound for Moscow With Valuable Loads for the Trade Fair Which Opens in the Soviet Capital Next Week

ROAD haulage has played a major and spectacular part in the movement of exhibits and. other items to the British Trade Fair, which opens at Sokolniki Park, Moscow, next Friday. Road vehicles, trayelling, in convoys have been particularly conspicuous in the transportation of delicate and valuable machinery. Since it was impossible to speak to everyone who Sent vehieles, I decided to contact a representative cross-section of The type of operator involved.

Beck and Pollitzer (Transportation), Ltd., who are the official agents for the organizers, formed a consortium with Lep Transport, Ltd., and Lloyds Packing Warehouse Group, for the movement of exhibits and stand furniture over the 4,000-mile return journey to Moscow. Between them they have been responsible for the despatch of 49 road vehicles carrying hundreds of thousands of pounds worth of. equipment.

Lep Transport were responsible for 31' vehicles starting with two single journeys, followed by a convoy of eight c 16

vehicles and four trailers which arrived without incident on April 27, and ended with a second convoy of 19 vehicles. The first Beck and Pollitzer convoy, consisting of two of the company's Commer 51-ton pantechnicons, _specially built for Continental operation, and two A.E.C. 6-ton pantechnicons belonging to the _City Display Organization. left Tilbury on Apri1,24, via the Transport Ferry Service Bardic Ferry." on the. first stage of the journey, to Antwerp, with generalrfitting equipment and displays.

Ten days were allotted for the trip, via Malines, Louvain, St. Trond, Liege and into West Germany to Aachen, Cologne, Dusseldorf, Dortmund, Hanover, and .Brunswick, then crossing the East German frontier at Marienborn to Berlin and Frankfurt on Oder and through to Poland via Kustrin. Poznan. and Warsaw to the Russian border at Brest and on through Minsk to Moscow.

Leading this convoy was driver H. R. Greenaway. from Croydon, Surrey, driving Beck and Pollitzer's 1961 Commer. He has been with the company 13 years and is an experi enceld Continental driver, having covered 34,000 miles to places such as Geneva, Frankfurt, Paris and Leipzig.

The City Display Organization team of drivers were also experienced in trade fair haulage, and all were finding their own hotels en route. Greenaway's experience has been that Continentals are most friendly towards commercial vehicle drivers who were often taken home by garage people when unable to find lodgings.

One of the biggest problems the drivers faced was security, it being essential to have the vehicles garaged or in a place of safety each night.

A further five vehicles, owned by the John Delaney Organization, left on May 2, carrying £48,000 worth of furniture and photographic equipment to be used by 250 of the exhibitors at the Fair. The furniture was hired to the exhibitors by Camden Furniture Hire, Ltd., a member of the John Delaney Organization. Four of the vehicles were Seddons, three of them 16-ton articulated vehicles, and the Fourth a 10-ton rigid. The convoy was completed by a 15-cwt. personnel carrier supplied by the Ford Motor Co., Ltd., and was manned by 14 hand-picked drivers, led by Mr. C. Burton, Delaney's group hire director.

One of the specially constructed Seddon artics., fitted with a 112 b.h.p. Perkins Six 354 oil engine, had completed the London-Moscow return run in a pilot operation during April, completing the 4,000-mile journey in 14 days' travelling time.

There were many valuable loads, including electronic goods, for which Lep Transport introduced a special van, designed and air-conditioned for the collection of delicate scientific equipment from the makers and delivery to their depot at Chiswick, where it was packed aboard the convoy vehicles. Some individual loads were valued at more than £60,000.

Documentation was probably the biggest headache in the organization of these movements and 30 sets of "Shipping Specification Forms" and "Contents Lists" were required for every shipment. These contained descriptions of contents and values in English and Russian, case numbers, gross weights, net weight, and much other information, all in both languages.

Another illustration of the type of movement which took place was one organized byContinental Ferry Trailers, Ltd., a division of the Transport Development Group.

For this the York Trailer Co., Ltd., built in nine days a 35-ft. long, tandem-axle Freightmaster of 2.000-cu.-ft. Capacity, complete with rear and side doors, and bearing .a large Soviet red star on each side.

The prime mover was a 244on-gross Atkinson with lefthand drive controls, supplied by Nightingale Engineering Co., Ltd., which had a Gardner 6LX engine developing 150 b.h.p.. and a David Brown gearbox.

It was fitted with a glass-fibre cab with wrap-round windscreen, heater and demisters. Two experienced .Dutch drivers, employed by the Koenig Company, of Rotterdam, took the unit to Moscow, with a load of display and ex'hibition material from the Lep warehouse at Chiswick.

The roads on the selected route are in the main, excellent, although the main road across Poland from Eastern Germany via Poznan and Warsaw to Brest has occasional patches of uneven cobbles, especially in the built-up areas, and is frequently interrupted by level-crossing gates. The majority of the convoys found little difficulty and the outward journey averaged between 5-10 days.

Driver Charles Hughes, who made the previously mentioned pilot journey during April, said the roads in Poland and Russia were rough and his vehicle took quite a shaking but nevertheless went "like a bomb." The engine was given a thorough check every night, but the only attention it required throughout the double journey was a pint of oil.

In addition to the road movement, Beck and Pollitzer chartered the m.s. " Baltic Express and shipped nearly 1,000 tons of exhibits to the Baltic port of Klipeda, an thence by train to Moscow.

Loading was completed in 13 days and the whole of th movements have been extraordinarily successful. Th company found the co-operation of exhibitors outstandins all deadlines were adhered to, and estimates of tonnag worked out well. Once the certificates of participation were granted, about the middle of March, the Sovie authorities gave every assistance and road convoy in this instance averaged six to eight days for the outwan journey.

To ensure smooth working at the Soviet border, till vehicles were divided into three main convoys spread ove three weeks, the slower vehicles setting out on Monday and Wednesdays, via Antwerp, and faster units leaving on Fridays, via Rotterdam.

Beck and Pollitzer are solely responsible for the organi zation in Russia, including lifting and handling at the fair ground.

In addition to Russian labour, 200 of their owr employees are on the spot and will remain until tin convoy vehicles return about the end of July. Afina problem successfully tackled was the parking of the vehicle: in a safe place away from Sokolniki Park during tilt exhibition, again with the willing co-operation of thc Soviet authorities.

Altogether a most satisfactory conclusion to the first Large movement of British transport vehicles overland to Russia.